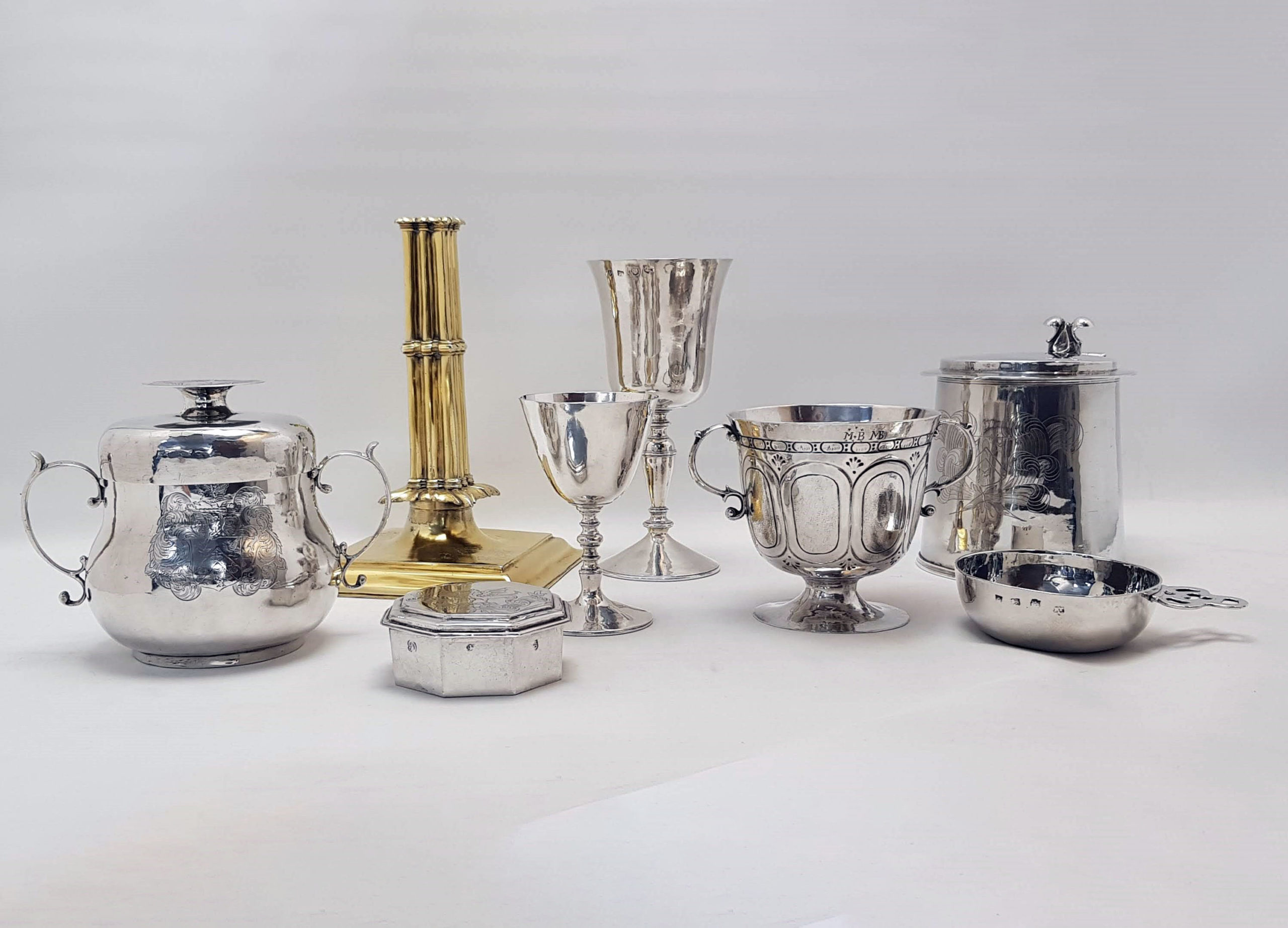 Collecting English 17th Century silver is a marvellous way to gain insight into a fascinating period of history, a time of great political and social turmoil marked by civil war and regicide. As we handle the beautiful hand-crafted pieces we can reflect on the changing monarchs and the murderous plots, plagues and a fire that destroyed most of London.

It’s quite remarkable that these unique pieces have survived over 300 years and are still able to provide enjoyment and utility of purpose as they did when they were first made.

Silver from the first half of the 17th century is very rare and mainly found in museums and major institutions however from time to time we have a small number of selected pieces to offer our clients. From the Restoration of the Monarchy in 1660 onwards the surviving art of the silversmith is more abundant and the fascinating array of domestic wares shed a light on the social history of that era.

Elizabeth’s 45 years on the throne, known as the “The Glorious Reign”, presided over many remarkable voyages of exploration, particularly the discovery of the Americas. This was the dawn of British colonisation and trade expansion and recognised by the formation of the East India Company in 1599.

During Elizabeth I’s reign enormous sums of money were invested in the works of the goldsmiths. Chalices were replaced throughout the realm by Royal command which resulted in mass destruction of old Church plate.

James was the son of Mary, Queen of Scots. James, a great-great-grandson of Henry VIII, succeeded to the English throne when Elizabeth I died childless.

James I’s reign enjoyed uninterrupted peace and comparatively low taxation which encouraged a steady production of new silverwares, assisted by the large quantities of silver ore arriving from the Americas.

Charles I’s reign was marked by his quarrels with the English Parliament and the subsequent English Civil War 1642-1645. Charles was executed for high treason in 1649.

Charles I was a man of great taste who invested vast sums in the arts during the early years of his reign. His Royal Collection became one of the most famous in Europe. This all changed abruptly when the Civil War broke out and most of the nation’s gold and silverwares were liquidated to raise funds for the war. With the exception of a 1639 inkstand nothing has survived in England from the Royal Plate. Silversmiths were forced to seek alternative employment, many becoming soldiers and others turning their skills to produce military wares.

Silver during this period became progressively less decorative. As the nation’s finances went into decline many pieces were made with little or no applied ornament possibly in an effort to save cost.

A Commonwealth was declared after the Civil War and execution of Charles I in 1649. During this period England and Wales (later also Ireland and Scotland) were ruled as a Republic.

Abolition of the Monarchy and the House of Lords

This period was marked by Cromwell’s continued fighting in Ireland and Scotland which resulted in economic depression, political unrest, and yet more depletion of silverwares. The Puritan regime strictly enforced the Sabbath, banned almost all form of public celebration. Silverwares manufactured during this period bear a more sombre decoration which is instantly recognisable.

The monarchy was restored after the collapse of the Protectorate and Charles I’s son was asked to take the throne.

The reign of Charles II was a landmark period in the history of English silver when demand resumed for fine quality silverwares by the King, aristocracy and gentry, all of whom needed to replace silverware destroyed during the Civil War period. The return of Charles from exile in Holland generated an interest in continental taste and richly decorative silver.

The first pressing task was to replace the Coronation Plate of which only the annointing spoon and three swords remained. Ritual feasting with a dazzling display of silver was regarded as an important assertion of the king’s wealth and status so Charles II immediately commissioned new banqueting and ceremonial church plate from the London goldsmiths. This incredible collection is now housed in the Tower of London.

Silver from this period often has an exuberant embossed decoration in deep relief, usually of flowers and foliage, sometimes with animals. During Charles II’s reign many articles still used today came into more general use such as the lidded tankard, twin handled porringer, and latterly a very early version of the tea and coffee pot.

James succeeded his brother Charles II. He ruled for only three years before the Glorious Revolution caused him to flee the country to make way for William of Orange

The Jacobite rising followed in an attempt to restore the Stuart dynasty culminating in James’s defeat in Ireland in 1690.

Silver from this period is rare due to the short period of James’s reign,

William, Prince of Orange, the husband of James’s eldest daughter Mary, was invited by Parliament to invade Britain whereupon the couple were crowned joint sovereigns in 1689.

The 1680’s saw the arrival of the Huguenot refugees in London, fleeing persecution in France and bringing such masters of their craft as Paul Lamerie, Paul Crespin, and Lewis Mettayer.

A craze for Chinese decoration swept through through the silver trade in the late 17th century as Europe became fascinated with the exotic East. Silverware of normal European forms was flat chased with charming scenes representing Chinamen, birds and Chinese landscapes. Read our article on Chinoiserie silver.

At this time the demand for bullion silver was so high that strict measures were needed to prevent the English coinage (of sterling silver grade) being clipped. In March 1697 the Britannia standard of silver was introduced which was 95.8% pure. New hallmarks were ordered, “the figure of a woman commonly called Britannia” and the lion’s head erased (torn off at the neck) replacing the lion passant and the leopard’s head crowned. This standard was obligatory until the Act was repealed in 1720.