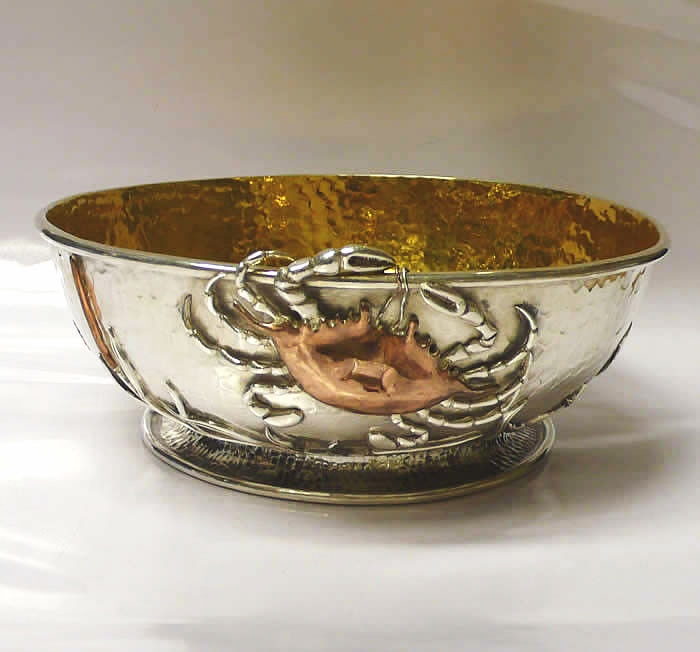 One of the remarkable sides to dealing in antique silverware is the way in which these inanimate objects seem to have a life of their own. Several years ago, on a buying trip, we saw a very strange mixed metals bowl with Chinese silver marks stamped underneath. Large and heavy, it was a bit ugly to tell the truth, however the giant copper crab attempting to climb over the rim of the bowl made it totally irresistible and so it came to sit on our shelf of antique Chinese silverwares for a short while before finding itself a new owner.

That would have been the end of the story if the very same bowl hadn’t reappeared as the subject of a periodic article by Adrien von Ferscht entitled “Qing Dynasty Mixed Metals Confections”. His fascinating essay explains the symbolism behind the manufacture of this rare and interesting bowl which, to Chinese eyes, has profound allegorical meaning. A redacted extract is reproduced below.

Decorative items made of mixed metals have existed throughout the many centuries of China’s silver-making history, but they were rarely noticeable during the 255-year Qing dynasty silver repertoire. 19th and early 20th century Chinese silversmiths used textures and various other techniques to dramatic effect and the use of copper and silver together can embolden what could otherwise be a potentially mundane item. Much of the 19th century Chinese silver lexicon consisted of traditional Chinese motifs imposed upon European forms, the meaning of which might not be apparent to a Western viewer however to Chinese eyes these motifs, particularly combinations of them, have profound allegorical meaning.

Adrien explains that the function of the hammered finish to the bowl, unusual for Chinese export silver, is to portray an underwater scene. The crab is in a waterscape of pond weeds that appear as if they are growing from the gravel sea bed (represented by the planished flared foot). Pondweed is one of the Twelve Imperial Symbols representing the element of water and is indicative of harmony and light – the number twelve is the number of Heaven, according to The Book of Rights – the Emperor was the Son of Heaven. Further around the bowl is a large conch shell nestling among a variant of seaweed.

Both the crab and the conch shell have significance as Chinese cultural symbols. The crab is representative of harmony in Chinese tradition.

The conch is one of the Eight Buddhist Symbols and originally is derived from older Hindu belief where it was considered a symbol of royalty. In Buddhist culture it is seen as being a symbol of the pure and true teachings of the Buddha. It is also perceived as a symbol of Buddha’s deep and resonant voice. In ancient times, conch shells were considered of high value and were used as currency, particularly white shells.

These excerpts taken from an article on Chinese mixed metals by Adrien von Ferscht. We recommend that you read the full article –

Adrien von Ferscht [皇甫安] is considered the leading expert for Chinese Export Silver and continues to research this unique silver category within the context of 2200 years of silver-making in China.