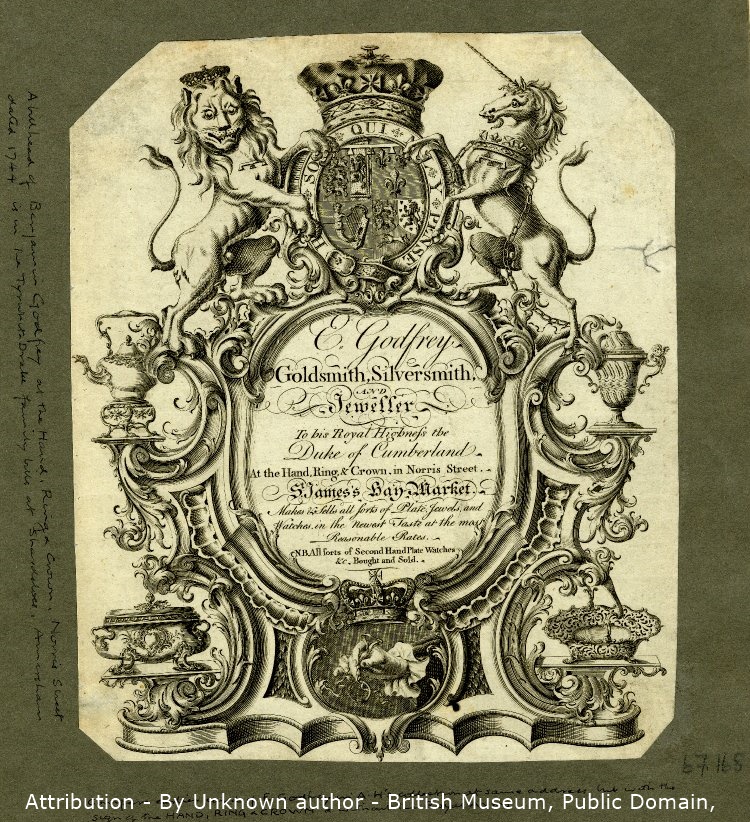 A significant number of strong and powerful female silversmiths achieved successful careers during the 18th century, a time when women enjoyed very few rights, especially in a male dominated industry. According to The Goldsmith’s Company records there were 63 women silversmiths working between 1697 and the Victorian era.

Eliza(beth) has been described as “the most outstanding woman goldsmith of her generation.” She didn’t have a formal apprenticeship, instead she must have learnt her trade as a child in the family’s London workshop belonging to her father Simon Pantin (born c.1680 died 1728). Pantin was a leading Huguenot goldsmith with a prestigious clientele and examples of his fine work can be seen in major museums and collections worldwide.

Eliza’s marriage in 1720 to London silversmith Abraham Buteaux (born 1698), godson of David Pantin, will have allowed her to continue her craft skills. It’s likely that Buteaux worked with one of the Huguenot workshops, and his work bears similarity to that of Simon Pantin – mainly plain cups, other hollow-ware and salvers. When Buteaux died in circa 1731 Eliza continued the business and entered her own widow’s mark as Elizabeth Buteaux.

The following year in 1732 Eliza married Benjamin Godfrey, Abraham Buteaux’s former journeyman, and Godfrey entered his first mark. His work displays strong Huguenot influences in design and fine execution, just as one would expect from such a prestigious family workshop, his later works incorporating rococo designs. Godfrey appears to have died in 1741 when Eliza entered her second widow’s mark as Elizabeth Godfrey. She was active until at least 1766 and her work was known for its high quality and sophisticated style.

Eliza’s trade card described herself as “Goldsmith, Silversmith and Jeweller to the Duke of Cumberland” and her success is evident by the considerable quality and quantity of her surviving work.

A rare early English silver cruet with two bottles for oil and vinegar and a small silver castor or pepperette. Excellent weight and large size. The heavy cut crystal bottles have multi-faceted cut decoration, typical of the period. The silver frame has an acanthus scroll carrying handle and side supports for the bottle tops and pepperette. The top of the frame has a hand engraved armorial which matches those on the bottle tops. Total weight of silver 955 grams, 30.7 troy ounces. Height 23.5cm (overall), 20.7cm (bottle), 9.5cm (pepper). Base measures 19.3 x 16.3cm. London 1751. Maker Elizabeth Godfrey.

Currently on sale from waxantiques

Excellent large size. A fine early English salver with the square form and plain styling typical of the period. The hand engraved border has a detailed band of scrolls, shells and matting with mythical face masks to the corners and erupting volcanoes to the sides. To the centre is a family coat of arms within a decorative cartouche. Weight 2194 grams, 70.5 troy ounces. Height 3 cm. Diameter 40 cm. London 1758. Maker Elizabeth Godfrey.