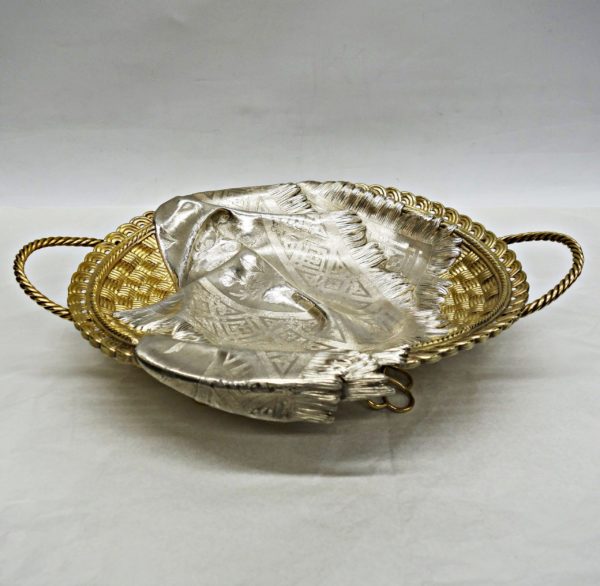 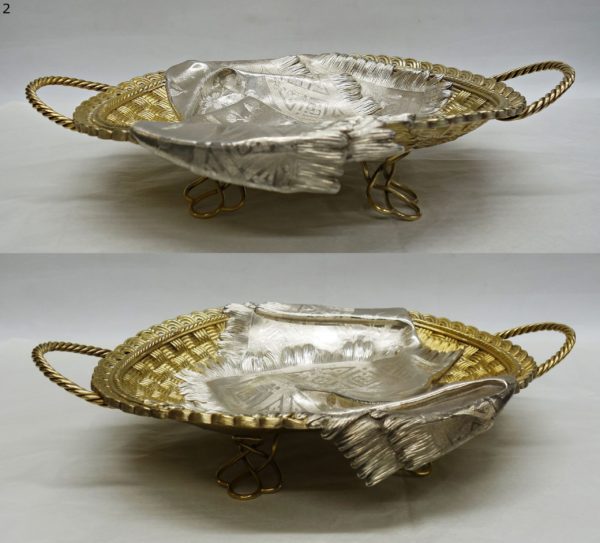 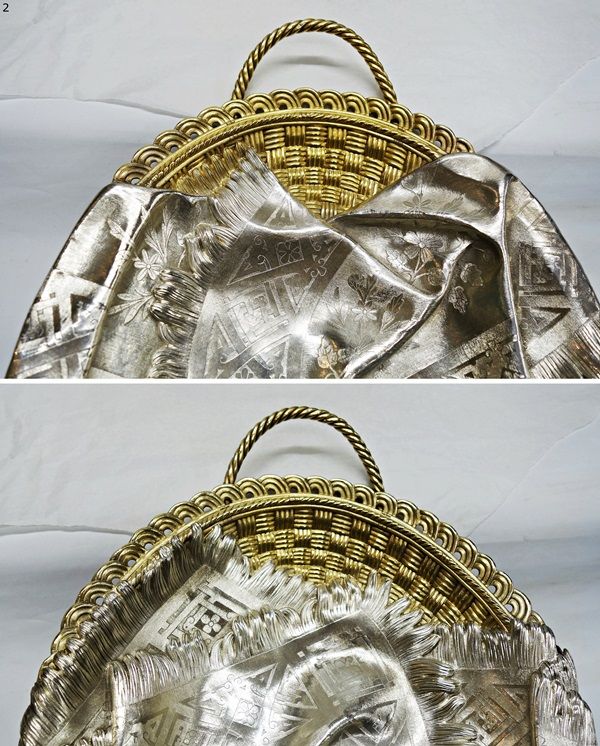 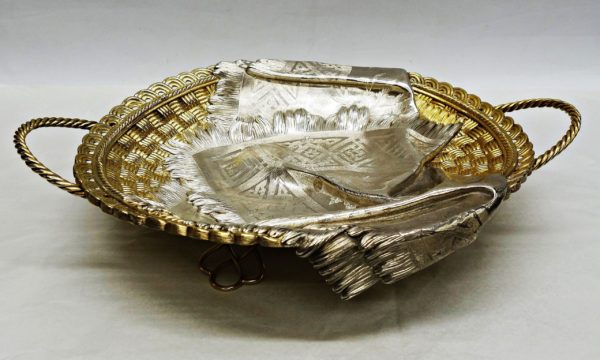 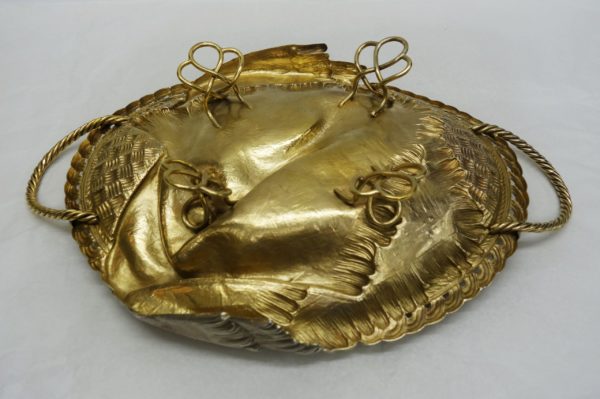 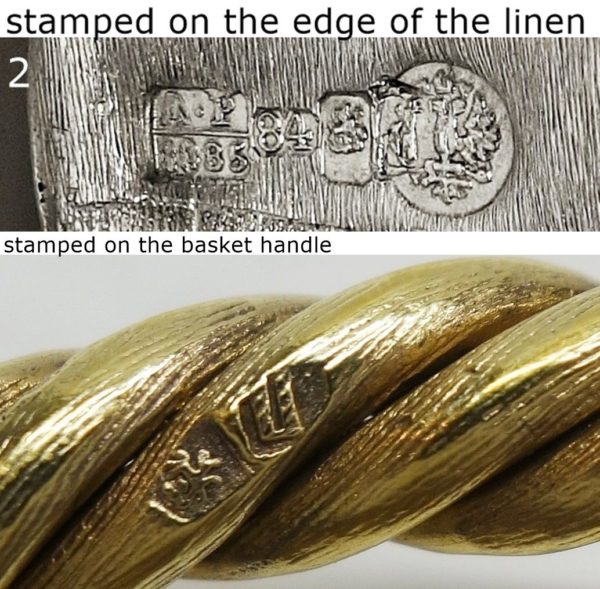 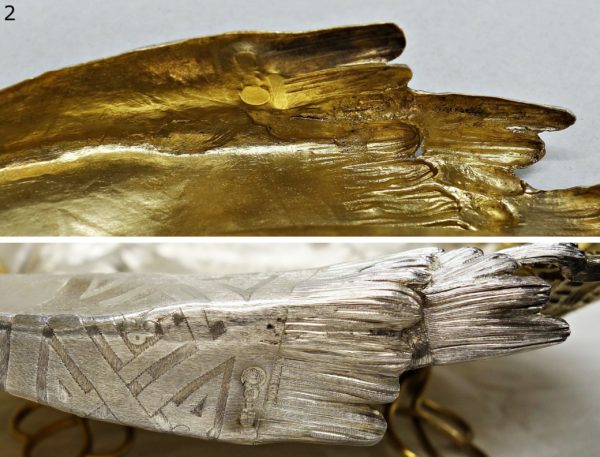 A rare antique silver dish fashioned as a white damask tablecloth draped over a gilt wickerwork basket. The quality of...

This beautiful basket is in very condition. The gilt is original and a pale gold colour. Stamped with Russian silver marks on the edge of the linen and the basket handle. There is a small repair on the edge of the cloth (see photo). Please note that this item is not new and will show moderate signs of wear commensurate with age. Reflections in the photograph may detract from the true representation of this item.

Jeweller, silversmith, goldsmith, enameller, merchant, industrialist. Hallmark: ?.?. or ?.??????????? in a rectangle. Born in the family of a serf called Akim Ovchinnikov in the village of Otradnoe in Moscow Province (1830). Sent by Prince Dmitry Volkonsky to study in Moscow (1842), where he served as an apprentice in the jewellery workshop of his brother Andrei (1844–50). Emancipated from serfdom (1850) and married a woman called Marfa (1850). Opened his own workshop with his wife’s dowry of a thousand roubles (1851). Acquired his brother’s workshop and opened a factory on First Goncharny (Potters) Lane in Taganka (1853). Employed a staff of four hundred (1854) and six hundred craftsmen and apprentices (1855). Appointed official purveyor to the future Tsar Alexander III (1865), King Victor Emmanuel II of Italy (1873), Grand Duke Mikhail Nikolaevich (1878) and King Christian IX of Denmark (1888). Awarded the Légion d’honneur (1867) and the Order of the Iron Crown (1873). Founded a school for 130 goldsmiths and silversmiths (1871). Opened a factory and shops in St Petersburg at 35 Bolshaya Morskaya Street (1873) and the former premises of Sazikov at 29 Bolshaya Morskaya Street (1900). Member of the Moscow City Duma (1876–88). Died and buried at Kalitniki (Moneybags) Cemetery in Moscow (1888), where his work was continued by his sons Mikhail, Alexander, Pavel and Nikolai (1888–1917). Contributed to exhibitions (from 1865). Contributed to the Pan-Russian Manufacturing Exhibition in Moscow (1865, gold medal), Exposition Universelle in Paris (1867), Weltausstellung in Vienna (1873), Pan-Russian Exhibition of Art and Industry in Moscow (1882, silver medal), Exposition Universelle in Paris (1900), Princess Dagmar – Empress Marie Feodorovna at Christiansborg Palace in Copenhagen (1997), Golden Treasure Trove of the Russian Museum at the Russian Museum in St Petersburg (1998), Treasures of the Moscow Kremlin at the Alexander Radischev Museum of Art in Saratov (2005) and Samara Regional Museum of Art in Samara (2005–06), Empress Maria Fedorovna: A Life and Fate at the Federal Archives Exhibition Hall in Moscow (2006), Russian Silver of the 18th–20th Centuries from the Collection of the Moscow Kremlin Museums at the Samara Regional Museum of Art in Samara (2007–08), Enamels of the World 1700–2000 from the Khalili Collections at the Hermitage Museum in St Petersburg (2009–10), Russian Silver (18th to Early 20th Centuries) at the Ivan Shemanovsky Museum and Exhibition Complex of the Yamalo-Nenets Autonomous District in Salekhard (2010–11), Golden Age of Russian Jewellery Art at the Vladimir-Suzdal Museum Complex of History, Architecture and Art in Vladimir (2010–11), Russian Jewelry – Traditions and Modern Day at the Estet Jewelry House in Moscow (2011), Splendour and Glory: Art of the Russian Orthodox Church at the Hermitage Amsterdam in Amsterdam (2011), Gold: Metal of Gods and King of Metals at the History Museum in Moscow (2012), Fabergén aika at the Museum Centre Vapriikki in Tampere (2006), Il gioielliere degli ultimi Zar at La Venaria Reale in Turin (2012), World of Fabergé at the Shanghai Museum in Shanghai (2012–13), Fabergé: Legacy of Imperial Russia at the Hong Kong Heritage Museum in Hong Kong (2013) and Fabergé: A Brilliant Vision at the Houston Museum of Natural Science in Houston (2013).