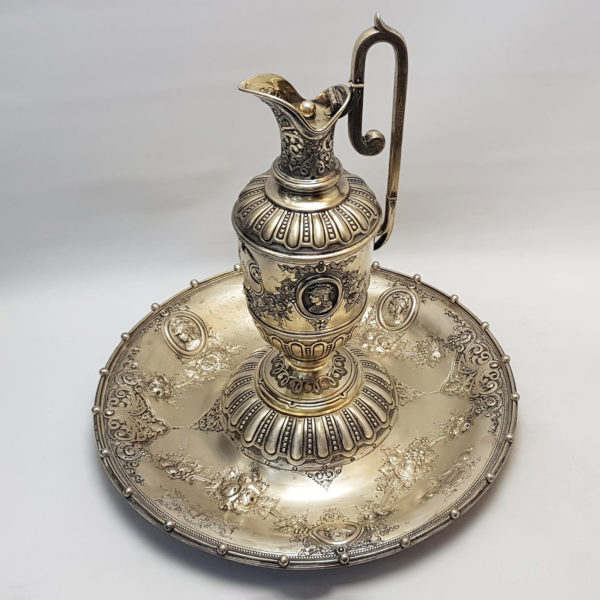 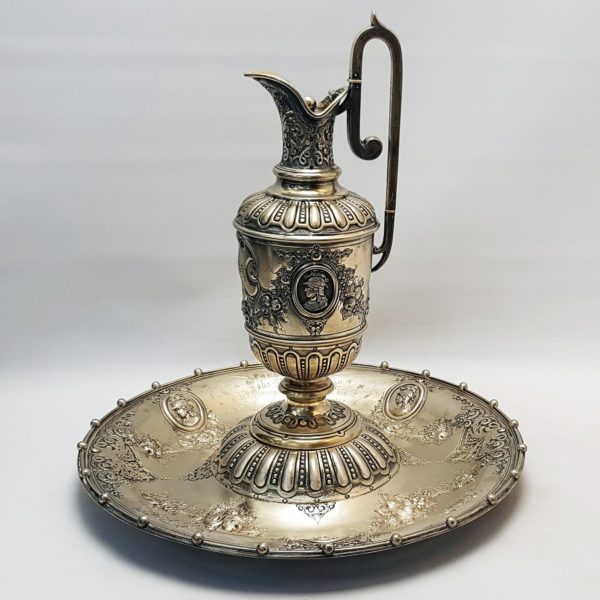 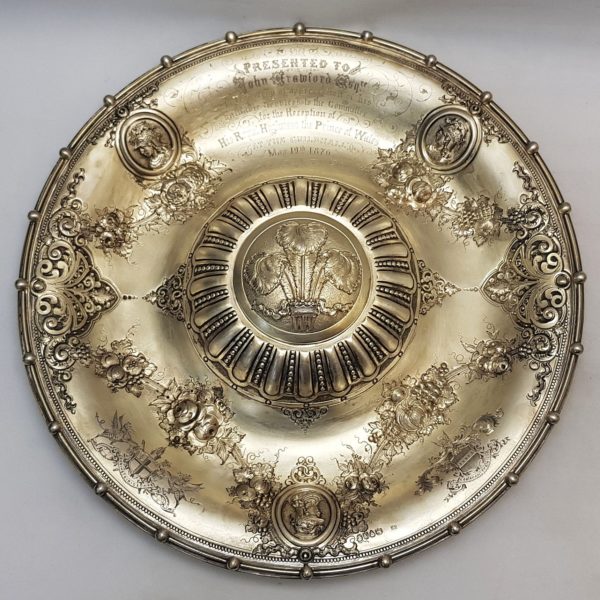 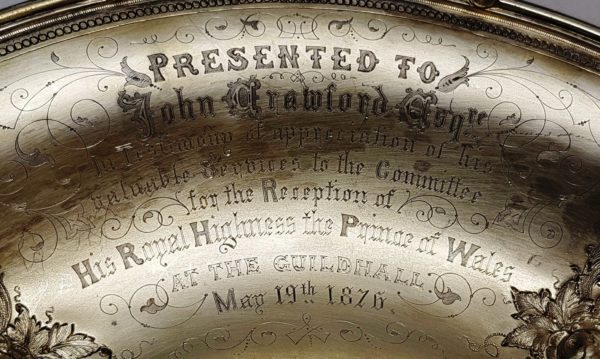 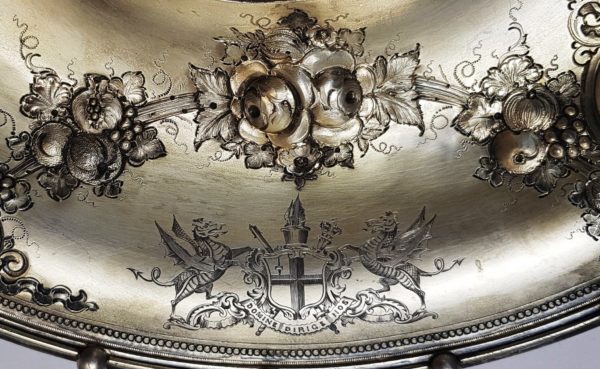 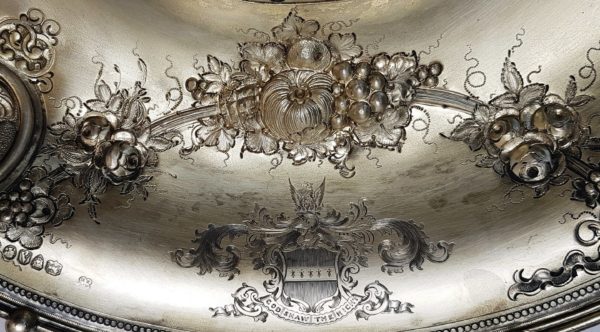 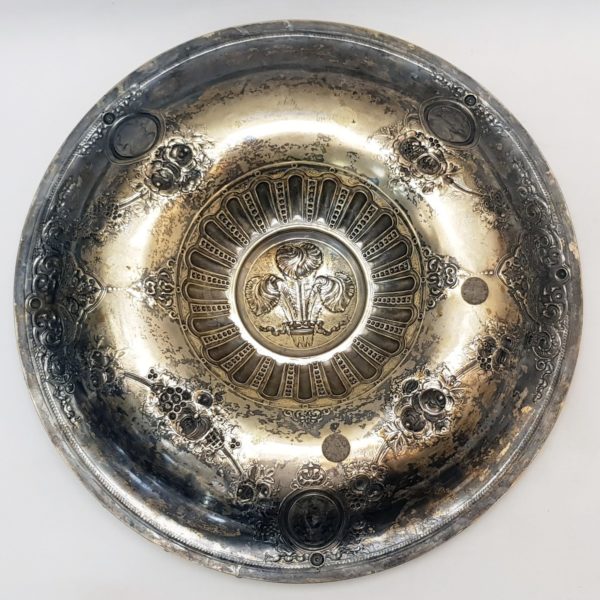 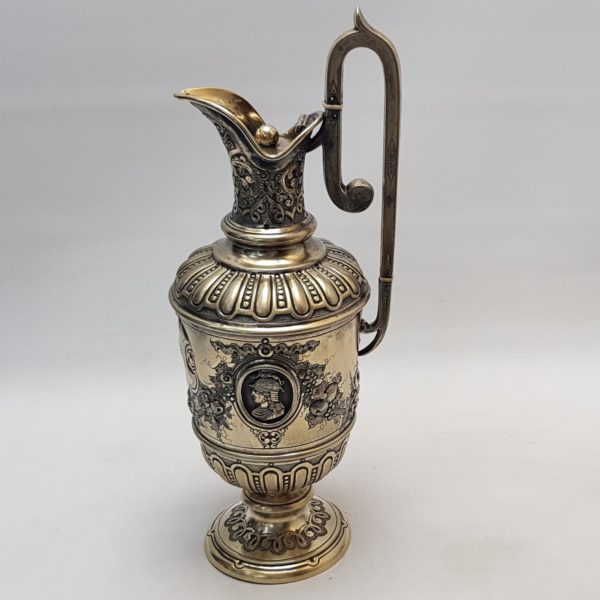 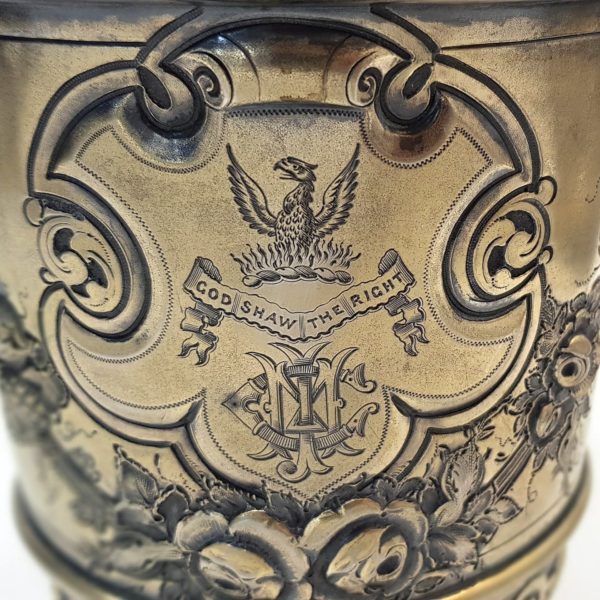 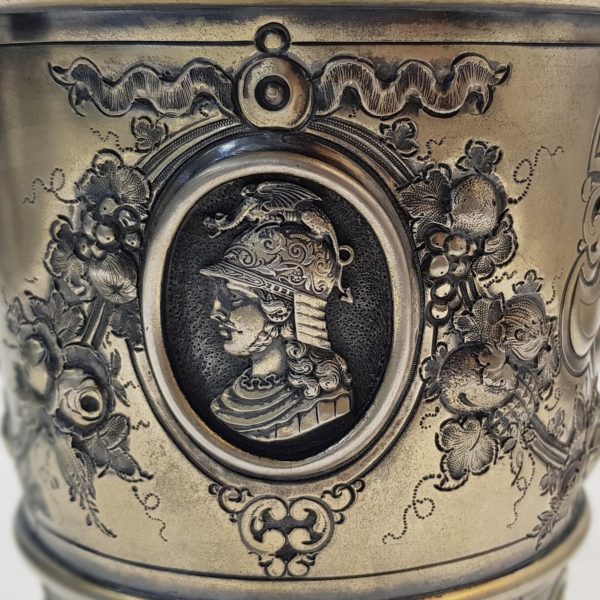 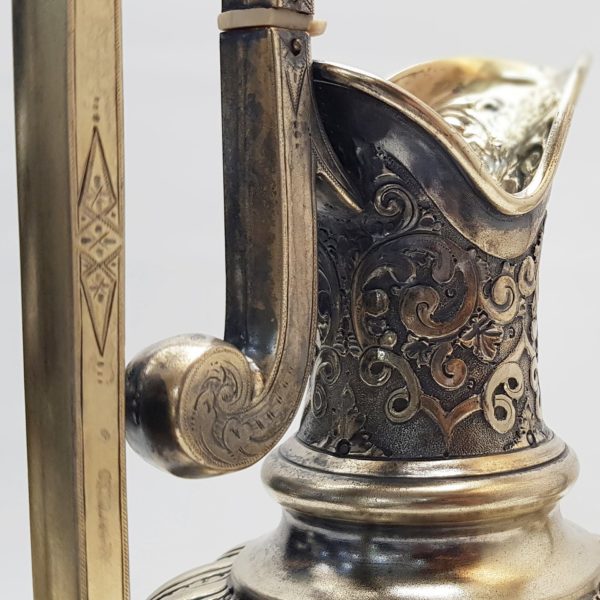 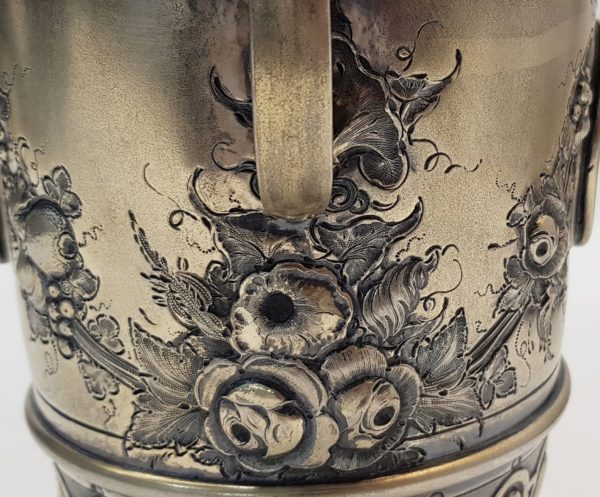 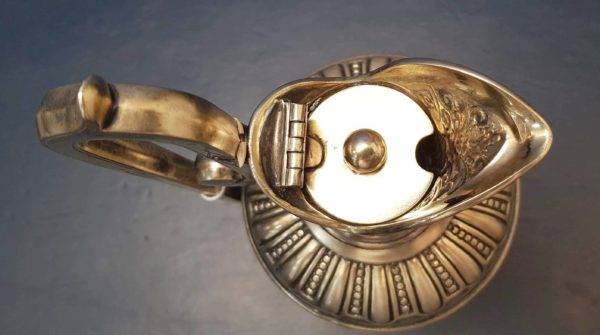 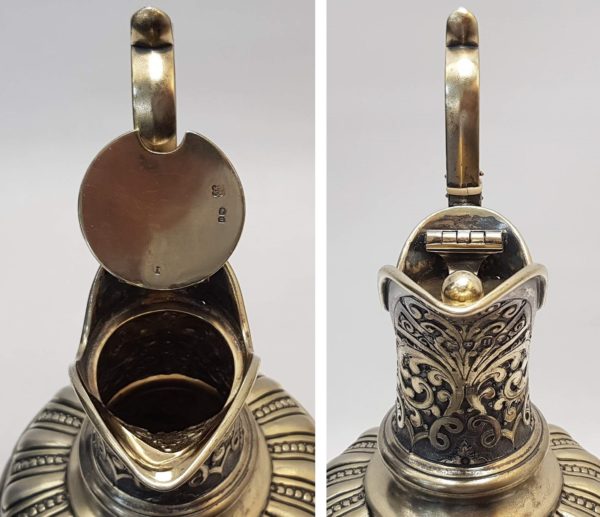 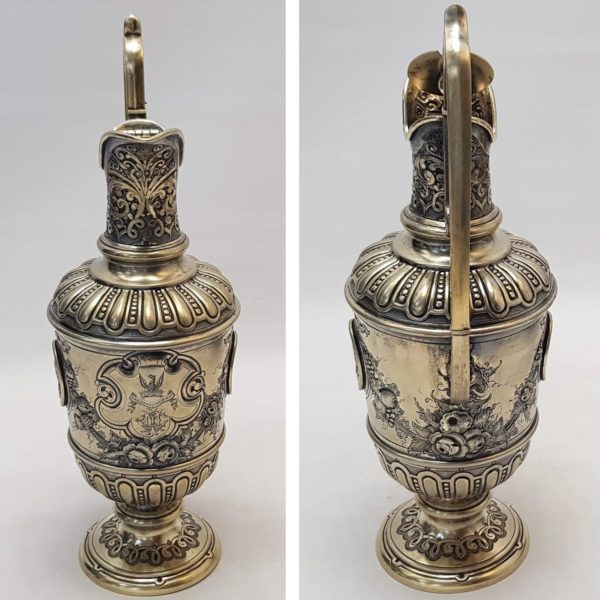 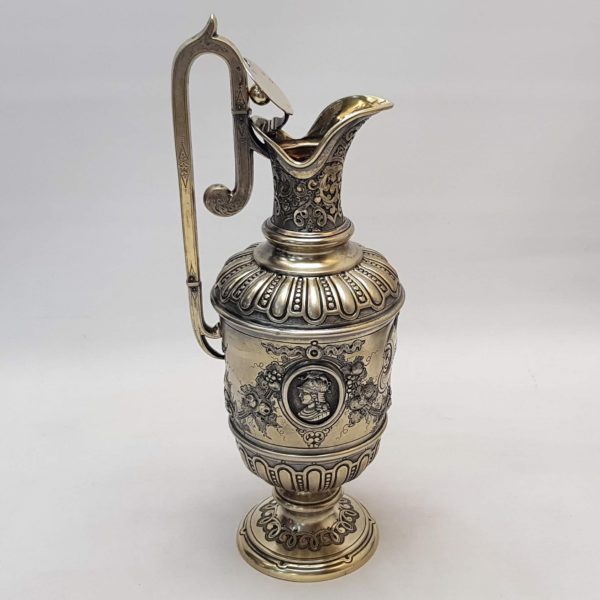 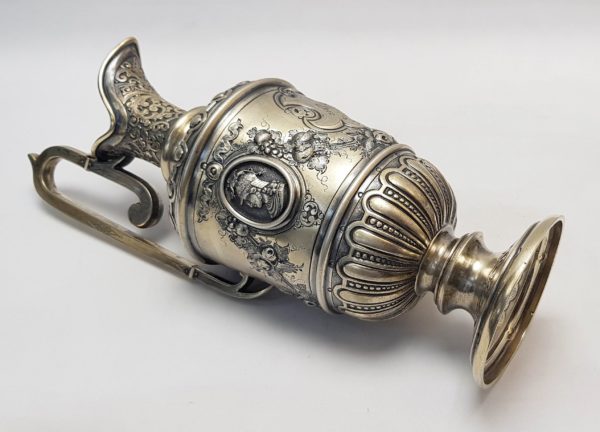 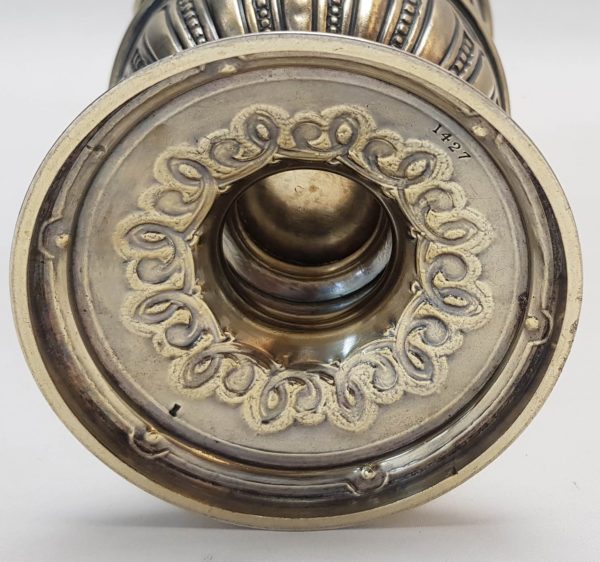 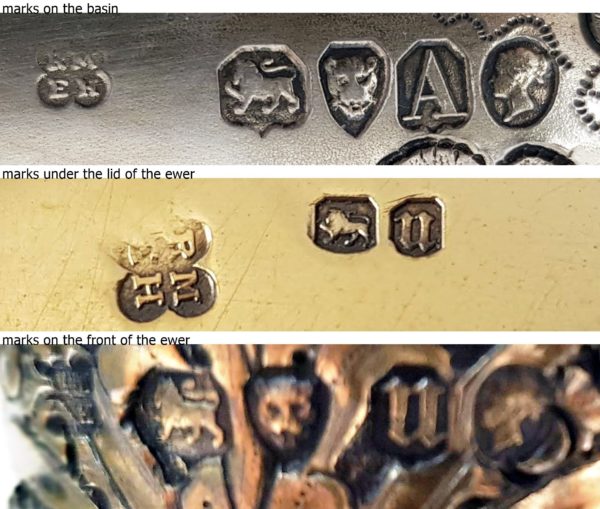 A very rare and prestigious item. This magnificent gilt silver armada jug and stand was presented in honour of the...

A very rare and prestigious item. This magnificent gilt silver armada jug and stand was presented in honour of the Guildhall banquet for the Prince and Princess of Wales’s return from India. The tall jug, of vase shape form, has bands of classical motifs and ribbing, the centre with deep relief swags of ribbons and fruit with centre medallions. This superb decoration is repeated on the matching base which has a raised central dome decorated with the Prince of Wales feathers. The front of the basin has a large presentation inscription dated 1876.

A finer ewer and basin would be hard to find.
Defra Ivory Registration S44DZVAJ

Inscription. “Presented to John Crawford Esq. A Testimony of appreciation of his valuable services to the Committee for the Reception of His Royal Highness the Prince of Wales. At the Guildhall. May 19th 1876”.
The Prince of Wales was Prince Albert, (1841-1910) eldest son of Queen Victoria, later crowned King Edward VII in 1901. The Princess of Wales is Alexandra, later Queen Alexandra.

Literature. In medieval times the ewer and basin was one of the most important items on the dining table as diners continually needed to wash their food-covered hands. This purpose fell into disuse once the fork was introduced during the 17th century. The term “armada” jug refers to the early form of this ewer which was vase shaped, of tapering cylindrical form, with broad decorative borders. This form was in use during the 16th century, a similar date to the Spanish Armada battle of 1588.

Both pieces are in very good condition. The gilt has no wear. The gilt on the base is slightly paler than the ewer.

The firm Martin Hall was established as a partnership in 1820 in Sheffield by Henry Wilkinson and John Roberts, trading as Wilkinson & Roberts. Wilkinson left in 1836. In 1846 John Roberts became partners with Ebenezer Hall (his apprentice in 1836) as Roberts & Hall. In 1854 Richard Martin (of Martin Brothers & Naylor) and Joshua Hall (brother of Ebenezer Hall) entered the partnership and the firm became Martin, Hall & Co. In 1866 the firm became a limited company. Although originally based at Shrewsbury Works, Sheffield the company also had factories in London and Birmingham with showrooms in London and Glasgow. The firm participated in the 1851 Great Exhibition, the International Exhibition (1862), the Sydney Exhibition (1879), the Melbourne Exhibition (1881) and the 1915 British Industries Fair. In liquidation 1933, Closed by 1936. Their full name was Richard Martin, Ebenezer Hall & Co.