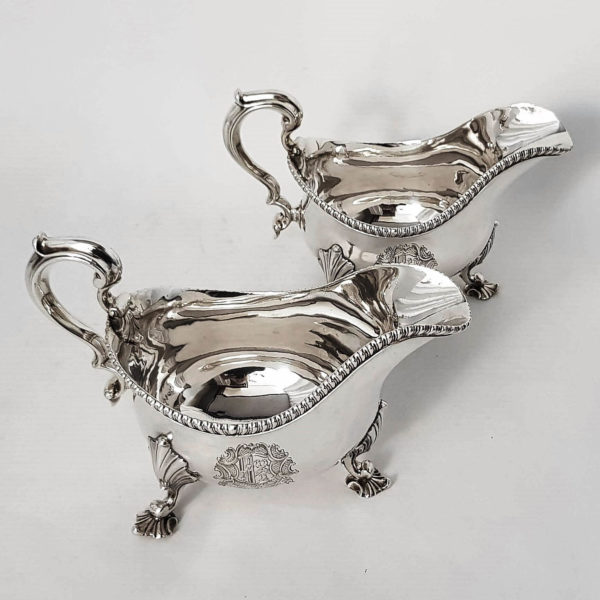 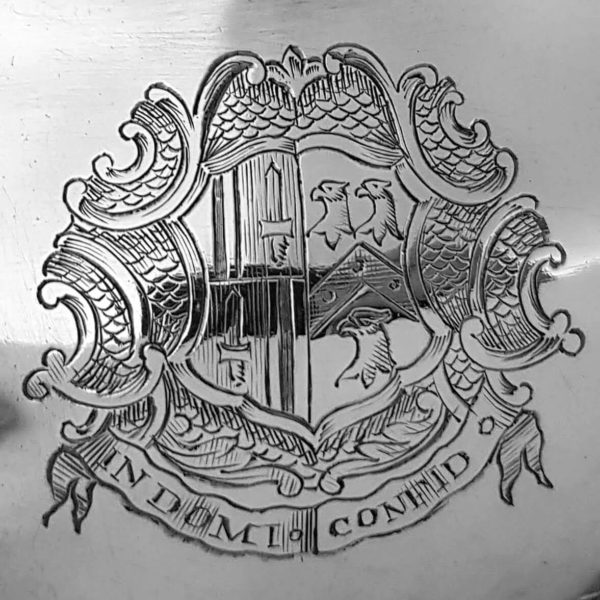 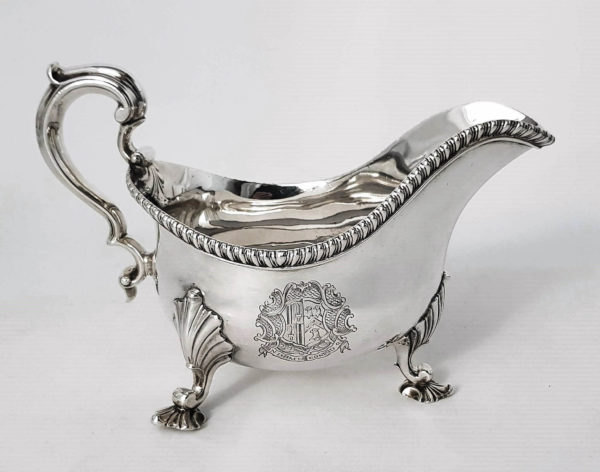 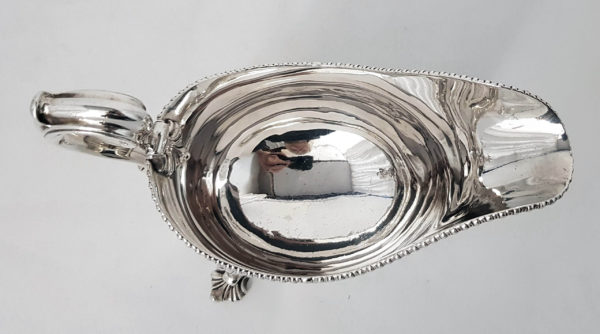 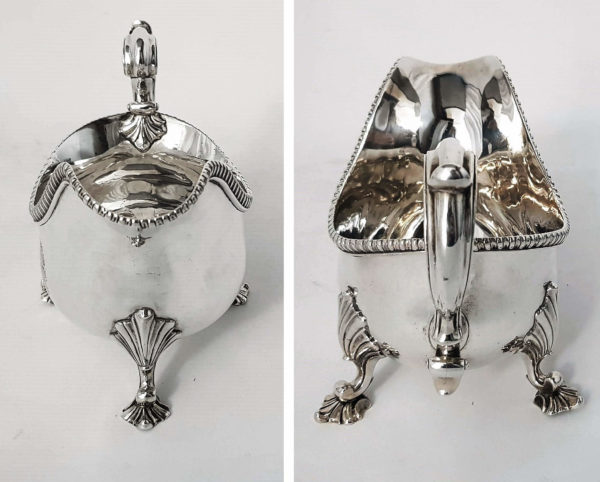 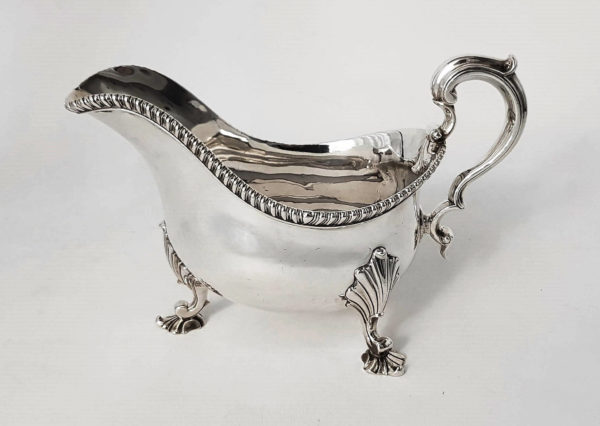 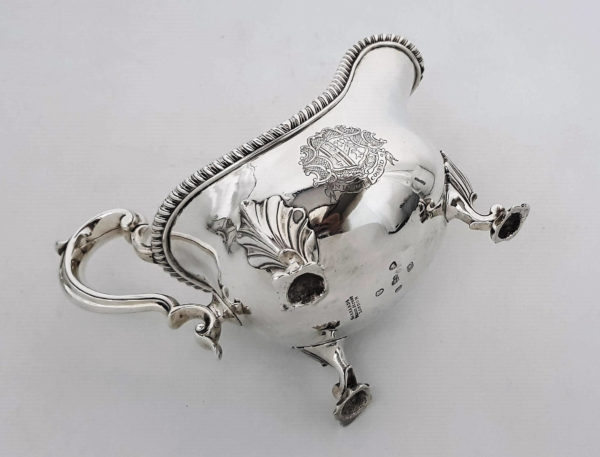 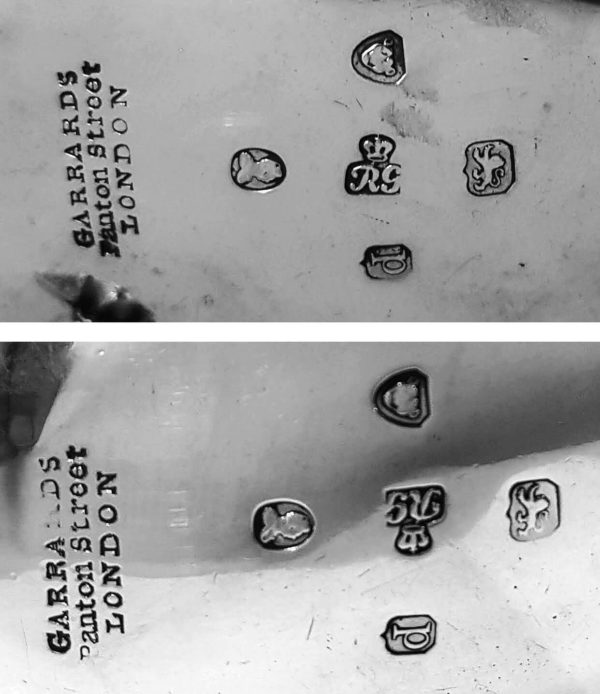 A magnificent pair of silver sauceboats by Robert Garrard with broad gadroon borders and shell feet. Exceptional quality and weight....

A magnificent pair of silver sauceboats by Robert Garrard with broad gadroon borders and shell feet. Exceptional quality and weight. Each has a large hand engraved armorial to the front with the motto “In Domi Confid”.

Marks. Stamped underneath with a full set of matching English silver hallmarks.

Literature. The Antique Silver Sauceboat was made its first appearance in the early 1700’s. The original form had two lips, one at each end, with two scroll handles and a spreading foot. This was quickly followed by the single lip form and by the 1740s nearly all examples had the traditional three feet. Usually oval, they were very occasionally octagonal or circular, and were originally intended for cold sauces.

These sauceboats are in very good condition. The engraving is still crisp.

The original company that was to become Garrard was founded by George Wickes (1698–1761). Wickes entered his mark in 1722, moving to Panton Street off Haymarket in central London in 1735 as a goldsmith and provider of jewellery and other luxury items to aristocratic patrons. Wickes, an accomplished silversmith known for his work in the rococo style, gained the patronage of Frederick, Prince of Wales. Two apprentices of Wickes, John Parker and Edward Wakelin, purchased the business on Wickes’ retirement in 1760, replaced by John Wakelin and William Taylor in 1776. Following the death of William Taylor, Robert Garrard became a partner in 1792 and took sole control of the business in 1802. On his death in 1818, his three eldest sons, Robert Garrard II, James Garrard and Sebastian Garrard took control by trading as R., J. and S. Garrard. James retired in 1835 and the company became R & S Garrard. In 1843, Queen Victoria appointed Garrard to the position of Crown Jewellers, leading to the production of numerous pieces of silverware and jewellery for the Royal Family, as well as the upkeep of the Crown Jewels. When Robert Garrard II died in 1881 the business passed to his nephew, James Mortimer Garrard. The company remained in the hands of the Garrard family until the death of Sebastian Henry Garrard, great-grandson of Robert Garrard senior, in 1946. The name Garrard & Company Ltd was registered in 1909, and the company moved to new premises in Albemarle Street in central London in 1911.