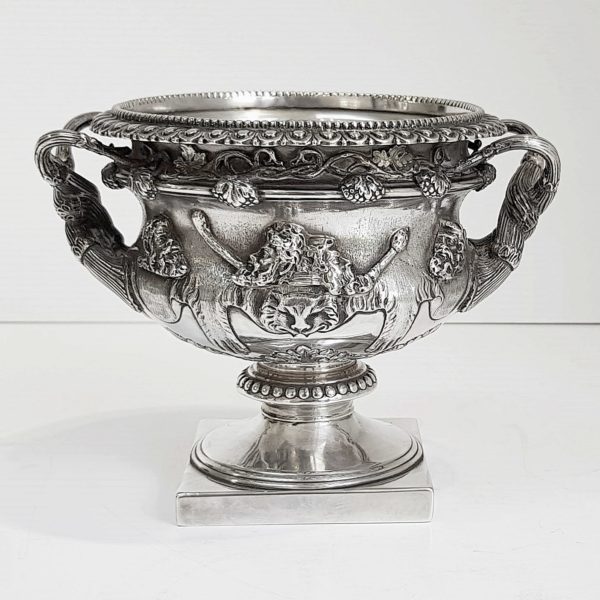 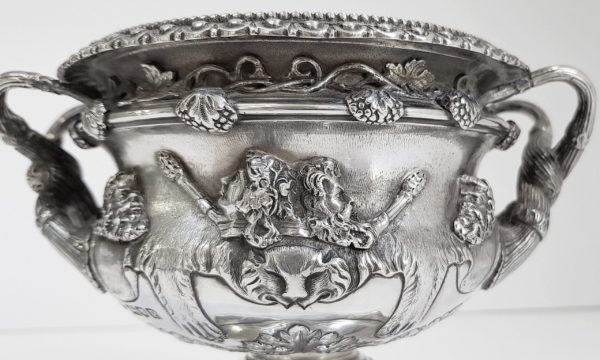 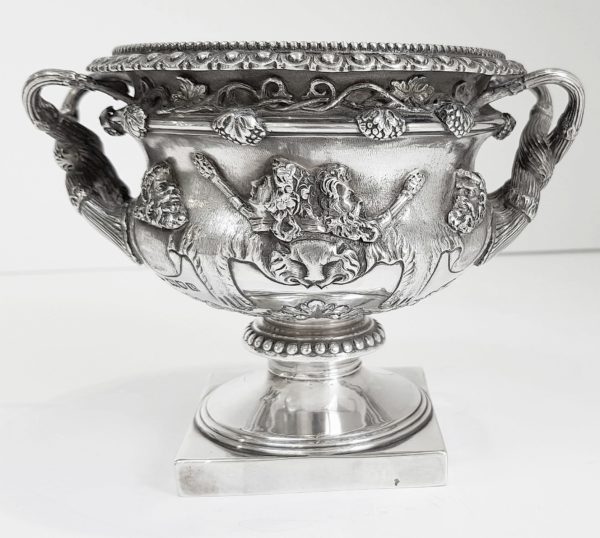 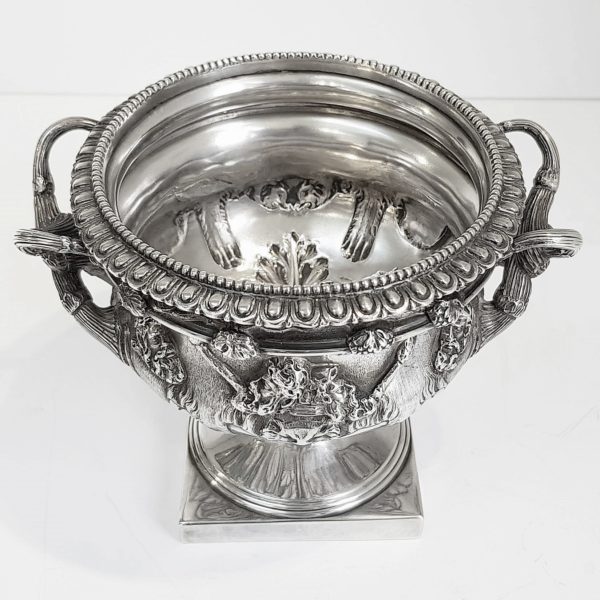 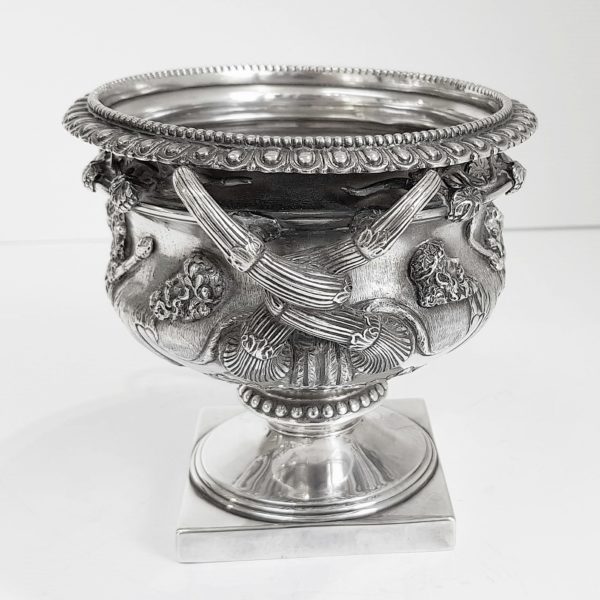 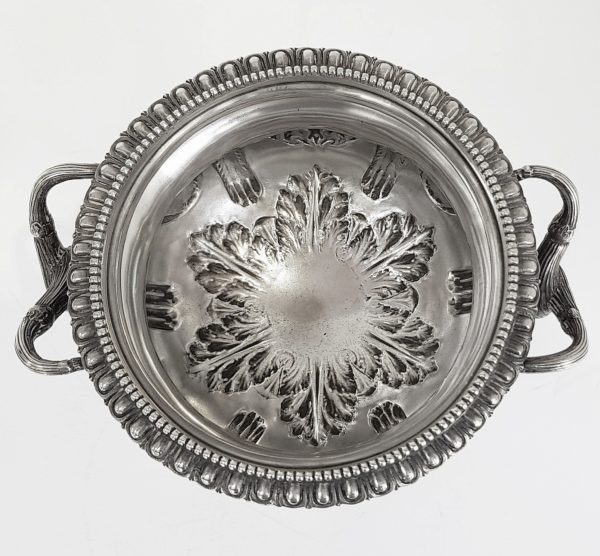 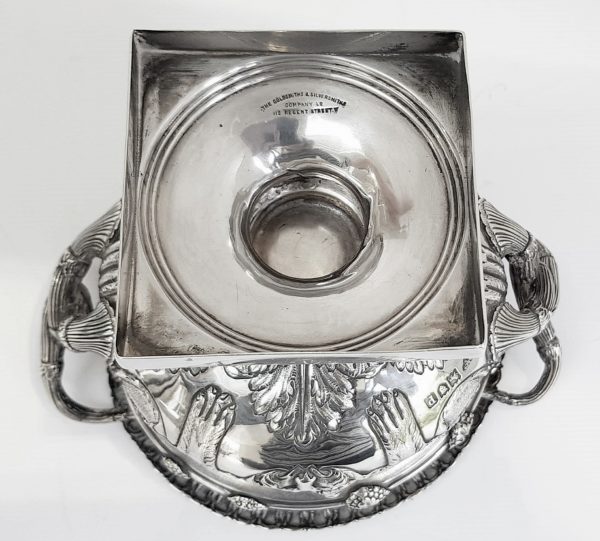 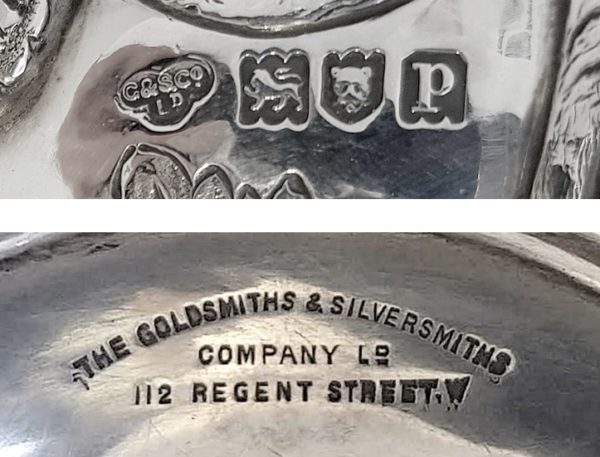 An excellent quality antique silver vase modelled after the famous Roman antiquity discovered at Tivoli during the 18th century. Heavy...

An excellent quality antique silver vase modelled after the famous Roman antiquity discovered at Tivoli during the 18th century. Heavy gauge silver and exquisite detail. Small size. Of typical campana form with entwined vine handles, the vase is applied with Bacchanalian heads and flaming torches, below which there is a lion’s head and paws to front and back on a background of hand executeded lion’s “fur”.

Literature. The original Warwick Vase is an ancient Roman marble vase discovered at Hadrian’s Villa in Tivoli around 1771 by Gavin Hamilton, a Scottish painter-antiquarian and art dealer in Rome. Though in bad repair, he sold it to the great collector Sir William Hamilton who commissioned James Byre and Giovanni Battista Piranesi to undertake extensive restoration, during which elements were added and improved. Sir William hoped to sell the vase to the British Museum, as he had a large number of artefacts. After it was refused, Hamilton gave it to his elder nephew, George Grenville, 2nd Earl of Warwick. At Warwick Castle, the vase was kept in an especially built greenhouse.

Although it was quite usual for ancient vases held in British collections to be copied in plaster and other materials, Warwick refused until Lord Lonsdale persuaded him. Lonsdale selected the sculptor William Theed, who worked for the royal silversmith Rundell, Bridge and Rundell, for the task. The project was not completed but the casts were sent to Paris and the two bronze copies were made, one is at Winsor, the other in the Fitzwilliam in Cambridge, see Haskell and Penny, Taste and the Antique: The lure of Classical Sculpture 1500-1900 (Yale 1981). Since then, copies of varying sizes and materials have been made. The Vase is the model for the cup awarded at the Australian Open Tennis Championship.

The original vase was purchased by the Metropolitan Museum of Art in 1978 but an export licence was refused and it now kept at the Burrell Collection in Glasgow.

This outstanding vase is in very good condition. Stamped on the body with a full set of English silver hallmarks. The decorative detail is still very sharp. Please note that this item is not new and will show moderate signs of wear commensurate with age. Reflections in the photograph may detract from the true representation of this item.