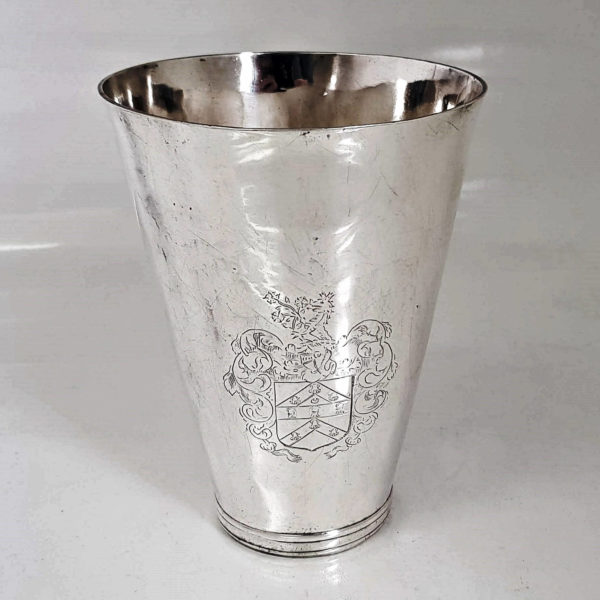 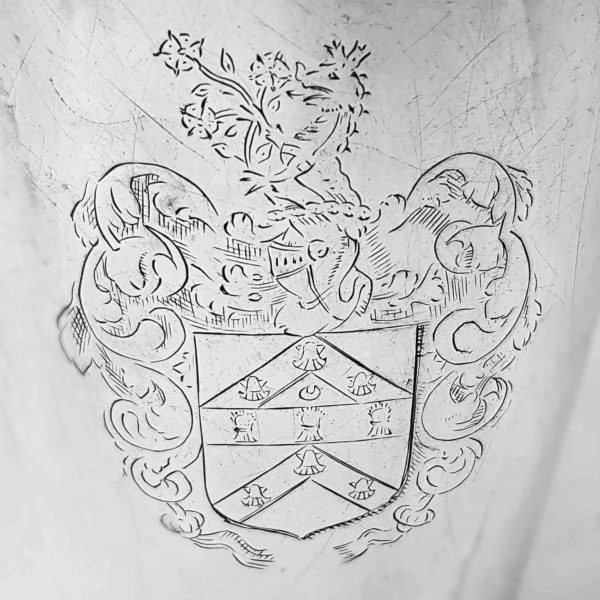 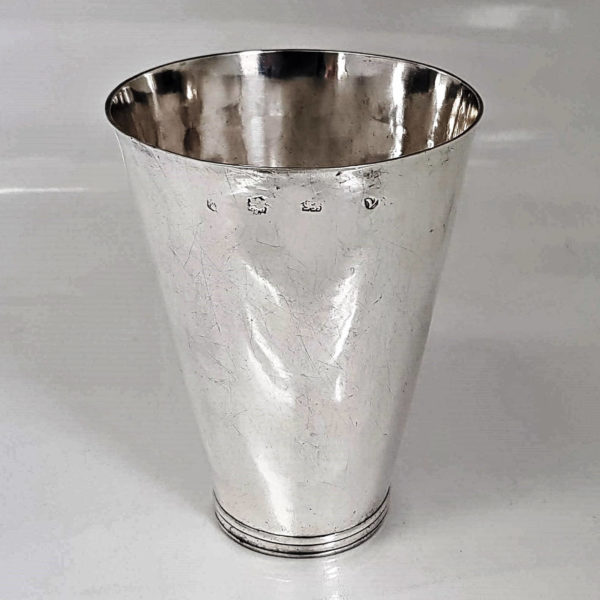 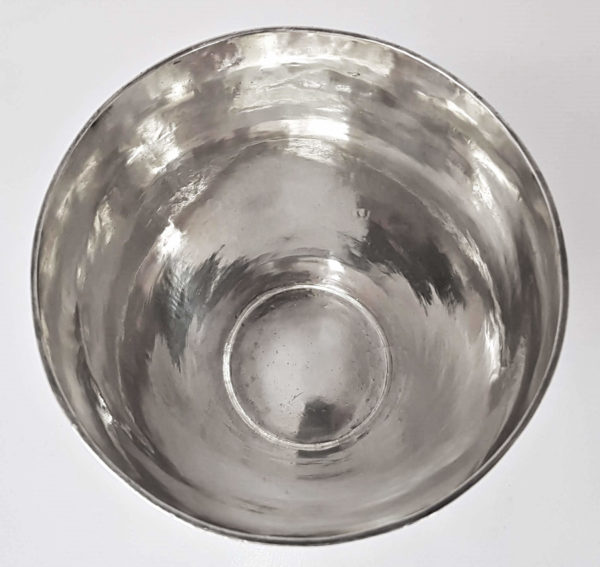 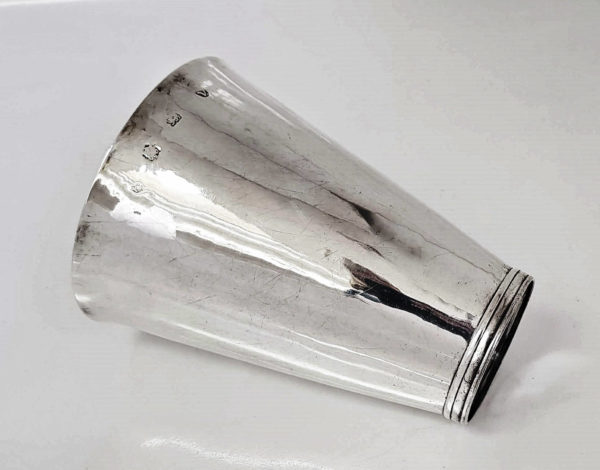 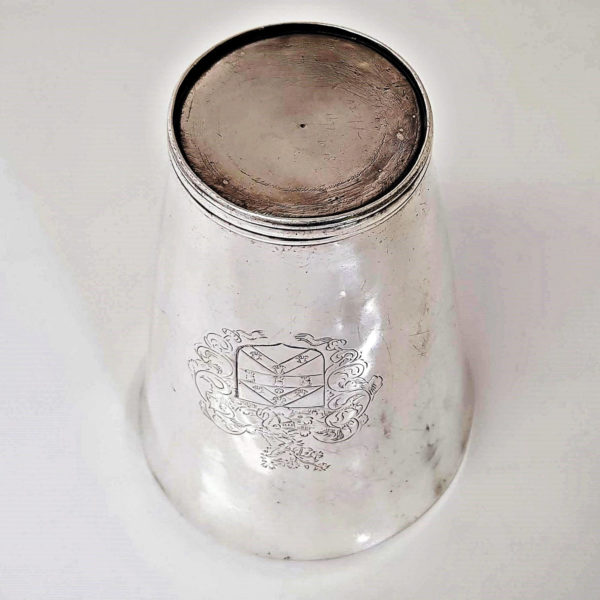 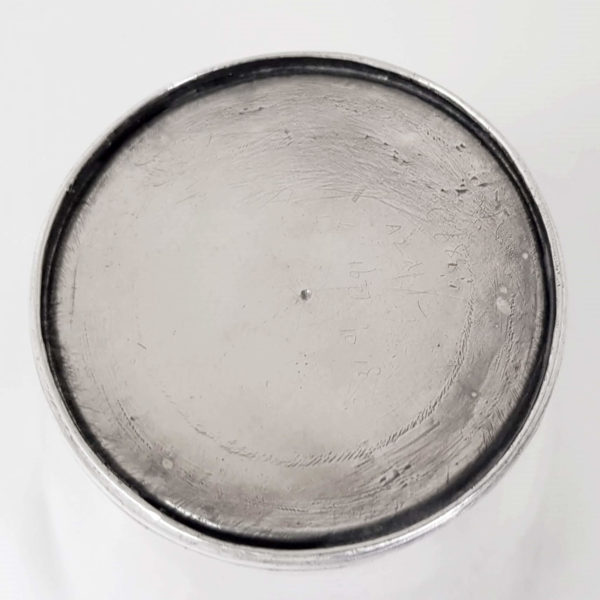 An early English silver beaker of unusual tapering form with a simple applied foot rim. Very plain style. Large size and good weight. To the front is a well executed armorial, hand engraved, the style is typical of the Charles I period with the shield surmounted by a crest and flowing mantling, The arms are for Dr Thomas Eden, Master of Trinity Hall, Cambridge.

Maker’s mark attributed to “possibly” Robert Gregory by David Mitchell in his Silversmiths in Elizabethan and Stuart London.

Eden was elected to a fellowship at Trinity Hall, Cambridge in 1599 and held the office of reader of civil law for many years. Succeeding posts include Professor of Law at Gresham College, London in 1613. In March 1615, he held a disputation for the degree of LL.D. before James I at Cambridge, which earned great applause. He was created doctor in the following year and later that year was admitted a member of the College of Advocates at Doctors’ Commons.

Eden was elected Member of Parliament (MP) for Cambridge University in 1626 and in the same year was chosen master of Trinity Hall. He was re-elected MP for Cambridge University in 1628 and sat until 1629 when King Charles decided to rule without parliament for eleven years. In 1630 he was appointed chancellor of the diocese of Ely in 1630, also commissary of Westminster, Bury St. Edmunds, and Sudbury, and one of the masters in chancery.

In April 1640, Eden was re-elected MP for Cambridge in the Short Parliament and in November 1640 was re-elected MP for Cambridge University for the Long Parliament. On 3 May 1641, he joined with those members of the House of Commons who took the Protestation. In April 1645, he was one of the committee of parliament, consisting of six peers and twelve commoners, which was appointed by the two houses to manage the affairs of the admiralty.

Eden died in London on 18 July 1645, and was buried on 2 August in the chapel of Trinity Hall, Cambridge, where a mural monument with a Latin inscription was erected to his memory. A Latin oration was delivered at his funeral by Thomas Exton.

Eden, who was highly commended as an advocate by Thomas Fuller, was a munificent benefactor to Trinity Hall. There is a tankard, with similar engravings to those on the beaker, in the collection at Trinity Hall, Cambridge.

The silver beaker is in very good condition. The engravings seem contemporary and have very little wear. Fully stamped with a clear set of English silver hallmarks. Please note that this item is not new and will show moderate signs of wear commensurate with age. Reflections in the photograph may detract from the true representation of this item.

Robert Gregory, free by patrimony in 1629, Robert was very active during the 1630’s and bound his first 2 apprentices in 1638. Like many other craftsmen of the time, he experienced difficulties during the Commonwealth period and in 1652 he was granted a Sir James Pemberton pension of 12d per week. In 1659, when Robert failed in his application for an Almsman’s place he received help from the Company’s charities with 16 gifts between 1657 and 1661 totalling £10 10s.