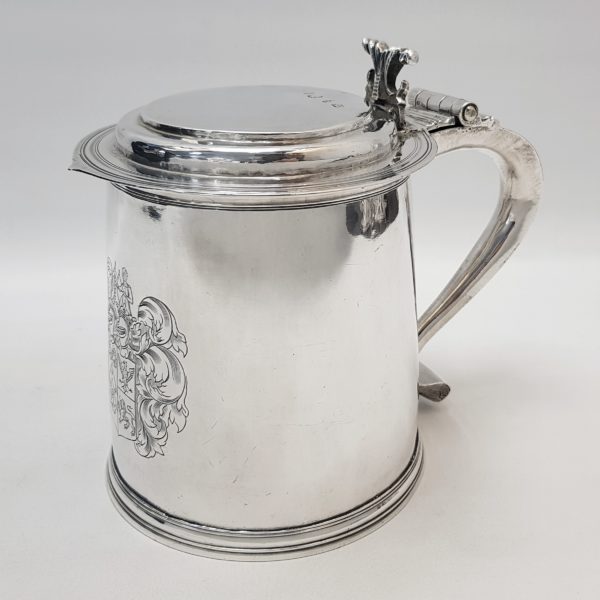 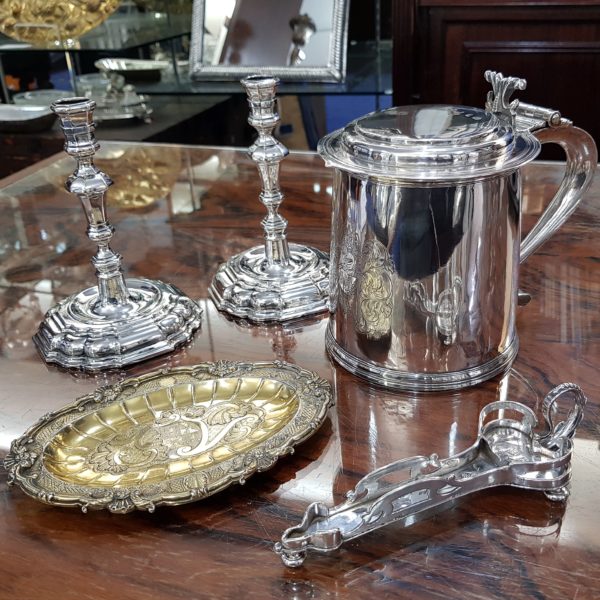 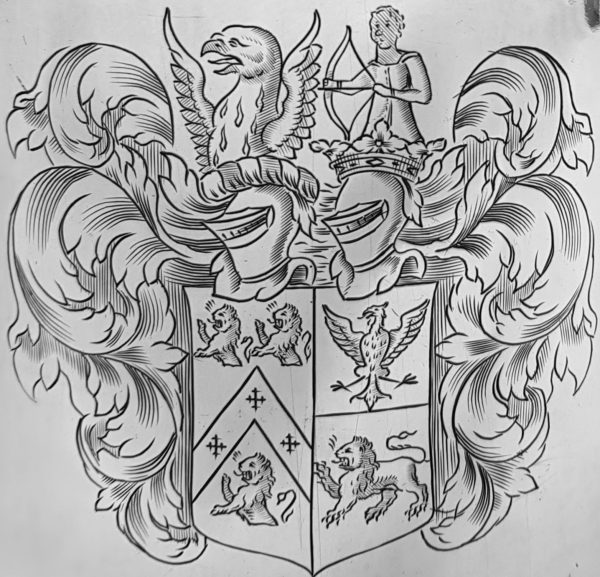 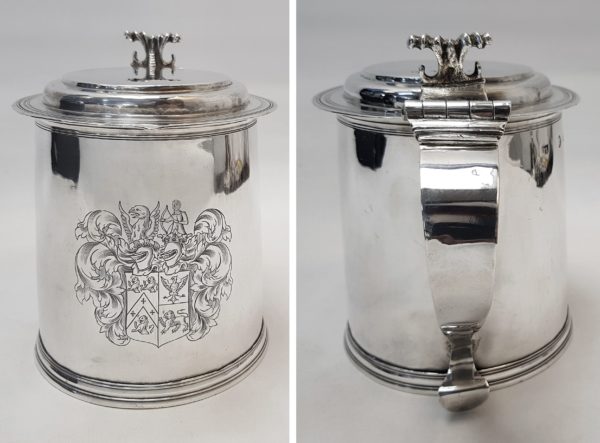 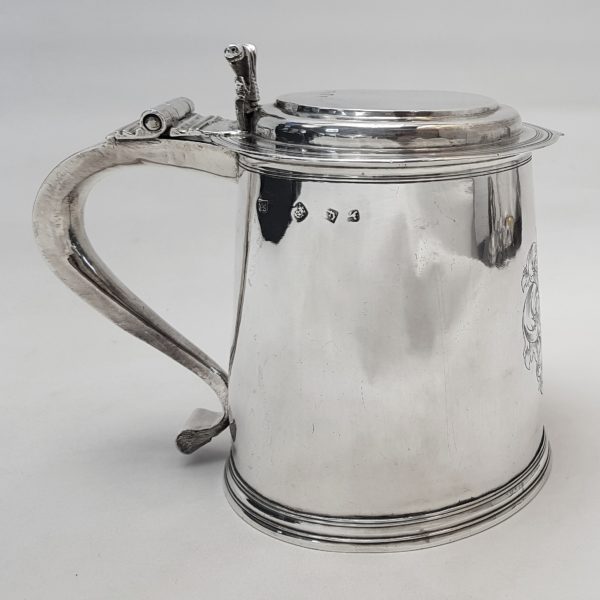 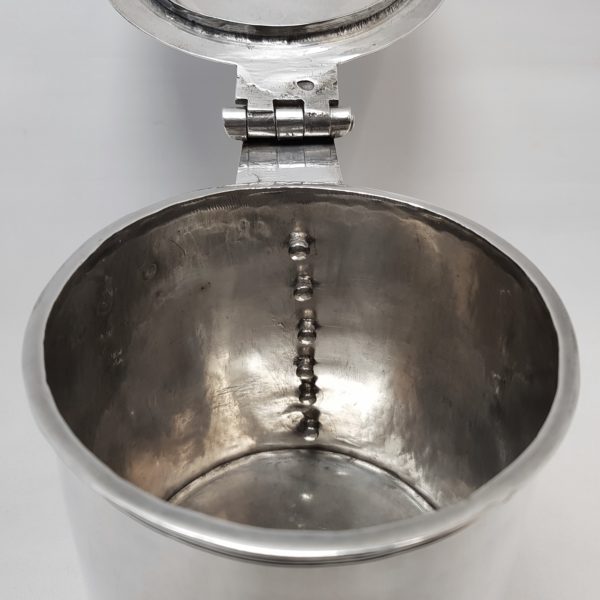 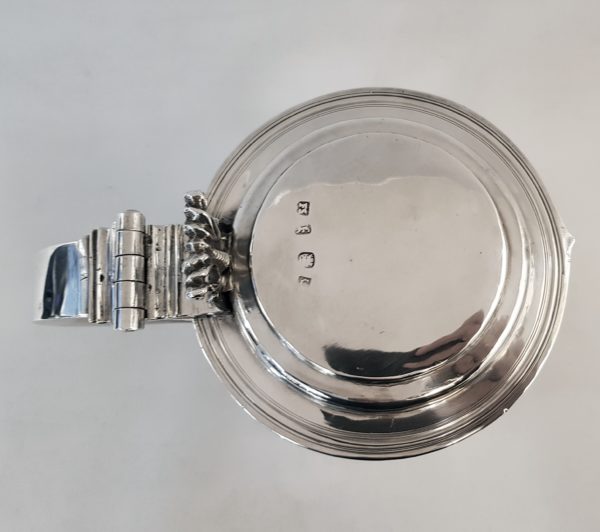 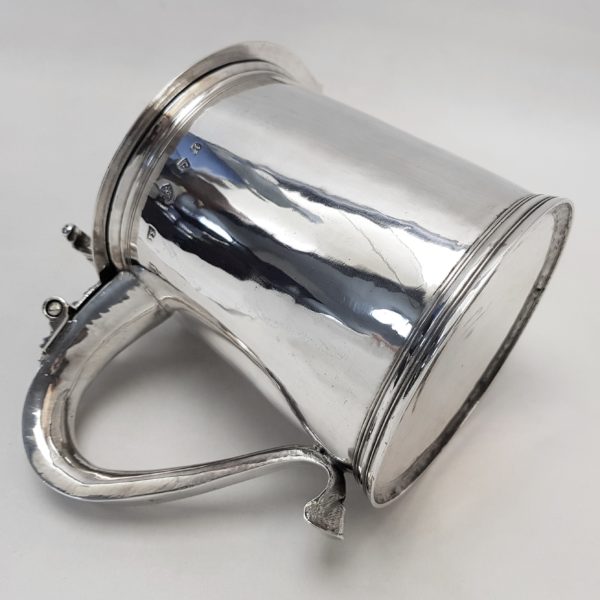 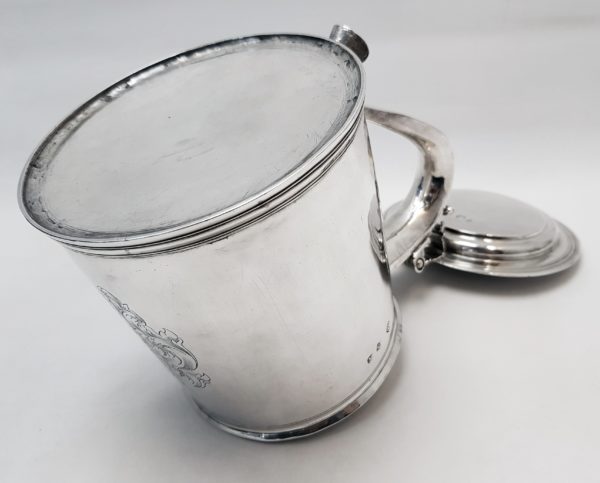 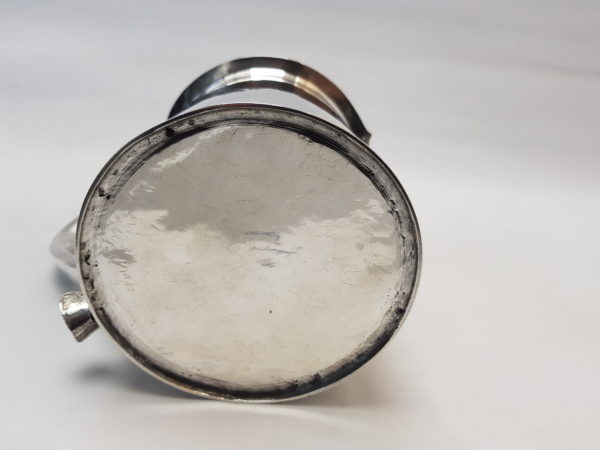 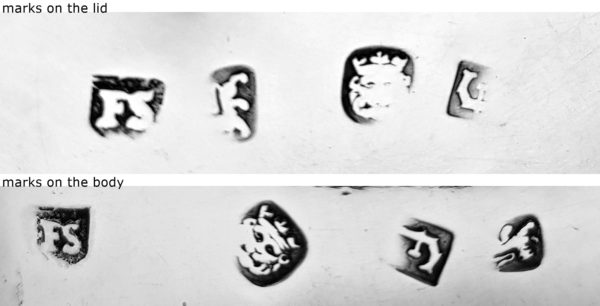 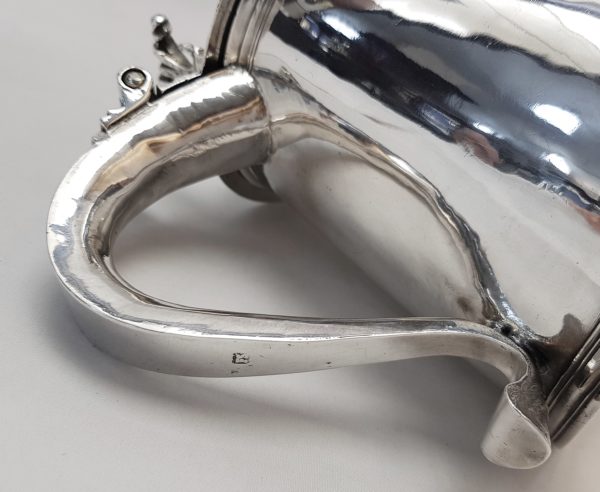 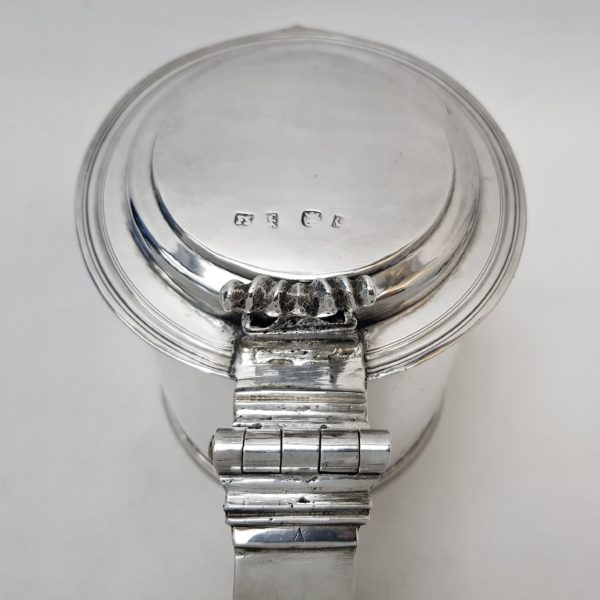 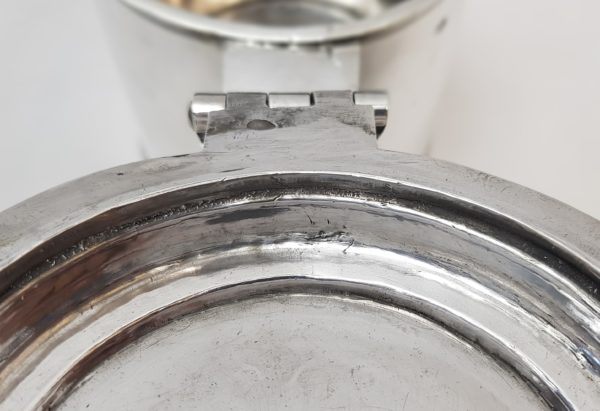 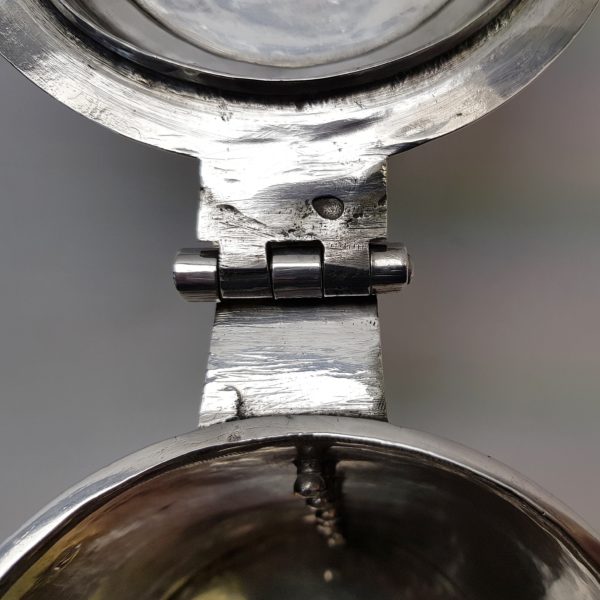 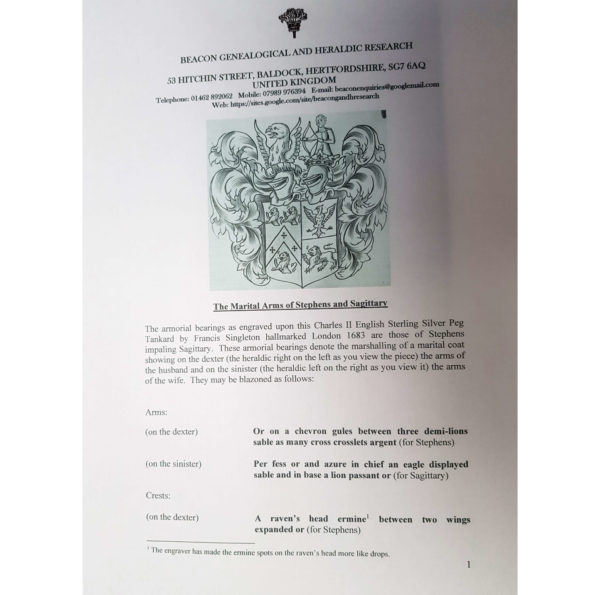 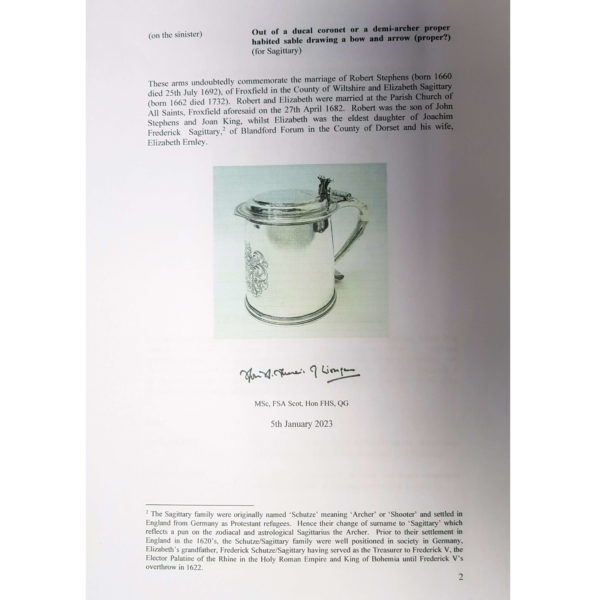 Extremely rare. An unusual early English silver peg tankard, flat lidded, with a vertical row of six pegs inside. Good patina. Lovely plain design and beaten silver. To the front there is a contemporary family armorial within a large cartouche.

Marks. Stamped on the body and lid with a full set of matching English silver hallmarks; the handle has the maker’s mark.

Arms. The arms commemorate the marriage of Robert Stephens (born 1660 died 25th July 1692), of Froxfield in the County of Wiltshire and Elizabeth Sagittary (born 1662 died 1732). Robert and Elizabeth were married at the Parish Church of All Saints, Froxfield aforesaid on the 27th April 1682. The Sagittary family were originally named ‘Schutze’ meaning ‘Archer’ or ‘Shooter’ and settled in England from Germany as Protestant refugees in the 1620’s. The Schutze/Sagittary family had been well positioned in society in Germany, Elizabeth’s grandfather, Frederick Schutze/Sagittary having served as the Treasurer to Frederick V, the Elector Palatine of the Rhine in the Holy Roman Empire and King of Bohemia until Frederick V’s overthrow in 1622.

Literature: The name ‘peg tankard’ is derived from the vertical row of cylindrical pegs soldered inside the tankard, used to measure the amount of alcohol drunk as the tankard was passed around the table. Each drinker could drink his allocated peg measure. The term ‘peg’ probably derives from the Danish measure ‘paegl’, roughly equivalent to a pint.

Peg tankards have a long history in the Scandinavian and Baltic countries. In England peg tankards were made from the mid-1650s through to the 1680s, mainly in York, Hull and other north-eastern towns with close cultural links with northern Europe. They usually follow the Scandinavian form, incorporating floral engraving and pomegranate feet. There is a plain example similar to this in the Metropolitan Museum of Art ref: http://www.metmuseum.org/collection/the-collection-online/search/195229

This lovely 17th century tankard is in very good condition with a good antique colour with moderate signs of wear commensurate with age. There is a small dent on the top of the handle where the thumbpiece has been touching the handle for over 400 years. There has been an earlier repair which you can see behind the thumbpiece. The pegs are slightly out of line.