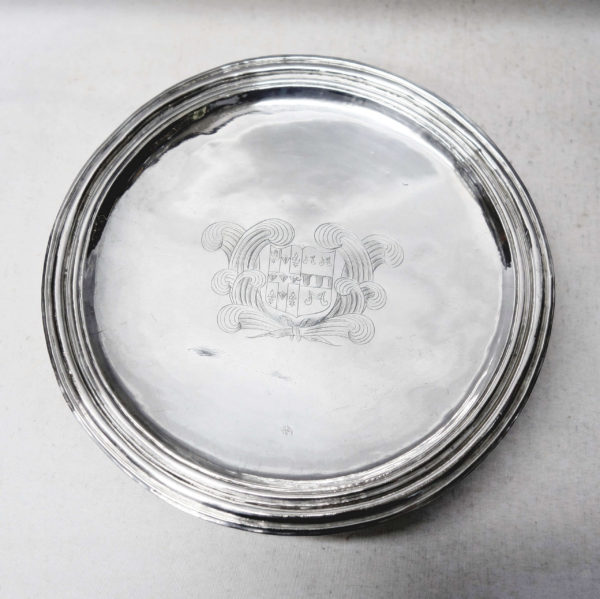 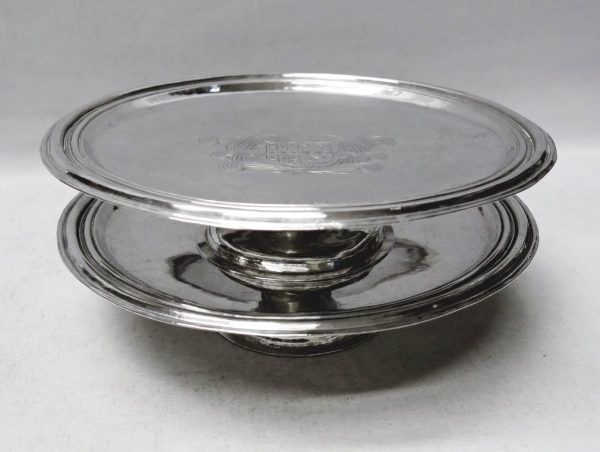 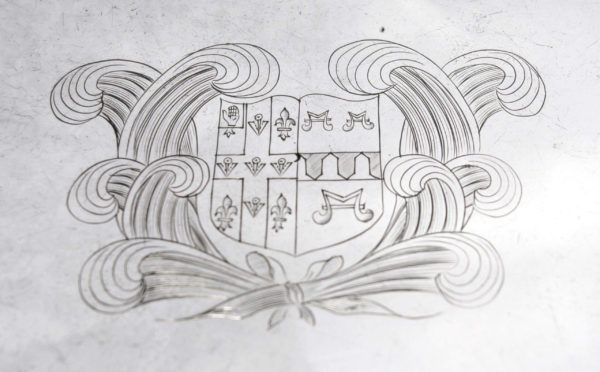 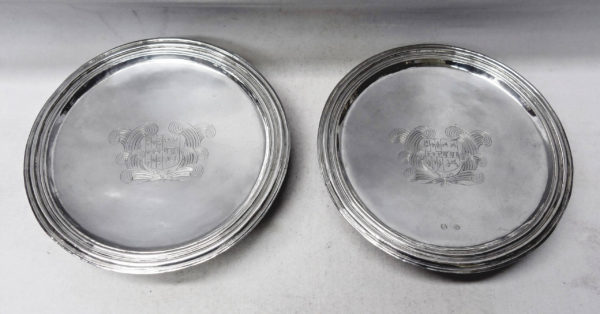 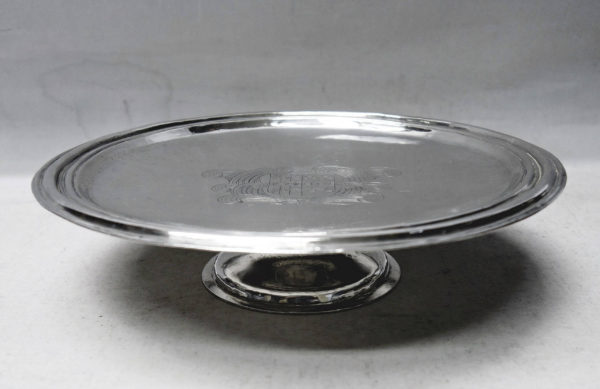 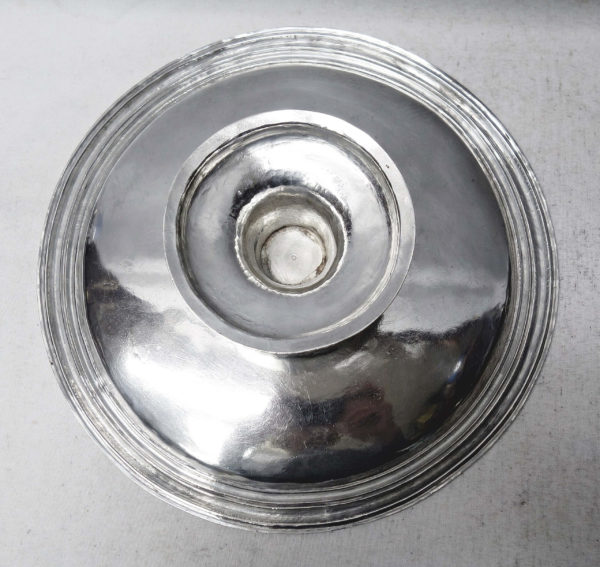 A fine pair of early English silver footed salvers with a thick reeded border. Hand engraved to the centre of...

A fine pair of early English silver footed salvers with a thick reeded border. Hand engraved to the centre of each is an armorial engraved within plumage feathers (the marital arms of Banks and Dethick*). You can still see the hand hammered finish on the feet.

Makers mark only stamped to the top of each for Ralph Leake (Jacksons page 137).

Literature: From the 17th century until the reign of George I salvers (often called tazzas) were raised on a pedestal foot. By 1700 some were made with the foot unscrewing. Very occasionally this type will also have 3 or 4 feet so that the salver can be used on a lower level

Signed/Inscribed: *The arms are those of Banks impaling Dethick for Sir John Banks 1627-1699 1st Baronet, MP and Governor of the East India Company and his wife Elizabeth the daughter of Sir John Dethick Lord Mayor of London in 1656. These armorial bearings commemorate the marriage (28th November 1654 at the Parish Church of St Andrew Undercroft in the City of London) of John Banks (b.1627 d.1699) and Elizabeth Dethick (d.1696). John was the eldest son of a minor Kentish gentry family, Caleb Banks and Martha Dann; whilst Elizabeth was the daughter of Sir John Dethick (Lord Mayor of London for the year 1656-57), of Tottenham in the County of Middlesex. Following his education at Emmanuel College, Cambridge, John made his way in the City of London as a merchant investing in the overseas trade with the East and with Africa. During 1677 he became was financially involved in an expedition to search for a North-East trade route. He was Governor of the East India Company between the years 1673-7. John also served as a Member of Parliament for several Kent constituencies: Maidstone 1654-1659, Winchelsea 1678, Rochester 1679-1690, Queenborough 1690-1695 and again Maidstone 1695-1698. He was created a Baronet (of Aylesford, Co. Kent) in the Baronetage of England by King Charles II on the 25th July 1661. He was also elected as a Fellow of The Royal Society in 1668. His only son Caleb followed him into Parliament again representing several Kent constituencies during his short parliamentary career. Sadly, Caleb died aged 36 in 1696. Although married he left no issue, so on his father’s, Sir John’s death, the baronetcy fell into extinction for want of a male heir. Sir John was survived by his two married daughters, one of whom, Elizabeth (the youngest) married Heneage Finch who in due course was created Baron Guernsey in 1703 and later advanced as the Earl of Aylesford in 1714

These rare silver tazzas are in very good condition. The engraving is still sharp. Stamped with the makers mark only. Please note that this item is not new and will show moderate signs of wear commensurate with age. Reflections in the photograph may detract from the true representation of this item.

Ralph Leake (or Leeke), London silversmith. Little is known about this fine 17th century silversmith however at some point he was working for the King’s goldsmith Sir Robert goldsmith and he also worked with Sir Christopher Wren. Leake left a legacy of fine silverwares, many of which are on show in museums and galleries worldwide such as: 1. silver gilt chalice and paten dated 1683-1684 in the V & A collection. 2. The Royal Hospital Chelsea has a collection of magnificent silver-gilt altar plate hall-marked 1687-8 by Ralph Leake. 3. French fountain in the Getty Museum 4. Two wine cisterns – one in the V & A, the other belonging to the Goldsmith’s Company 5. The Marquess of Winchester’s Cup, one of the outstanding pieces of the Winchester College Collection.