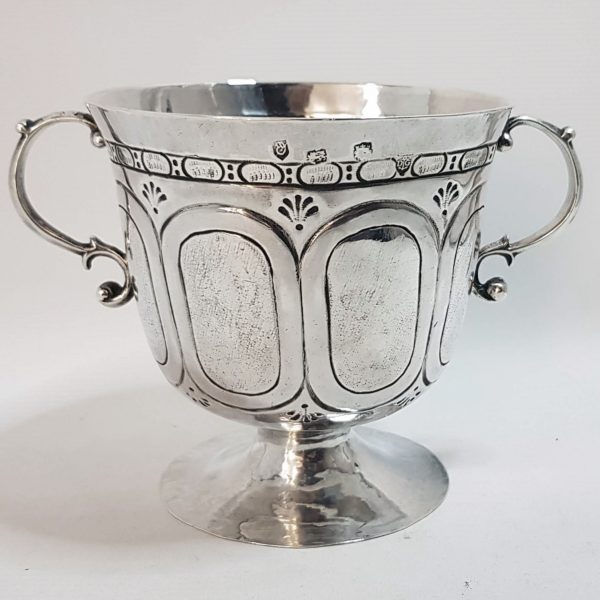 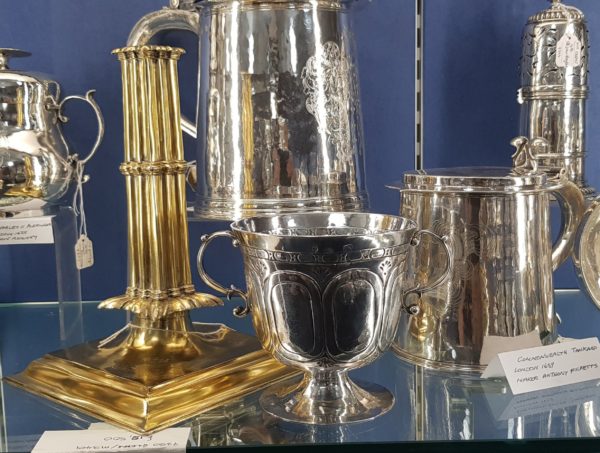 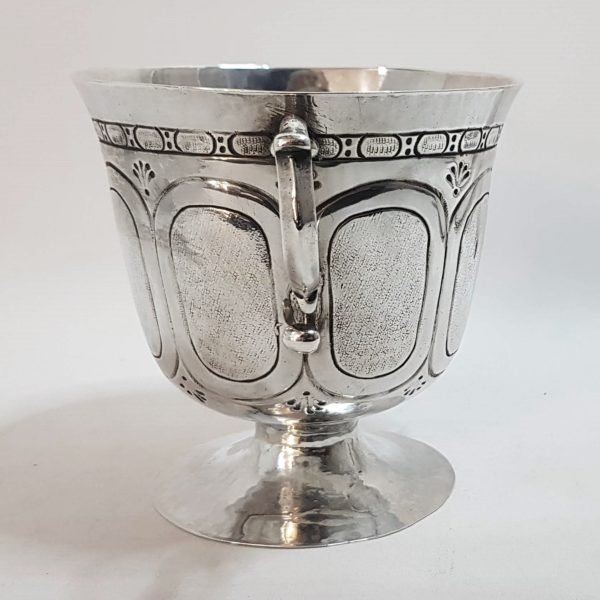 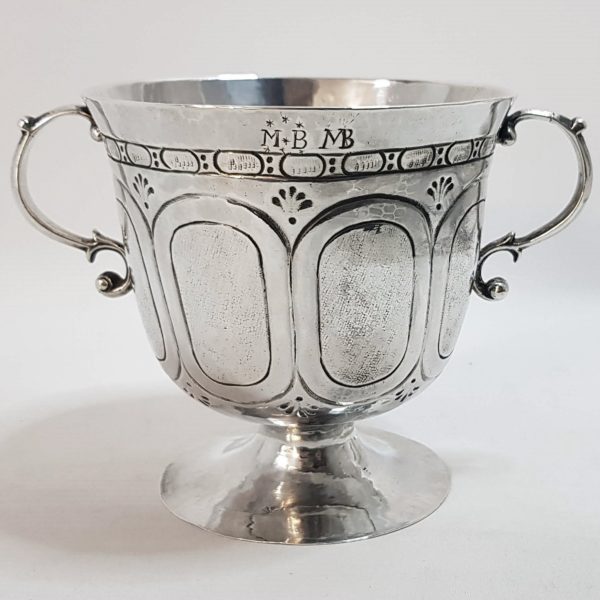 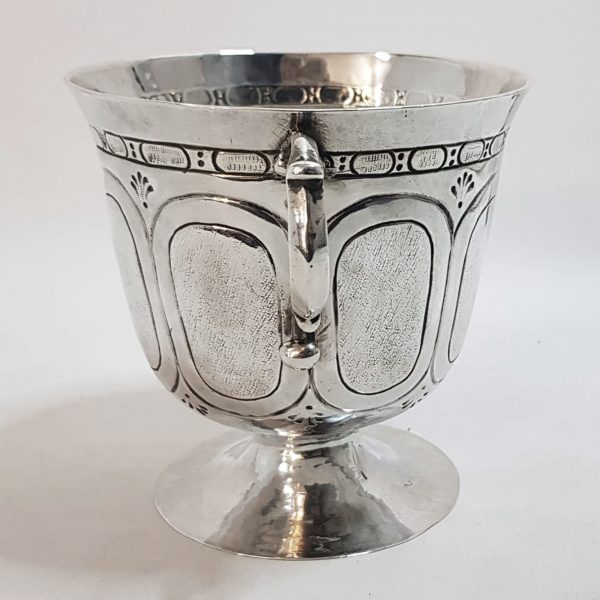 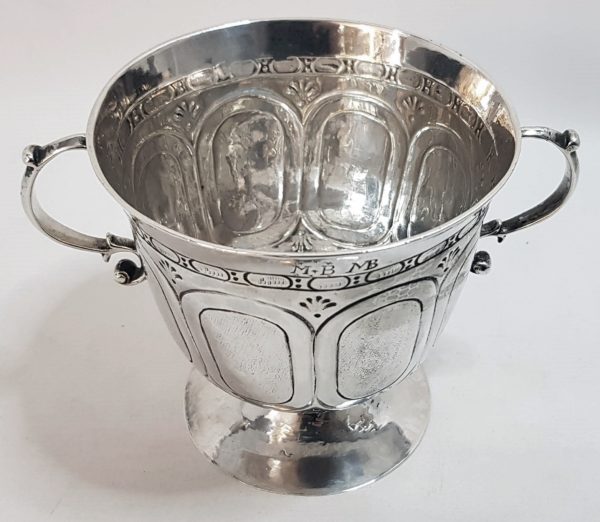 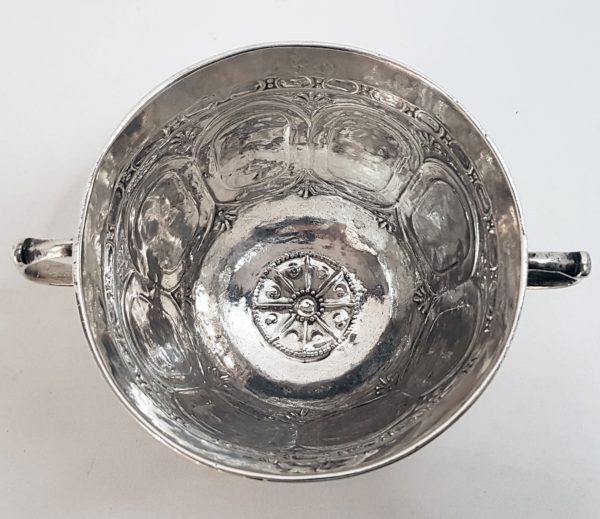 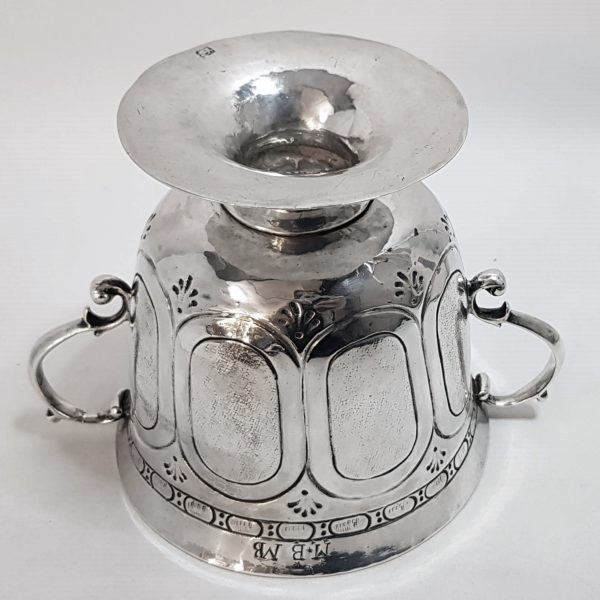 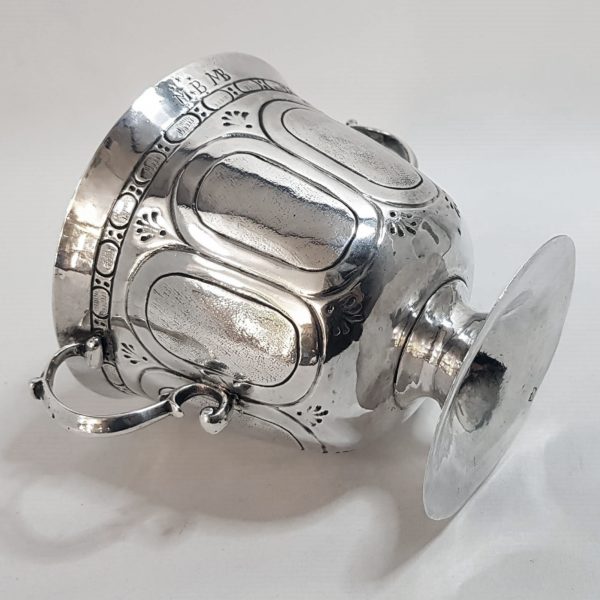 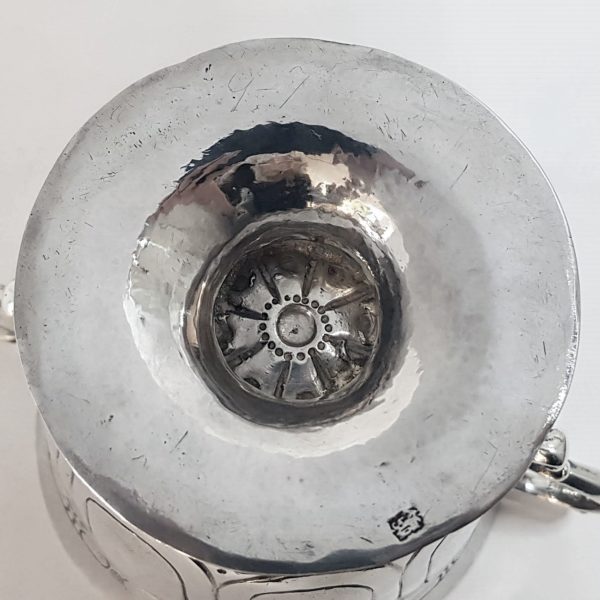 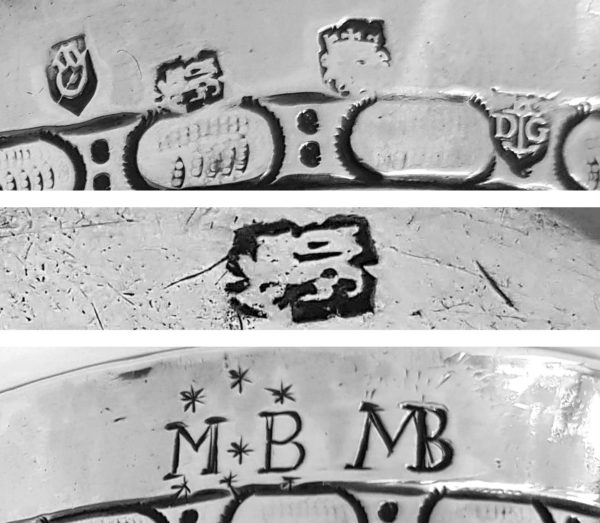 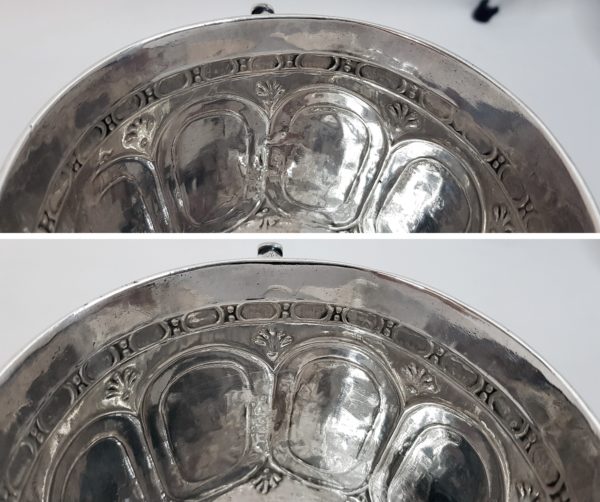 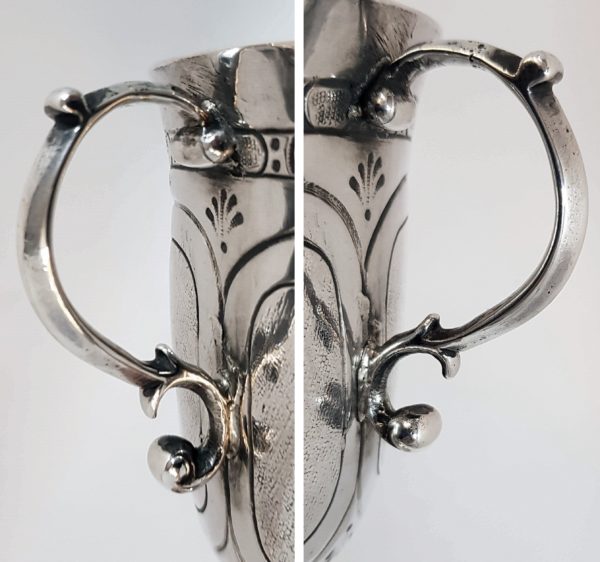 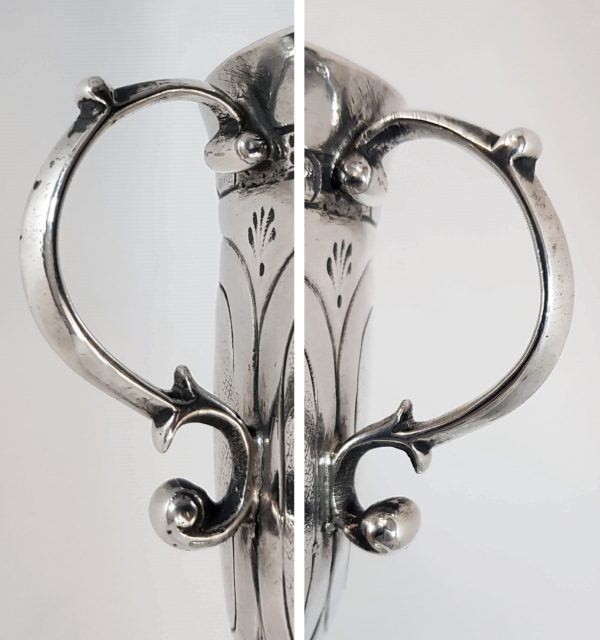 An important piece of early English antique silver dating back to 1649, the year of King Charles I's execution. This...

An important piece of early English antique silver dating back to 1649, the year of King Charles I’s execution. This twin handled silver cup, with shaped side handles and spreading circular foot, is possibly a very early example of a porringer, or caudle cup. The body has a hand chased band of decoration at the top with matted roundels and punched motifs below; this more sombre decoration is associated particularly with the Commonwealth period. Superb colour. An attractive feature is the beaded and segmented decoration to the base, very reminiscent of wine tasters of this period. Hand engraved to the front are the initials “MB” surrounded by stars.

Marks. Stamped around the top edge with a full set of English silver hallmarks. The base has the lion mark.

Porringers are two handled bowls and some have a cover. They can also be known as caudle cups although the origin of the porringer was for porridge and the caudle cup was for a type of broth. From the eighteenth century onwards, porringers and cups and covers were used mainly as centrepieces or ornaments. In recent times they have seen a resurgence in popularity for drinking and on the dining table. They make a very attractive baby gift.

Literature: The Commonwealth was the Puritan period from 1649 to 1660 when England and Wales, later along with Ireland and Scotland, were ruled as a republic following the end of the Second English Civil War and the trial and execution of Charles I. The monarchy was restored in 1660 with the coronation of Charles II. Silver from this period is very rare.

* There are no precise records of silver makers marks prior to 1681 as all records were destroyed in the fire at Goldsmiths Hall in that year when the Assay Office and apartments of the Assayer and Clerk in the south west wing of the building were burned down. Sometimes the details of makers can be discovered from old records such as the inventories of noble houses and other institutions. The first surviving record at Goldsmiths Hall is the 1682 copper plate made to start the recording process again. A recent study by Dr David Mitchell, supported by Goldsmiths Hall, has resulted in the publication of his 2017 “Silversmiths in Elizabethan and Stuart London”. This reference work identifies previously unknown makers marks and assigns marks struck on existing plate to individuals (attributions for 540 separate marks).

The silver cup is in good condition and the antique colour is excellent. There are signs of old solder repairs where the handles join the body and the foot is slightly uneven in shape. This is a very fine example of early English silver and the condition is consistent with its age. Please note that this has been vetted and approved by The Antique Plate Committee at Goldsmiths Hall.

Daniel Gee, son of the London goldsmith Richard Gee. Daniel was apprenticed to Giles Allen in 1594, free 1608. Almsman in 1633 on the death of his father. Died 1658. Daniel bound 5 apprentices, including Henry Starkey who also became a leading London silversmith. Daniel’s brother Abraham was made free of the Company by patrimony in 1632 when he was recorded as Daniel Joye (alias Gee).