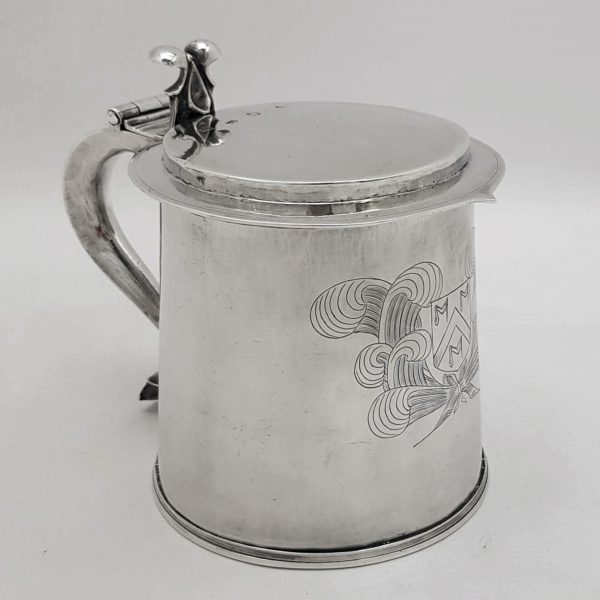 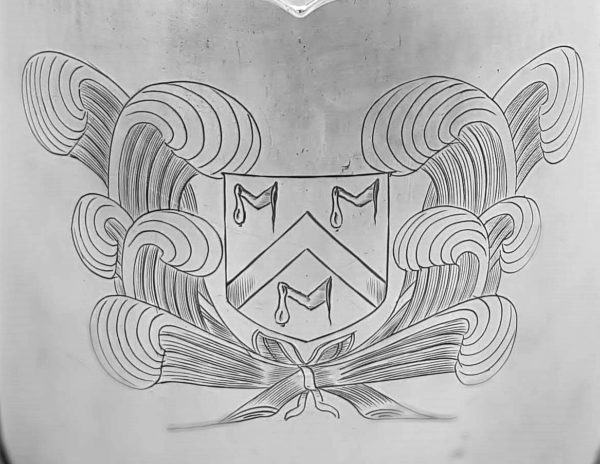 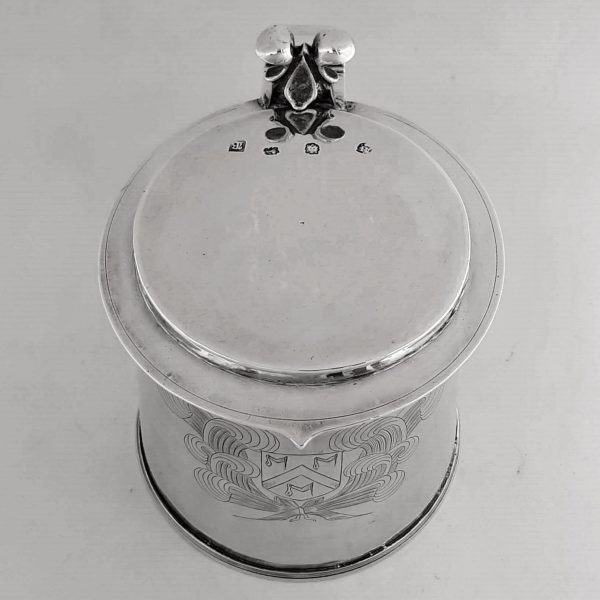 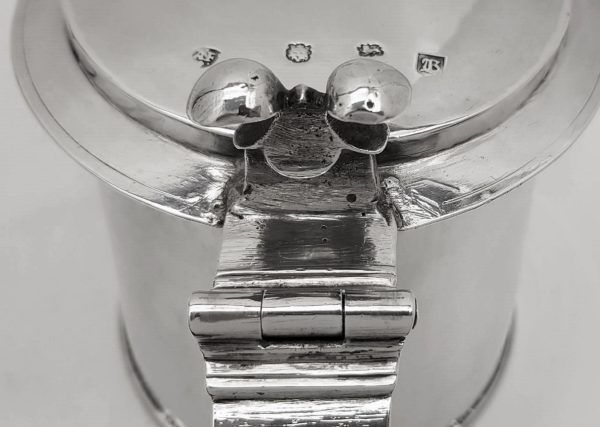 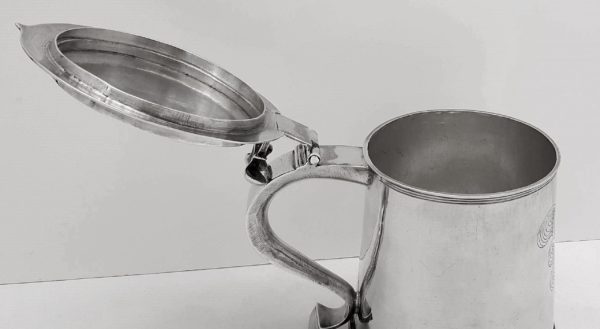 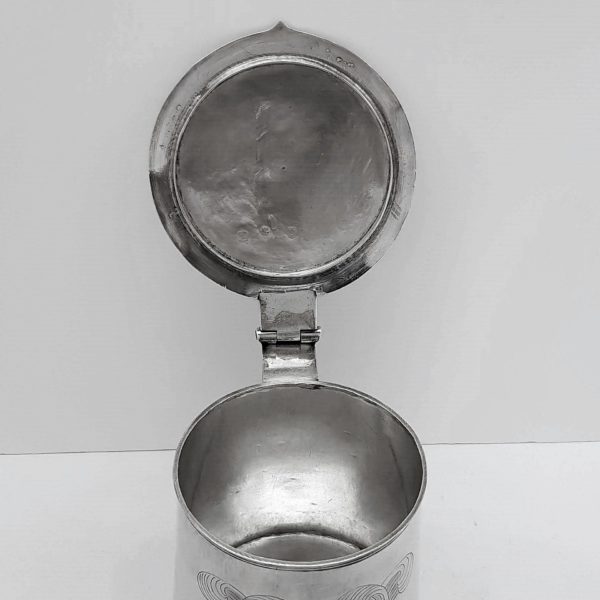 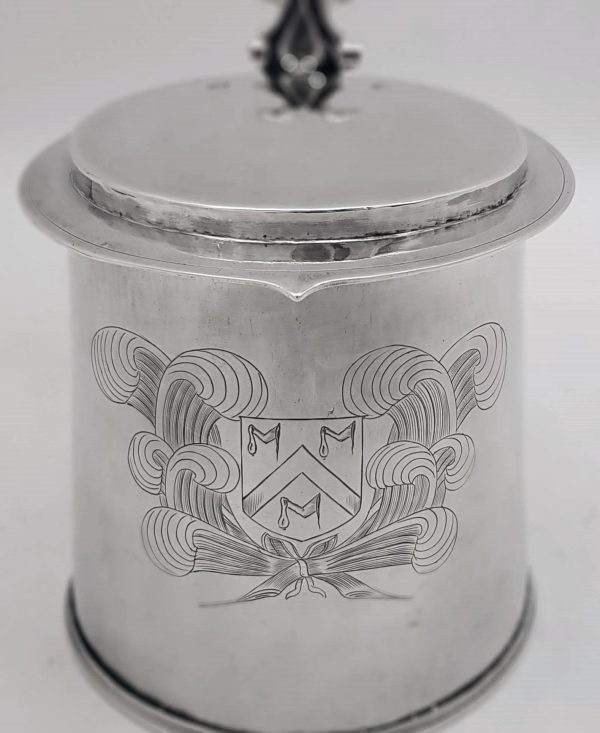 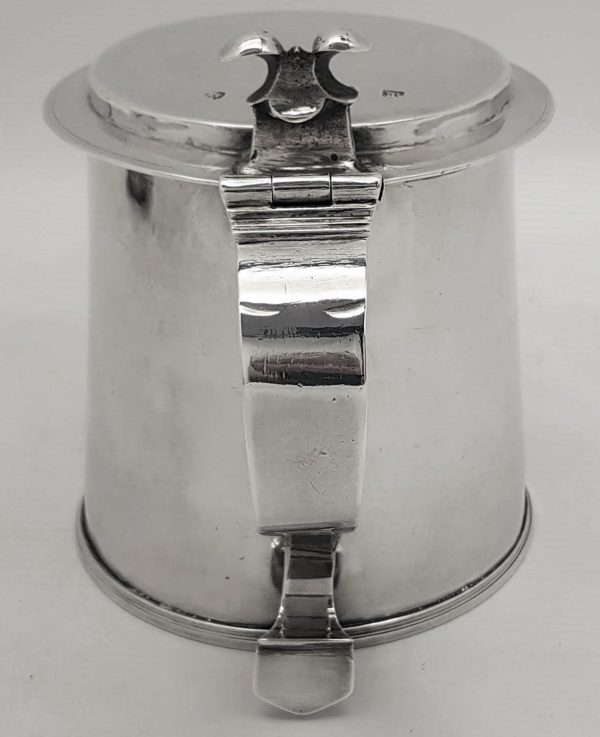 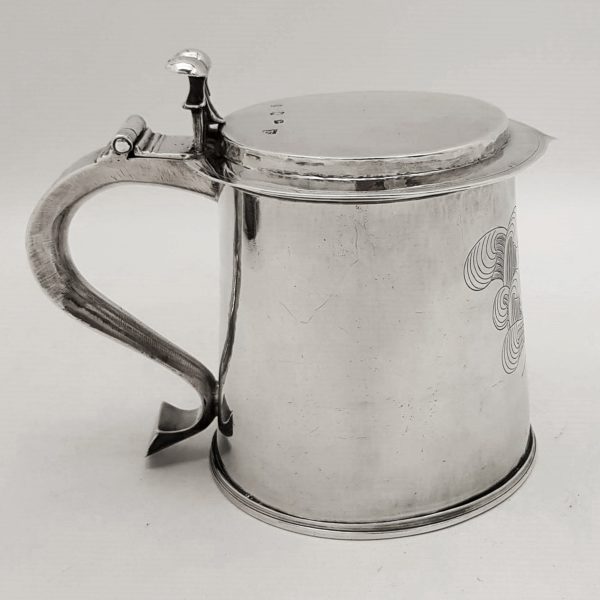 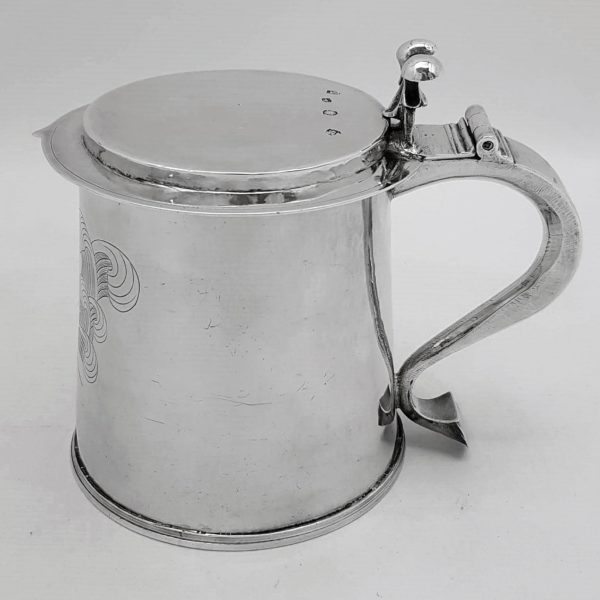 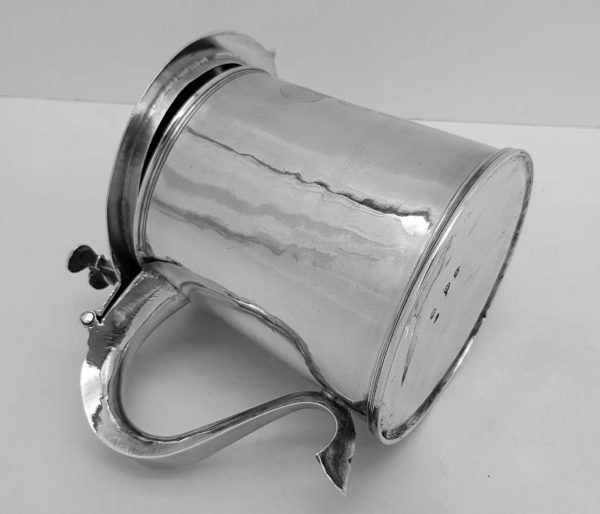 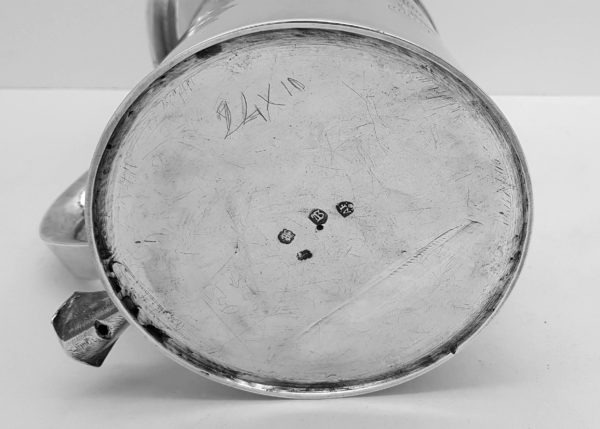 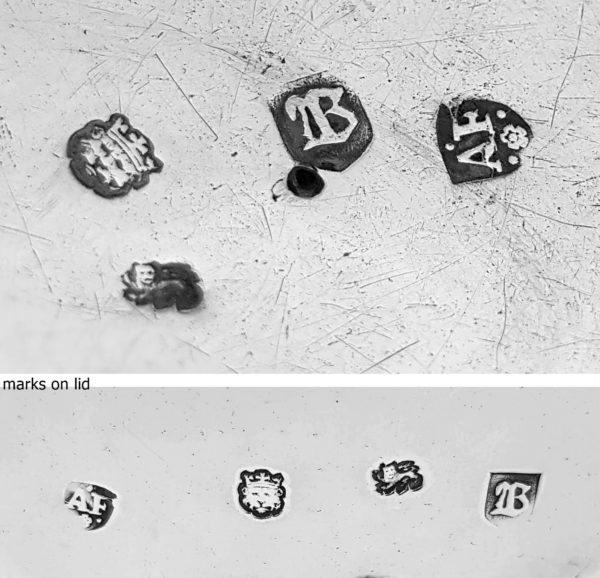 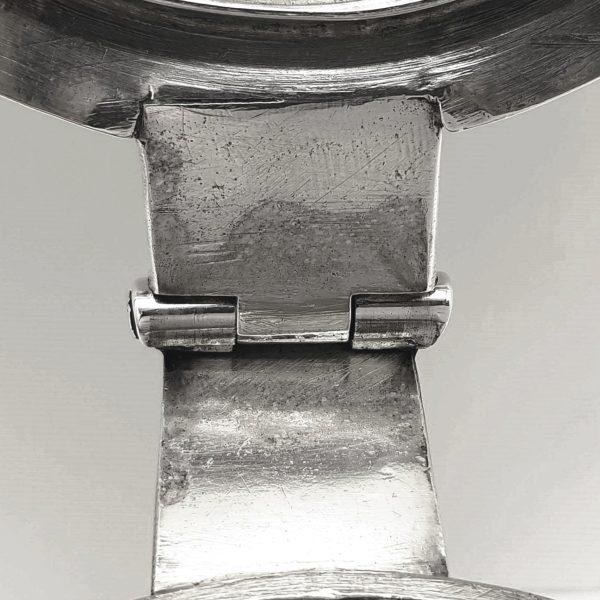 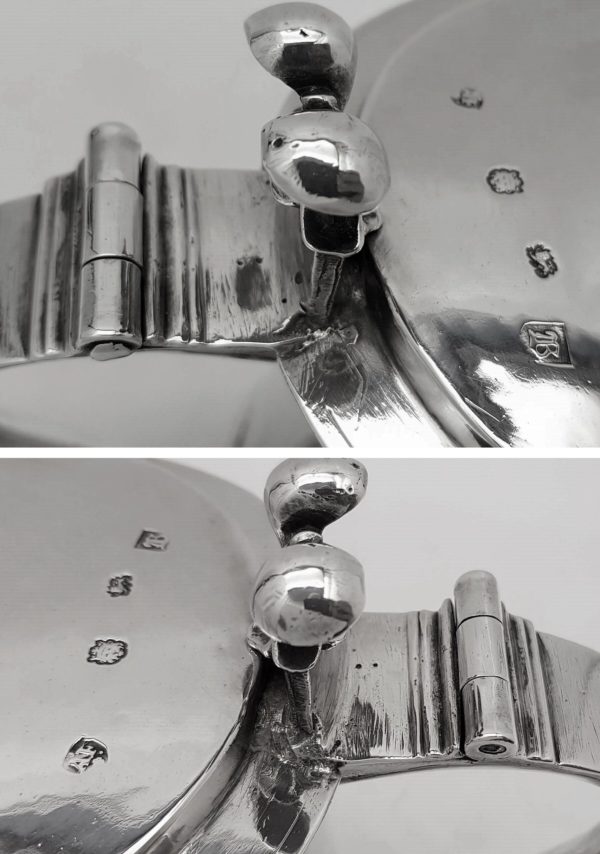 A rare early English silver flat top lidded tankard with a cast, kidney shaped thumbpiece. The S-scroll handle has a...

A rare early English silver flat top lidded tankard with a cast, kidney shaped thumbpiece. The S-scroll handle has a shield terminal. Circa 1640 is the earliest date at which this tankard shape occurs and it’s unusual to find a tankard from this turbulent period and early date. Very charming, with hand beaten silver, the tankard displays a lot of character; a nice feature is the pointed front of the lid. Hand engraved to the front with a flat topped shield within ostrich plume feathers, a popular style of engraving from 1660-1690.

London 1659. Silver from this period is very rare.

Literature: The Commonwealth was the period from 1649 to 1660 when England and Wales, later along with Ireland and Scotland, were ruled as a republic following the end of the Second English Civil War and the trial and execution of Charles I. During this period Oliver Cromwell, an English general and intensely religious man, ruled the British Isles as Lord Protector until his death in 1658 when his son, Richard Cromwell, inherited the title. Richard’s weakness led to a power vacuum resulting in a coup and Parliament arranged the return to London of Prince Charles as King Charles II in 1660.
Charles returned from exile on 23 May 1660 and entered London on 29 May 1660, his 30th birthday. He was crowned at Westminster Abbey on 23 April 1661.

Marks. Fully marked on lid and base, handle unmarked. The date mark “B” for 1659/60 was used solely on Commonwealth silver. The letter mark was first introduced in London in 1477 and was changed every year on the day that the Goldsmith’s Guild wardens were elected, originally St Dunstan’s Day (19th May). However, after the Restoration of the Monarchy in 1660 the date letter change day was moved to 29th May. Thus, all silver assayed during the first year of Charles II was stamped with the date letter “C”.

Arms. The blazon: argent, chevron gules between three maunches azure. Likely to be for Stafferton (Stawton) of Berkshire.

Very good condition. Stamped on the lid and body with a full set of clear English silver hallmarks. Excellent patina. A nice feature is the small dent on top of the handle where the thumb piece has been touching for over 360 years. There are signs of an old repair to the lid. The hinge has some play.

Anthony Ficketts, London silversmith, apprenticed to James Pigborne for 8 years in 1627, turned over to Thomas Cooke on Pigborne’s death in 1631, free 1637. Ficketts appears to have lived quite a chequered life, according to Mitchell’s biography, and was involved in many heated disputes with both clients and the Goldsmith’s Company. Despite this, he was elected to the Livery in 1653, Renter Warden 1664, Assistant 1667 and 1683. Died 1686. Ficketts led a successful and prosperous career, he took on 9 apprentices and was assessed in the Hearth Tax of 1666 as “a silversmith in Foster Lane with 6 hearths” whereas most silversmiths occupied much smaller houses, usually with just 3 or 4 hearths.