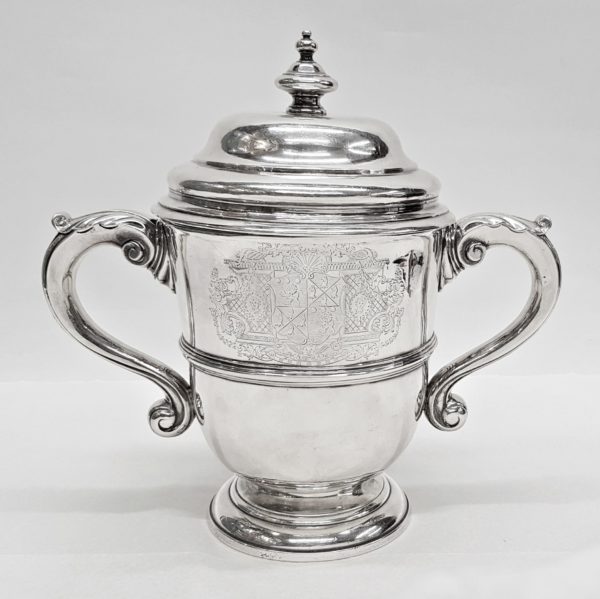 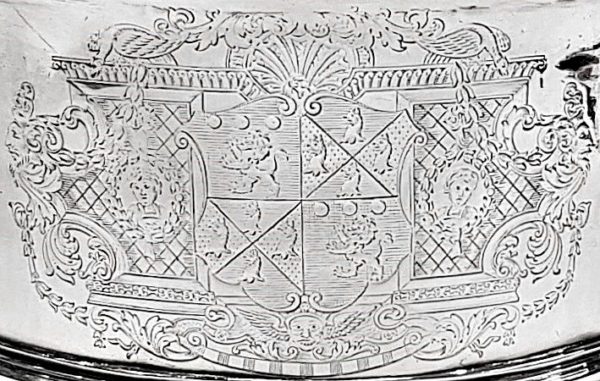 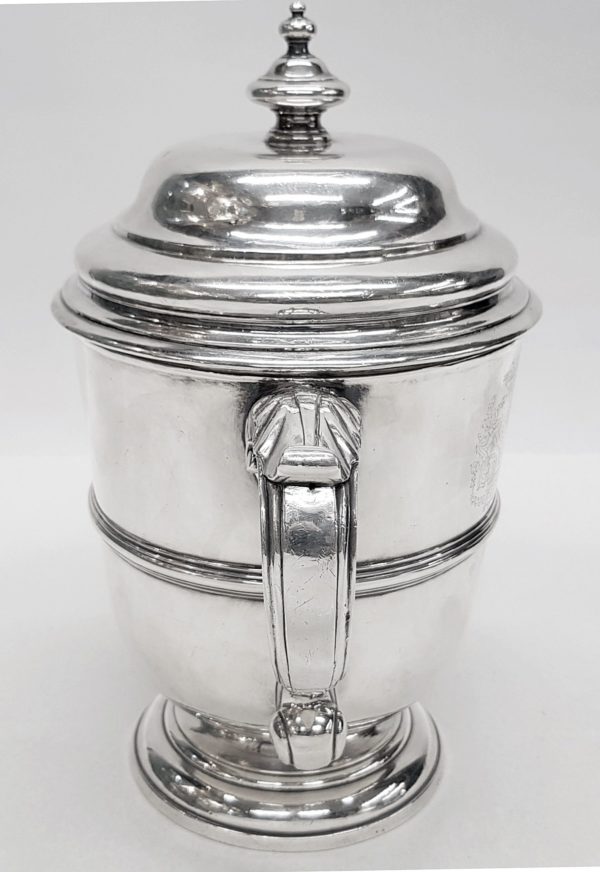 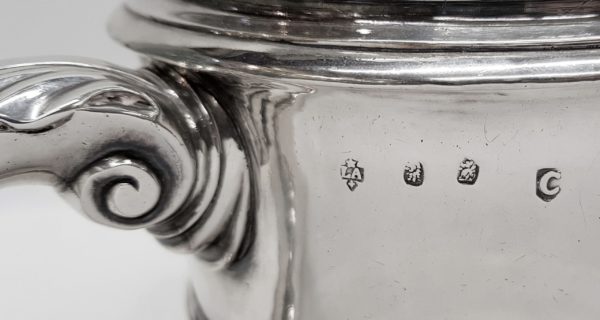 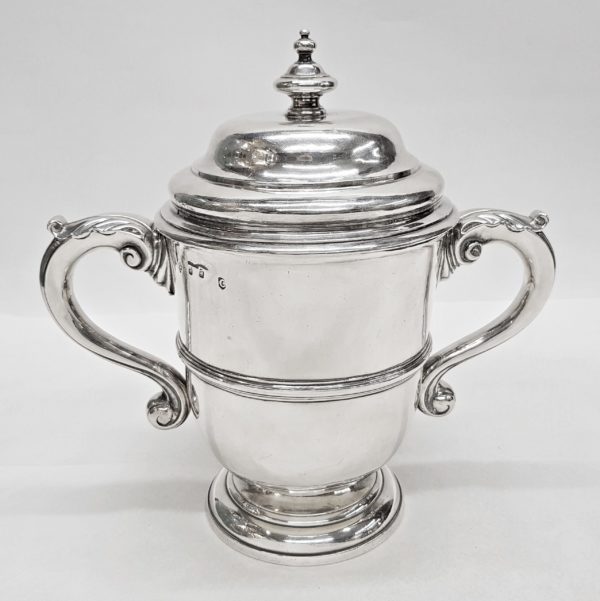 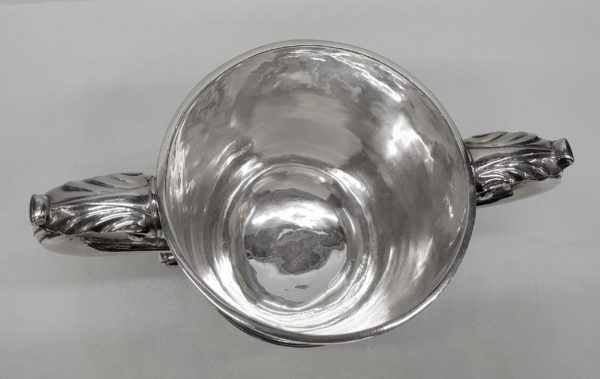 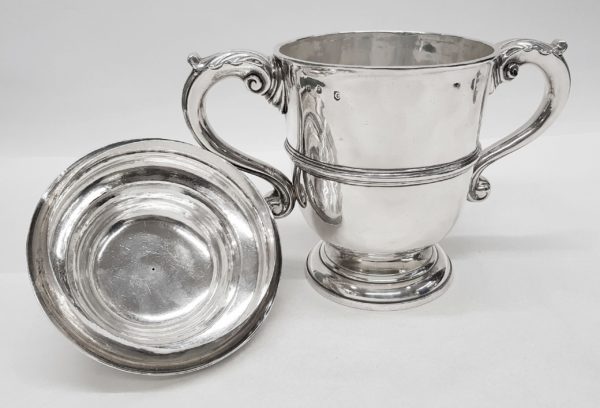 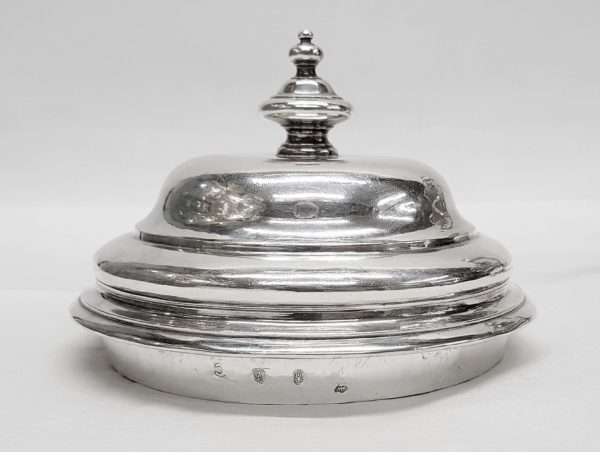 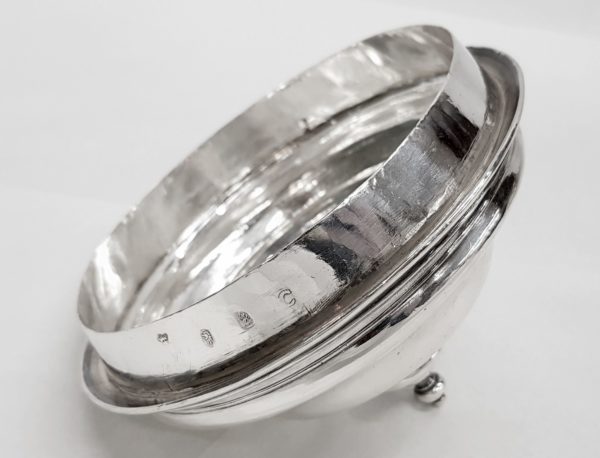 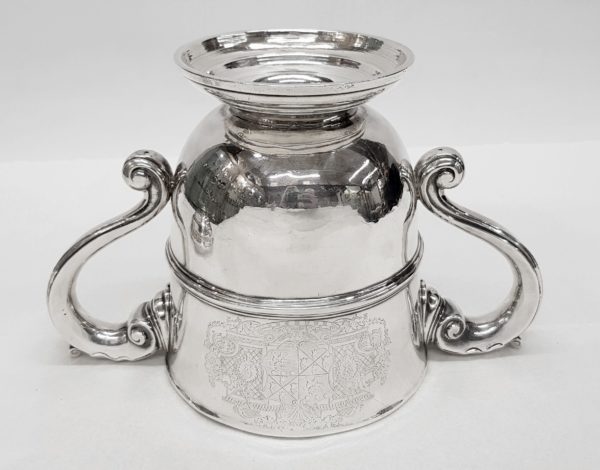 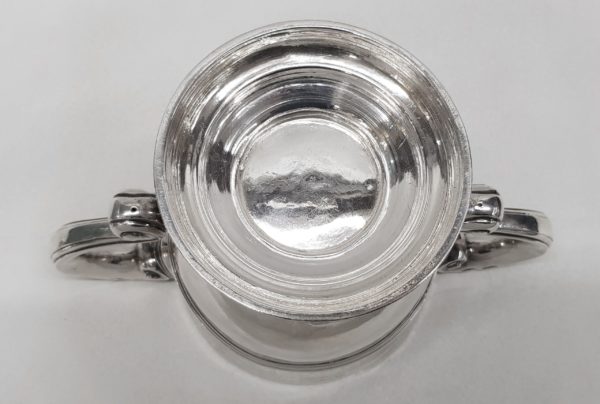 An outstanding early antique silver cup and cover with acanthus leaf topped side handles. By the sought after Huguenot silversmith...

Literature: There is a similar cup and cover in the exhibition catalogue, Goldsmiths’ Hall, “Paul De Lamerie at the sign of the Golden ball, an exhibition of England’s master silversmiths (1688 – 1751)”, May – June 1990, page 50. Lent by Her Majesty the Queen. There is another Lamerie cup bearing the Treby arms in the British Museum see link – https://artsandculture.google.com/asset/silver-gilt-cup-and-cover-and-a-sideboard-dish-by-paul-de-lamerie/rgGrGsL-Dh72sw
George Treby (II) (c. 1684 – 1742), was the son of Sir George Treby, an eminent Whig lawyer, politician and Speaker of the House of commons (1689 – 92). Educated at Exeter College, Oxford, he followed his father’s footsteps into law, and as M.P. for Plympton Erle. George Treby (II) held other prominent positions in government, before he was turned out of office by Walpole’s fall in February 1742, dying 8th March 1742. As one of the leading 18th century silversmiths, Paul De Lamerie was gathering important clients; Treby, the Earls of Warrington and many others. George Treby’s early purchases from De Lamerie are fairly modest in their form, however, as Treby grew in status through his political career so did his confidence in his orders from De Lamerie, culminating in the toilet service for his wife, Charity Hele.

This marvellous silver cup is in very good condition with no damage or restoration. Superb patina. Crisp engraving. Stamped with a full set of English silver hallmarks to the body and the rim of the cover; the Lamerie makers mark with a crown on the cover, the Lamerie makers mark without the crown on the body. This cup and cover has been fully authenticated. Please note that this item is not new and will show moderate signs of wear commensurate with age. Reflections in the photograph may detract from the true representation of this item.