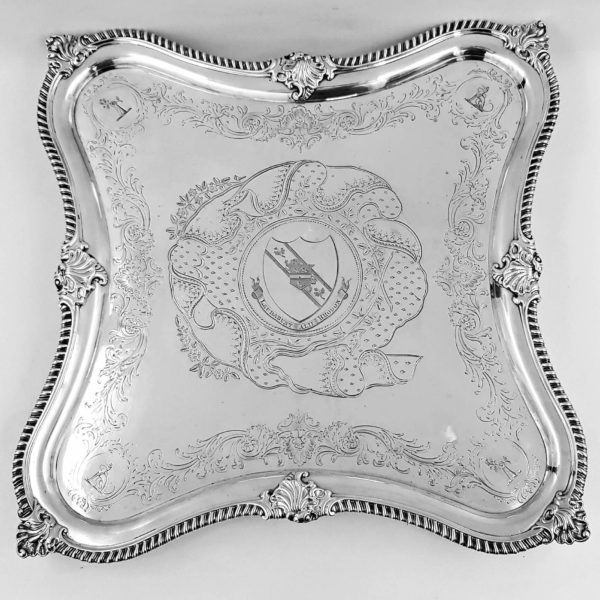 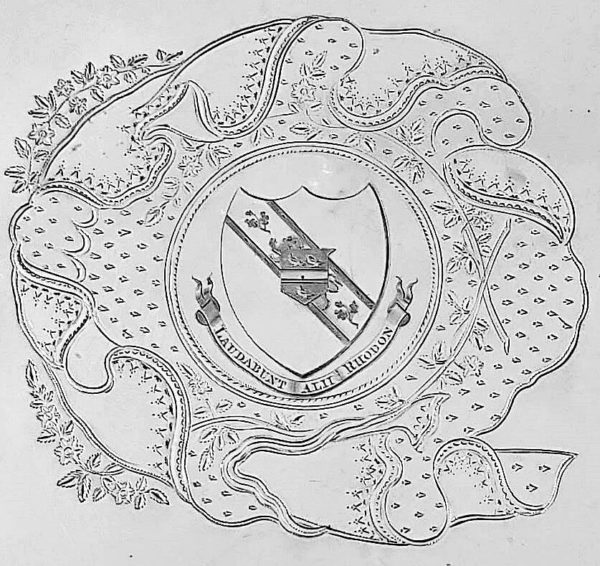 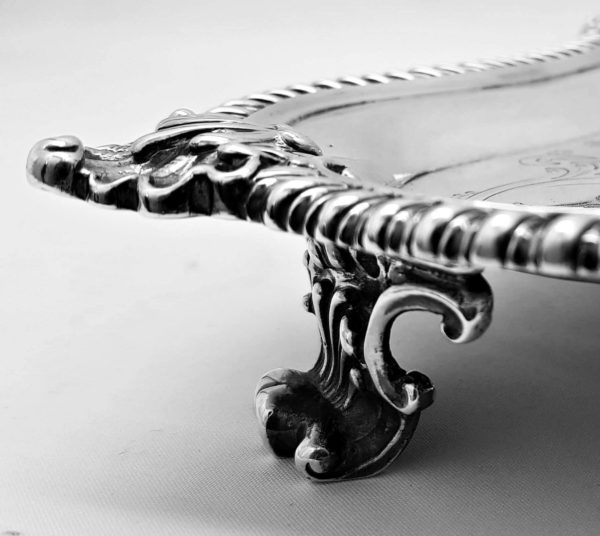 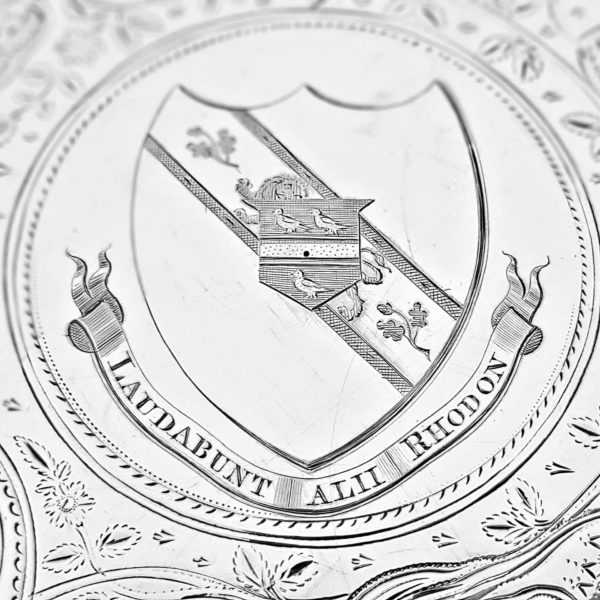 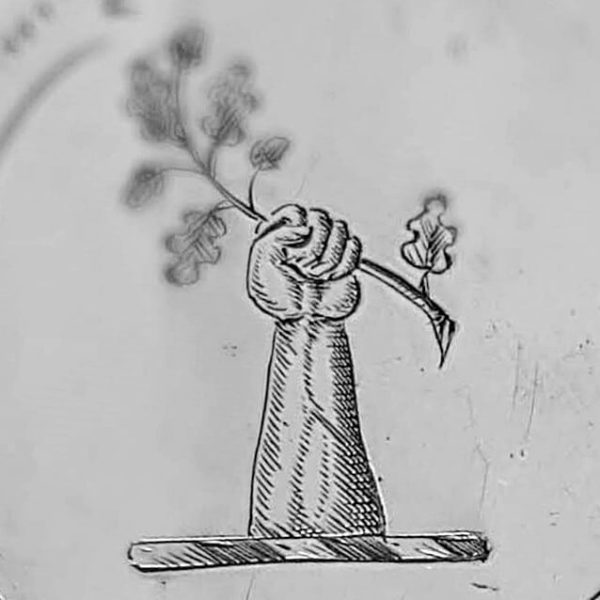 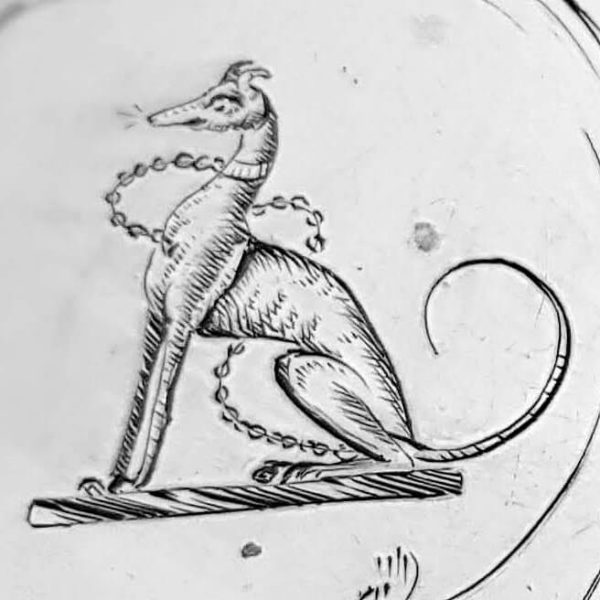 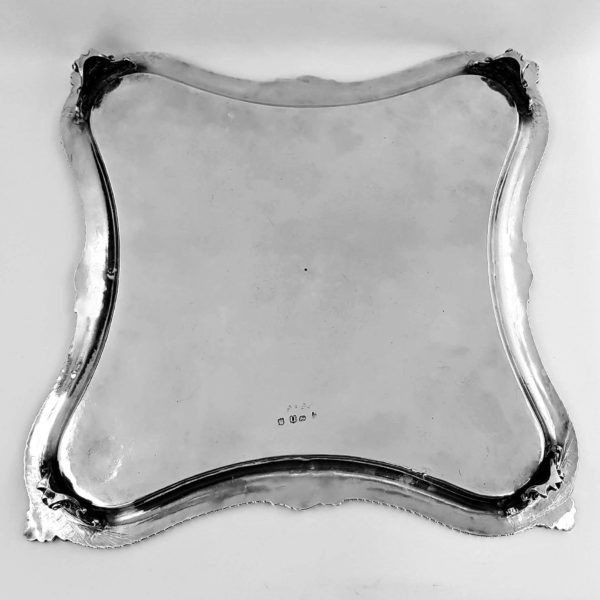 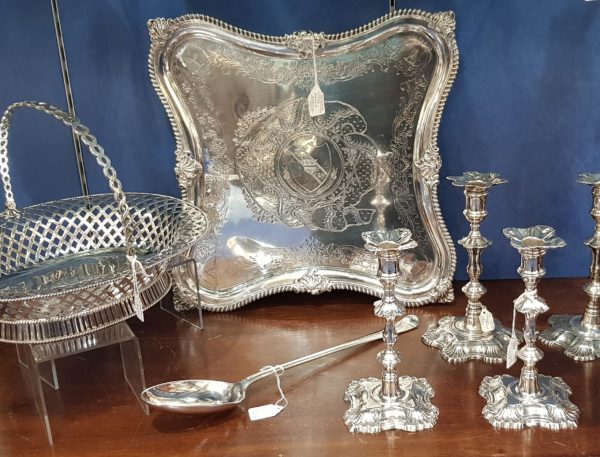 Large size and very impressive. A rare antique silver salver, of unusual square waisted form with gadroon borders and shell corners. Heavy gauge silver. The outside centre has a traditional shell and foliate engraved theme with shells and a crest to each corner. Engraved to the centre is a marriage coat of arms for Rhodes with Smith with an “escutcheon of pretence”, and the motto “Laudabunt Alii Rhodon” circa 1790. The engraved mantling, of an unfurling ruffle of cloth, is very striking and contemporary to the arms.

Marks. Stamped underneath with a full set of clear English silver hallmarks

Arms. The arms are for Rhodes with Smith on an escutcheon of pretence for William Rhodes Esq of Bramhope Hall (1791-1869) who married Ann Smith (1791-1827) on 18th August 1817 at Otley, All Saints, Yorkshire.
He the second son of Peter Rhodes (1759-1837) and Elizabeth Armitage (1763-1825) the daughter of James Armitage Esq (1730-1803), a wealthy wool merchant of Leeds whom in 1799 acquired Farnley Hall, Leeds for the price of £49,500. Ann the only child and heir of Christopher Smith of Leeds whom in 1797 bought Bramhope Hall and 110 acres from the Dyneley family for £7500.
William educated at Woolwich was a magistrate and deputy lieutenant for the West Riding of Yorkshire appointed coront 19th Light Dragoon Guards in 1810, captain in 1816 and served in Canada through the war of 1812-14 (see Walford, E., (1860) The county families of the United Kingdom, or, Royal manual of the titled and untitled aristocracy of Great Britain and Ireland, p.539). Upon the death of their daughter Francis Darwin nee Rhodes (1825-1920) the Bramhope Hall Estate was sold. These arms are found in the monument for the above in Bramhope Puritan Chapel.

For another salver of the same form marked for 1755 by the same maker, engraved with original arms in a different central cartouche, illustrated Grimwade, A., (1974), Rococo Silver 1727-1765, London: Faber and Faber Limited, fig. 18D.

Heraldic heiress. In English heraldry, an heraldic heiress is a daughter of deceased man who was entitled to a coat of arms (an armiger) and who carries forward the right to those arms for the benefit of her future male descendants. This carrying forward only applies if she has no brothers or other male relatives alive who would inherit the arms on the death of the holder.

Marriage Arms. If a heraldic heiress marries an armiger, then, rather than impaling her arms on the sinister side of his as would be usual in the marriage of a woman whose father bore arms, she instead displays her father’s arms on a small shield over the centre of his shield – an “escutcheon of pretence” – for as long as there is no blood male in her extended family. Her husband never owns her inherited arms, and they cannot pass on his death to any of his sons who are not also hers.

Literature. From the 17th century until the reign of George I salvers were raised on a pedestal foot. This form is often called a “tazza”. By 1700 some were made with the foot unscrewing. Very occasionally this type will also have 3 or 4 feet so that the salver can be used on a lower level.
The traditional form of salver with plain flat surfaces and small feet at the edge, rarely found before the reign of George I, was made in various forms such as round, rectangular, oval and octagonal and are an ideal starting off point for collectors of early silver.
The term “waiter” is not commonly used but relates to small examples less than 6 or 7 inches; these have become very popular now to stand a bottle or wine glass.

Edward Wakelin, apprenticed to John le Sage June 1730, free 1748. By 1747 he had joined the famous George Wickes at Panton Street, entered his first mark (2 sizes) which was almost indistinguishable from the mark of George Wickes, and during the period 1747-1760 Wakelin took virtual charge of the silver side of Wickes’ business. By 1752, Wickes was already making retirement plans although the formal date of the hand over to Wakelin, and his new partner, John Parker I was dated 1760. Wakelin, in partnership with John Parker I, entered a new mark circa 1758-1761 where Parker's initials appear above Wakelin's, suggesting that he became the senior partner at this point. John Parker I and Edward Wakelin retired in 1777 and the business was continued by John Wakelin, Edward's son, and William Taylor. Edward Wakelin was a man of extraordinary business acumen. He bought into an established business and possessed the ability to ensure its continued success. He employed talented, but mainly anonymous silversmiths at Panton Street, outsourcing what he was unable to make. Two of these highly skilled silversmiths were James Ansill and Stephen Gilbert, former apprentices of George Wickes, who never entered a mark while working for Parker and Wakelin, but in 1780 Stephen Gilbert entered a mark in partnership with Andrew Fogelberg that continued until 1793. It is highly probable that Sebastian and James Crespel learnt their trade under Edward Wakelin and there was a definite financial connection between the Crespels and Wakelin and Parker.