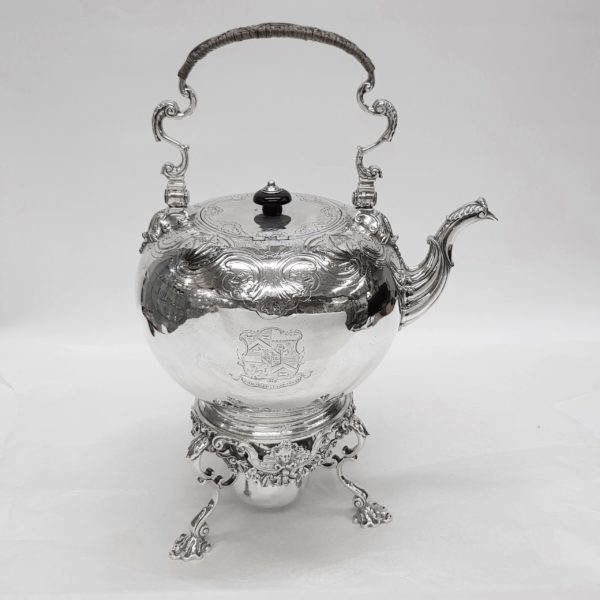 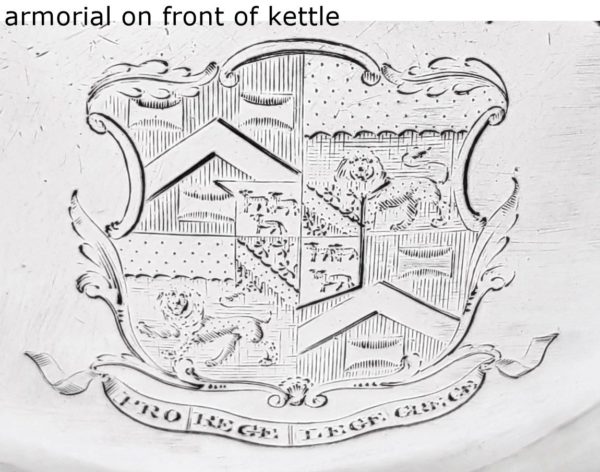 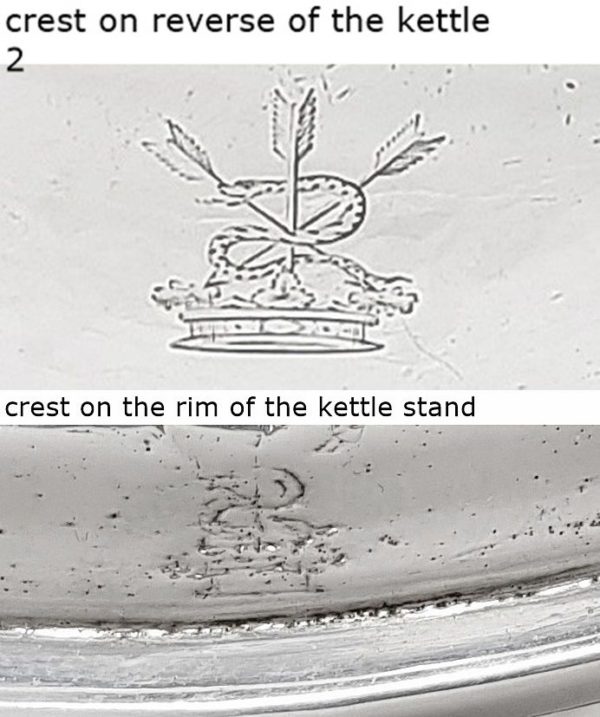 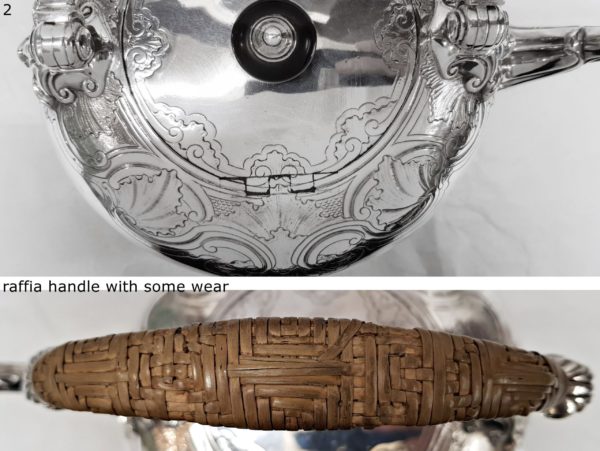 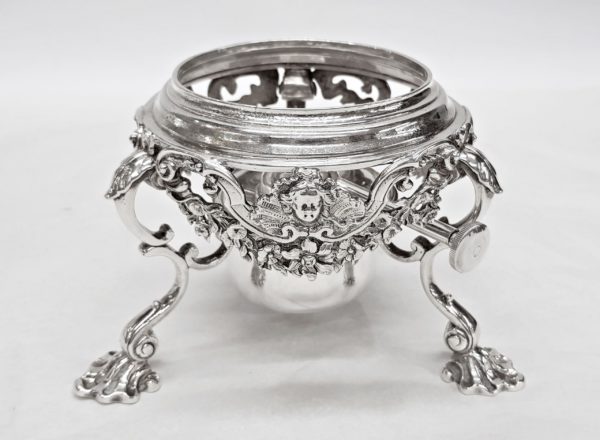 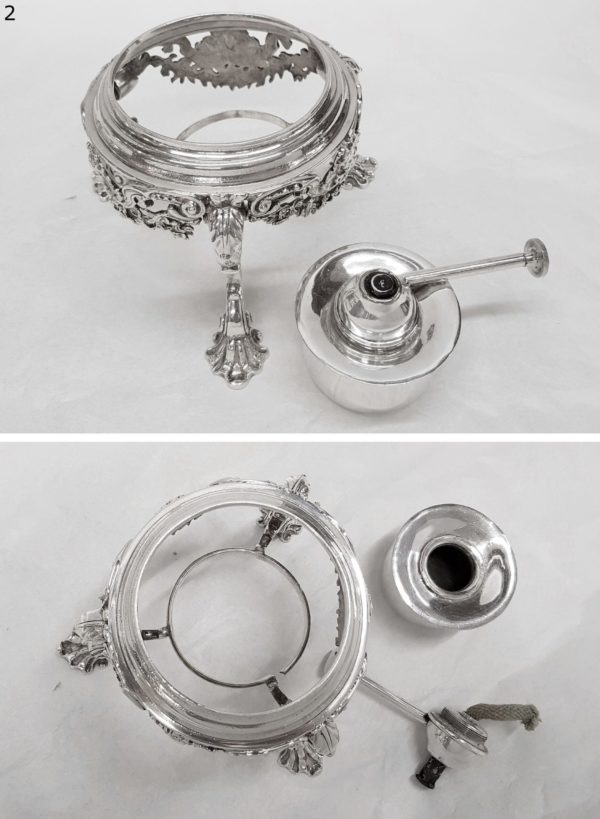 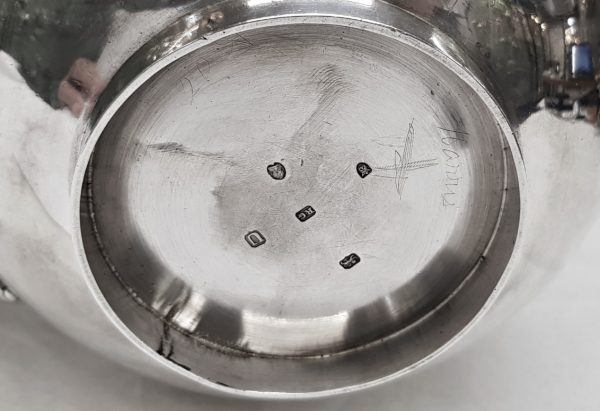 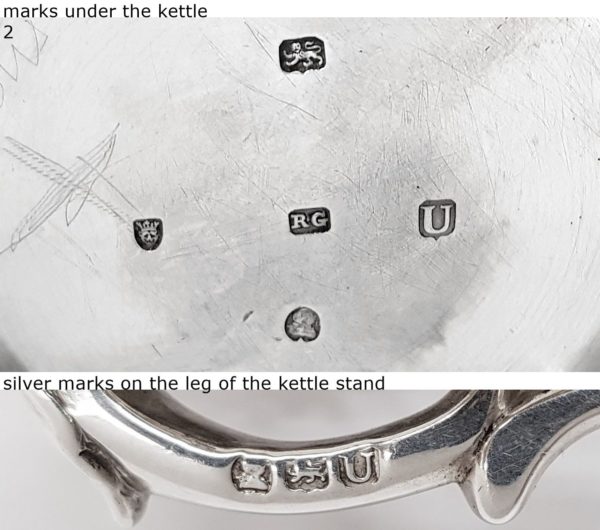 A magnificent antique sterling silver samovar with hand chased decoration and folding handle with raffia finish. The matching silver tea kettle stand has an ornate cast and pierced frieze with face masks, and stands on large shell feet; the detachable burner has a rise and fall wick. An excellent piece with heavy gauge silver and good colour. Hand engraved to the front is a large hand engraved armorial with the motto “Pro Rege Lege Grege”. To the reverse is the crest of a serpent over a crown, repeated on the kettle stand.

Signed/Inscribed: The crest “Pro rege, lege, et grege” translates as “For the king, the law, and the people”. This is an 18th-century motto of the Polish-Lithuanian Commonwealth and then of Poland. The crest of three arrows entwined with a snake over a ducal coronet is the Ponsonby-Fane Family Crest.

This impressive antique silver kettle is in very good condition with no damage. With a full set of matching English silver hallmarks under the kettle, lid with lion and date letter "U", stand with duty mark, lion and date letter "U"; the oil reservoir is a replacement, unmarked and made of silver plate. The kettle engravings are still crisp, some wear to the crest engraving on the stand. The raffia to the handle has some wear.

George Wickes (1698–1761), London silversmith, founded the business that was to become Garrard. Wickes entered his mark in 1722, moving to Panton Street off Haymarket in central London in 1735 as a goldsmith and provider of jewellery and other luxury items to aristocratic patrons. Wickes, an accomplished silversmith known for his work in the rococo style, gained the patronage of Frederick, Prince of Wales. Two apprentices of Wickes, John Parker and Edward Wakelin, purchased the business on Wickes’ retirement in 1760, replaced by John Wakelin and William Taylor in 1776. Following the death of William Taylor, Robert Garrard became a partner in 1792. Garrard took sole control of the business in 1802, with his sons Robert Garrard II, James and Sebastian succeeding him in running the company, trading as RJ & S Garrard (Robert Garrard & Brothers) until James’ retirement in 1835, when the company became R & S Garrard. The company remained in the hands of the Garrard family until the death of Sebastian Henry Garrard, great-grandson of Robert Garrard senior, in 1946. The name Garrard & Company Ltd was registered in 1909, and the company moved to new premises in Albemarle Street in central London in 1911. In 1843, Queen Victoria appointed Garrard to the position of Crown Jewellers, leading to the production of numerous pieces of silverware and jewellery for the Royal Family, as well as the upkeep of the Crown Jewels.

More detailed information about deliveries, returns and how to pau is available in the Help section at the bottom of this page.