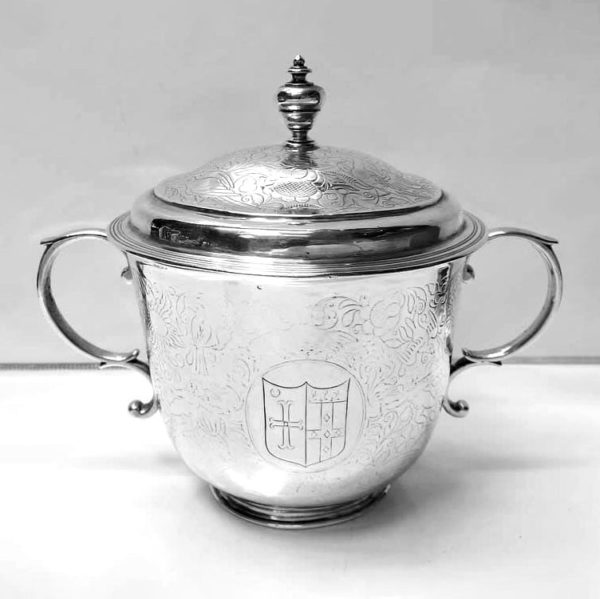 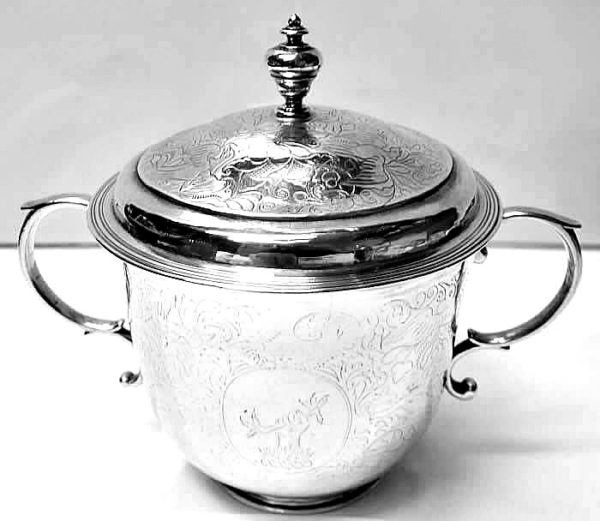 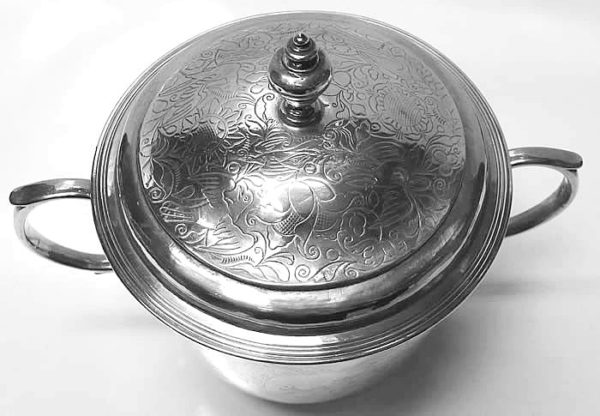 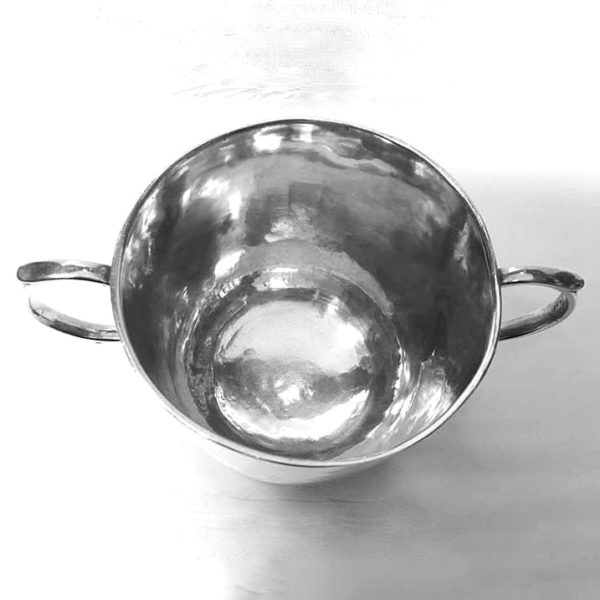 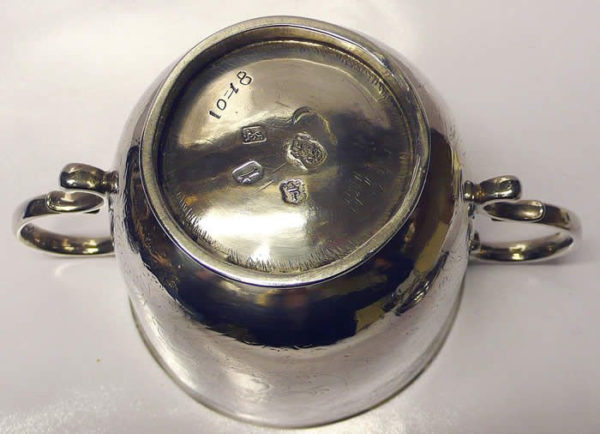 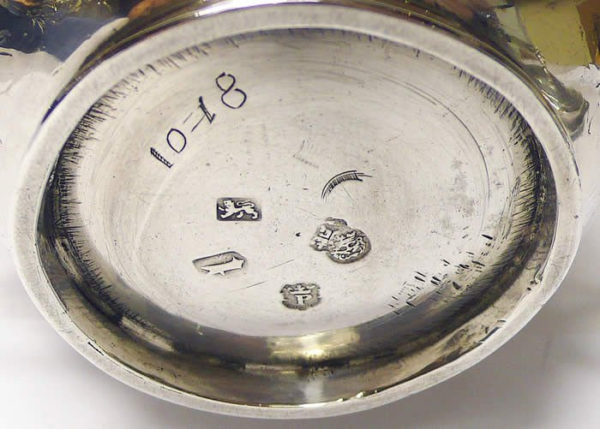 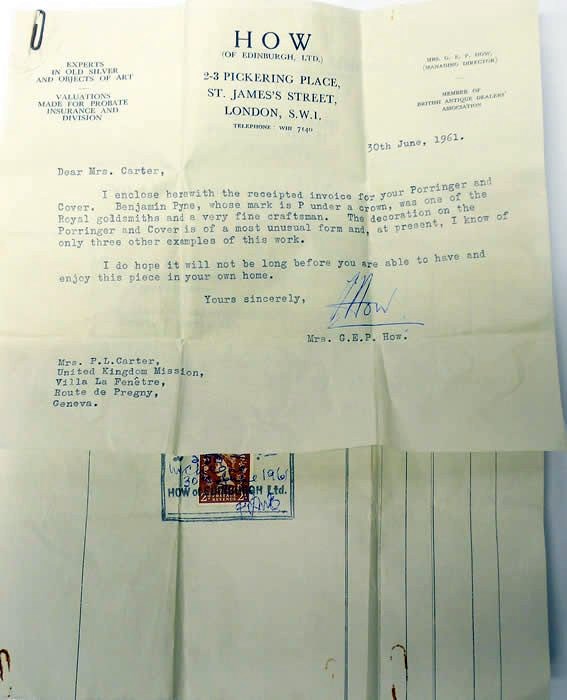 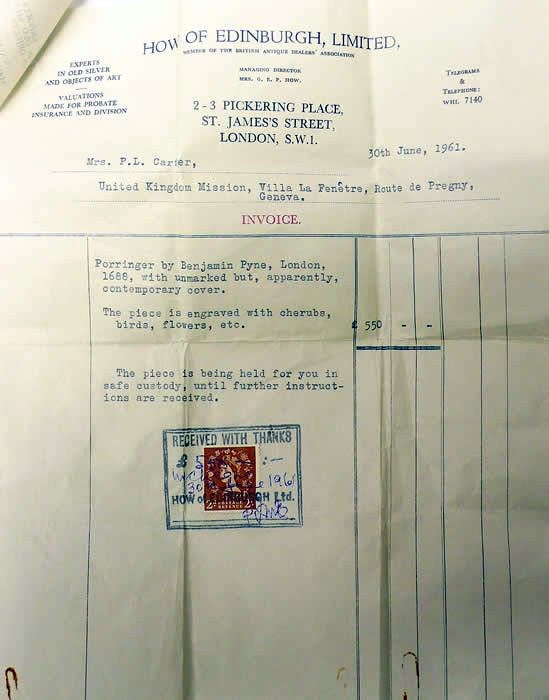 A rare early English silver porringer with matching lid having engraved decoration of cherubs, birds, flowers etc. This chinoiserie decoration was popular over about a ten year period – it is rarely found and adds considerably to the piece. Excellent colour. This charming piece has an armorial to the front and a crest to the reverse. This porringer was sold in 1961 by the famous silver expert Mrs G.E.P How of Pickering Place, St James, London and she describes it in the accompanying paperwork (see photos) as being “of a most unusual form …….I know of only three other examples of this work”.

Marks. The silver marks underneath the porringer are crisp and easy to read. The lid is unmarked which is quite normal at that date and it seems contemporary.

View our article on chinoiserie silver

Literature: he London Times said in its obituary of Mrs. How: Mrs G. E. P. How, silver expert, was born on January 2, 1915. She died on June 26, 2004, aged 89.
A legend in the art world almost as much for the startling trenchancy of her utterance as for her impeccable scholarship and taste, Mrs. G. E. P. How was perhaps the last surviving link to the heroic age of antique dealing before the war, when great discoveries were made and dealers were becoming more than mere merchants of curios. Mrs. How stood out from the first by her scholarly energy and integrity, and she became one of the most influential dealers of her time.

Jane Penrice Benson was born in 1915, the posthumous daughter of an officer killed in the war. The family had been based in South Wales, though she herself grew up in the Home Counties. Her early ambition was to be an archaeologist; it was accidentally transmuted into silver when a neighbour suggested that she would enjoy helping to catalogue his collection of early spoons. (The fascination of spoons is that they are the only form of silver to survive in any quantity from the Middle Ages and the early Renaissance; without them it would be impossible to map the early history of the craft.) The expert she was to assist was Commander G. E. P. How, RN (retd), who turned out to be a jovial gentleman dealer with some considerable knowledge and a not entirely unpiratical bent. It was not long before the young Miss Benson was enthralled by man and subject alike.The Ellis catalogue on which they worked is still a useful reference book, and Miss Benson moved to work with George How, and eventually, after his divorce, to marry him. The Commander and the Commando, as they were soon known, threw themselves into new research, living, breathing and in some cases sleeping with their spoons.

As dealers, the Hows were a new breed, coming from a background very different from that of the traditional silver merchant, and they owed a lot to their contacts, to their social ease and an unquestionable sense of gentlemanly integrity. Their shops were fitted out to look like a collector’s drawing room, and indeed they held open house in the evenings for collectors to come to talk about silver. The Hows also offered more intellectually than much of the competition. They were among the first to persuade collectors to insist on the highest quality and untouched condition, however modest the piece. The greater importance this placed on the historical value of silver appealed to discerning customers, even of small means, and to museums here and in America. (Her) pugnacity could make her seem a fearsome, if diminutive, figure, especially when encountered on the serious ground of silver. But though few were spared the rougher edge of her tongue, no one could be in doubt as to her enormous underlying generosity. No serious scholar was ever refused help, and her personal kindness was great, if discreetly performed.

This desirable antique silver cup with cover is in very good condition. The engraving is a bit worn in places which can be expected from a piece of this age.

Benjamin Pyne, apprenticed to George Bowers 1667, free 1676. The maker's mark "single letter P under a crown", found shortly after 1680, appears on the 1697 copper plate at the Goldsmith's Hall, and reappears after 1720, again unentered, can safely be attributed to him. His only authenticated marks are two entered as a largeworker, undated, probably entered in 1697 on commencement of register. He held the position of Subordinate Goldsmith to the King for the coronation of George I only. His son Benjamin was apprenticed to him 21 October 1708, free 8 May 1716 and was elected Assistant Assayer in 1720. By the end of the seventeenth century Pyne was obviously, from his surviving work, a front ranking London goldsmith and shared with Anthony Nelme the main responsibility of upholding native standards against Huguenot competition, even though it's more than likely that he and Nelme employed (or bought up and remarked the work of) the latter to some extent. Nelme's connection with Hoare's bank seems to have continued for a considerable period and is perhaps responsible for the quantity of orders for municipal maces, regalia and church plate he obtained. However the end of his life was sad. On 17 January 1727, when he must have nearly been 75, he resigned from the Livery, probably due to ill health and bad eyesight, and petitioned with others for the place of Beadle to the Company, vacant by the death of John Bodington, and was elected the same day to the post.