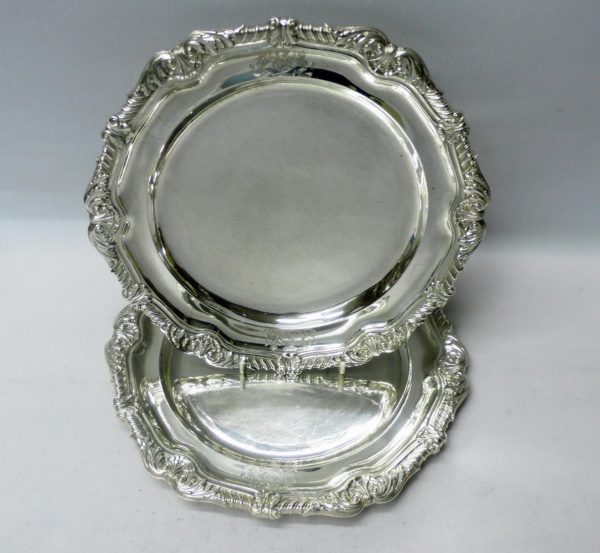 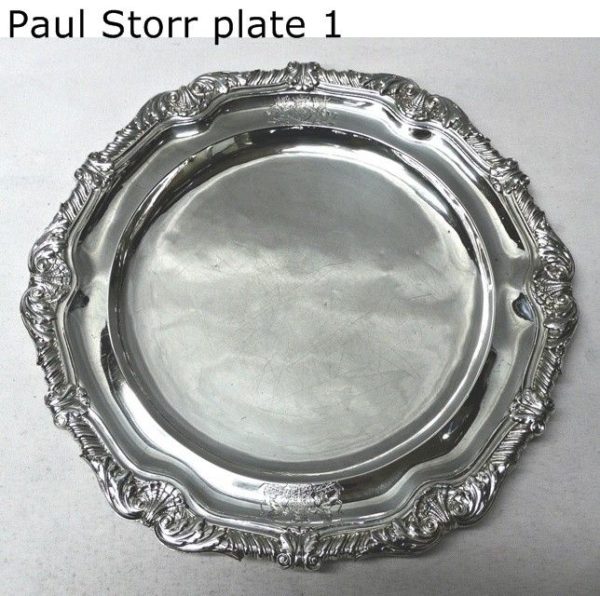 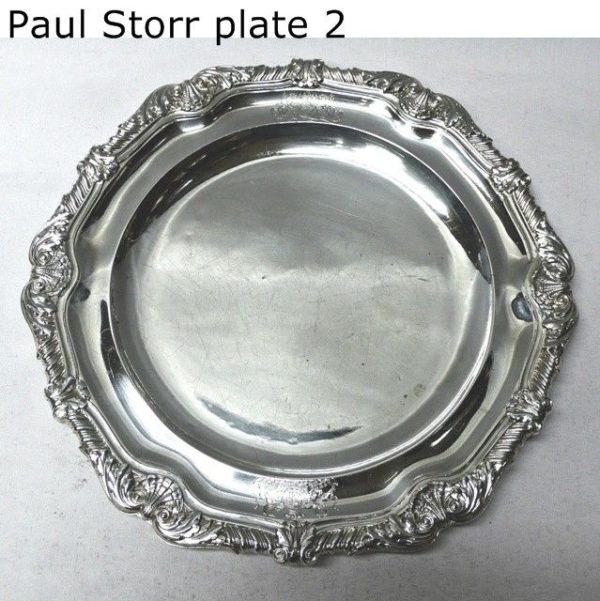 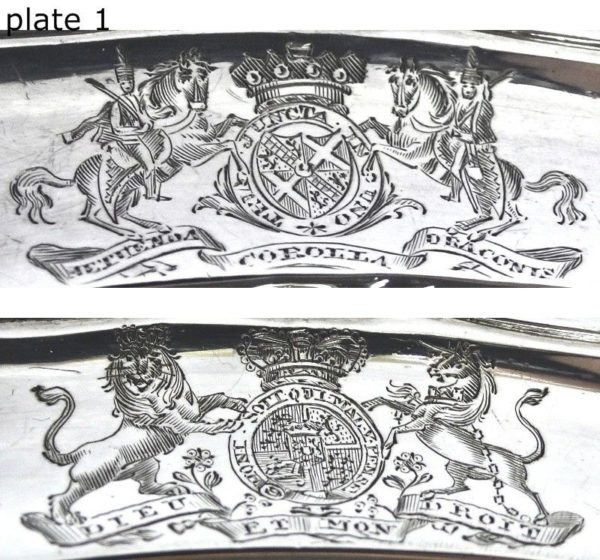 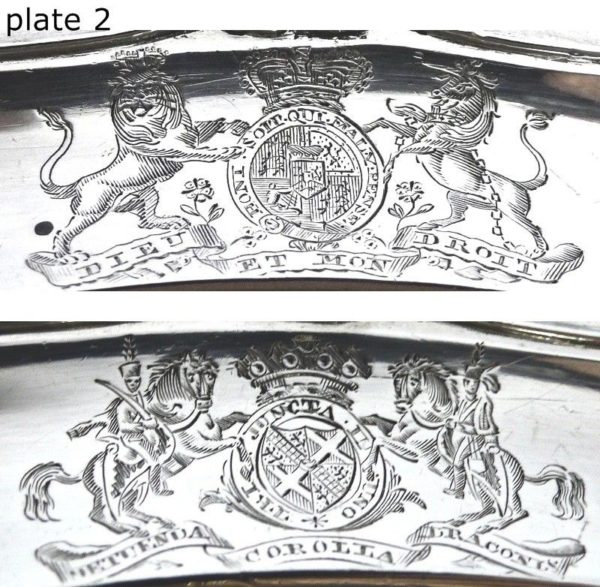 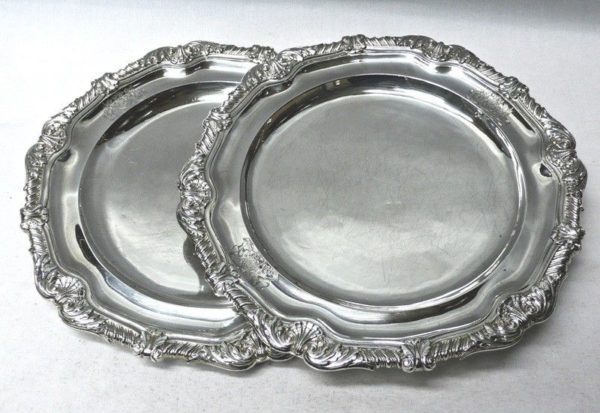 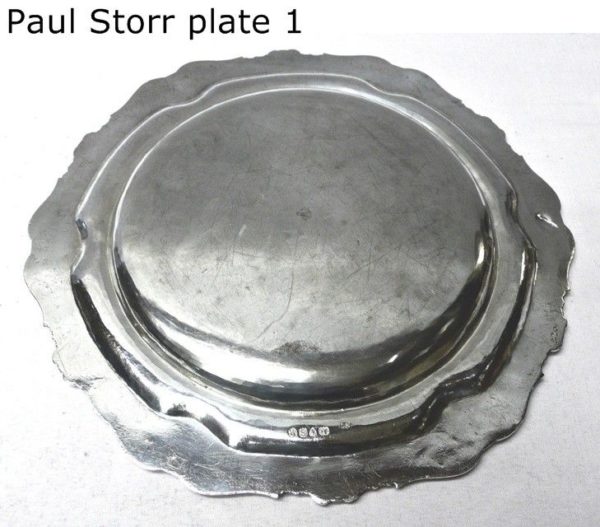 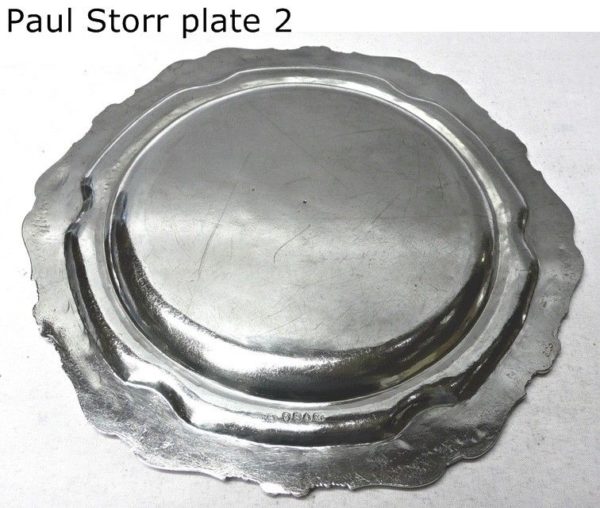 An important pair of antique sterling silver plates with plain styling and magnificent shell and gadroon borders. Excellent quality and...

An important pair of antique sterling silver plates with plain styling and magnificent shell and gadroon borders. Excellent quality and manufacture as you’d expect from this world famous silversmith. Hand engraved to the top and bottom rim there are two crests and mottos for the Marquis of Londonderry* and the Order of the Bath. The underside bears the pattern number 820. Total weight 1515 grams, 48.7 troy ounces. Diameter 26.25 cms. London 1813. This handsome pair of ambassadorial silver plates were made by the celebrated London silversmith Paul Storr (1771-1844) for 1st Baron Charles William Stewart, later 3rd Marquess of Londonderry (1778-1854), on his appointment as ambassador at Vienna on 27 August 1814.

Literature: Known by his admirers as “Fighting Charlie”, and by his detractors as “The Golden Peacock”, Stewart was a soldier and diplomat whose vivid life touched on many of the great events and personalities of the early 19th century.

The only son of Robert Stewart, first marquess of Londonderry (1739–1821), and his second wife, Frances (d. 18 January 1833, aged eighty-two), eldest daughter of Charles Pratt, first Earl Camden, Charles Stewart was born in Dublin on 18 May 1778. The first marquess was an Irish politician of note who devoted much of his life to improving his Irish estates at Mount Stewart in Co. Down, advancing the causes of his tenants and re-modelling the magnificent family seat to a design by George Dance.

Commissioned in the army in 1794, Charles Stewart was immediately pitched into the war with France serving on Lord Moira’ staff in the Campaign of 1794-5 in the Netherlands then joining General Craufurd in Austria where he was wounded in the face by a musket ball. Through purchase and preferment, by 1799 Stewart was lieutenant-colonel of the 18th light dragoons returning on Campaign to the Netherlands the same year, where he was again wounded. Back in England, Stewart was made colonel and aide-de-camp to the king but with no prospect of the British army campaigning further on the continent Stewart turned to politics taking a seat on his family’s interest in Londonderry: first in the Irish parliament then, after union in 1801, in the House of Commons. In 1807, he was appointed under-secretary to his elder half brother Lord Castlereagh in the war department, a position he retained until 1814.

In 1808 the Campaign in the Iberian peninsular brought Stewart back to active service. He was put in command of the hussar brigade under Sir John Moore in Portugal. Following the retreat from Corunna, Stewart returned to Portugal as adjutant-general in the army of Sir Arthur Wellesley (later Duke of Wellington) demonstrating reckless verve in charges with the dragoons at Rueda and Porto which earned his commander’s displeasure but also grudging respect for his bravery. Although present at the battles of Talavera and Cuidad Rodrigo, reservations over Stewart’s temperament and judgment under fire – he was said to be always wanting to take a “gallop with the Hussars” – prevented him achieving higher command. Wellington also suspected Stewart of political scheming with his brother Castlereagh who was appointed foreign secretary in 1812.

His military ambition apparently thwarted, Stewart reluctantly returned to politics. In 1813 he was appointed knight of the Order of the Bath then, the next year, created Baron Stewart of Stewart’s Court and Ballylawn in the County of Donegal. His coat of arms, as seen on the plates, were augmented with the motto of the Order of the Bath surmounted by a baron’s coronet with supporters modelled as two hussars in the full uniform of the 18th Light Dragoons. As British minister to the court at Berlin, Stewart signed the treaty of alliance against France between Prussia, Britain and Russia on 27 April 1813. He was then present in an active military capacity in several engagements with the French and was one of the very few British officers who witnessed the decisive battle of Leipzig on 16 October where he led a charge of the Brandenburg hussars. He then joined the allies on the advance into France seeing further action until Paris was reached on 31 March 1814.

Now emblazoned with foreign orders and decorations, Stewart was appointed ambassador to Vienna attending, with his brother Castlereagh and Wellington, the congress convened there to determine the future of Europe following the fall of Bonaparte. However, his dissolute behavior, womanizing (he was widowed in 1812) and preposterous love of display, which earned him the sobriquet of “The Golden Peacock”, created more comment (and enjoyment) than his skills of diplomacy. Nevertheless, Stewart persisted in his political career and after his brother’s suicide in 1822, when he unexpectedly succeeded as 3rd Marquess of Londonderry, he agitated for further rewards although he had created too many enemies by his apparent scheming to achieve high office. Instead he turned to furthering, and financing, the rising cause of conservatism as a close ally of Sir Robert Peel.

In 1819, Londonderry married secondly Frances Vane-Tempest (1800-1865), daughter of the immensely wealthy Sir Harry Vane-Tempest. To secure her inheritance, Londonderry changed his name from Stewart to Vane by Royal Licence and together with his talented wife worked on improving her family’s estates around Wynyard Hall in County Durham and their valuable interests in the coal industry. Although increasingly marginalized from politics, Londonderry lost none of his fighting vigor intervening in national affairs and fighting two duels, the second in 1839 when he was over sixty. Despite their differences over many years, Londonderry was a pallbearer at the funeral of the Duke of Wellington dying himself two years later on 6 March 1854.

Signed/Inscribed: Armorial 1 is the Order of the Garter (the Royal Coat of Arms), the highest order of chivalry. The motto “Honi Soit Qui Mal y Pense” means “Evil (or shame) be to him that evil thinks.’ Silverware bearing this armorial would have been supplied by the reigning British monarch as part of the costly ambassadorial silver for the British ambassador upon his appointment. The motto below “Dieu et mon droit ” means “God and my right (the motto of the British monarch). Armorial 2 is the Order of the Bath, a British order of chivalry. The Order’s motto “Tria Juncta In Uno” means “Three joined in one”. The motto below “Metuenda Corolla Draconis” means “the dragon is to be feared” and this is the motto of the Marquis of Londonderry.

These antique silver platters are in very good condition with no damage or restoration. Excellent quality as you'd expect from this much prized maker. Lovely crisp mounts. The hand engraved crests and mottos are still sharp. Good colour. Clear and matching marks which are easy to read. There is some light surface scratching, these plates have not been erased. Everything is as it should be, all original and fully functional. Please note that this item is not new and will show moderate signs of wear commensurate with age. Reflections in the photograph may detract from the true representation of this item.