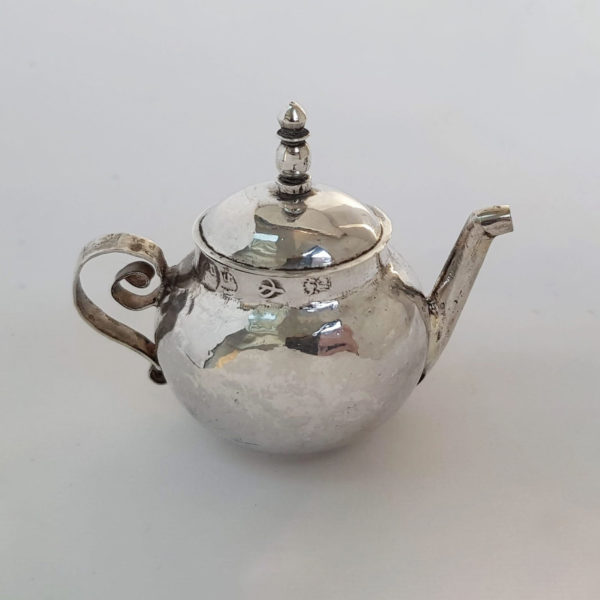 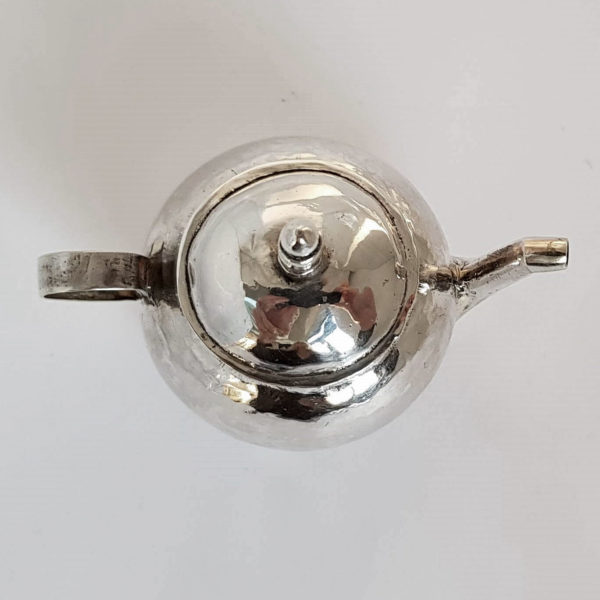 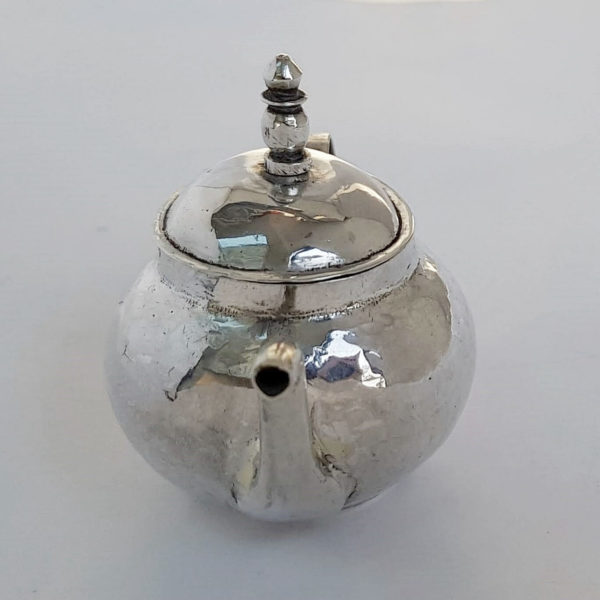 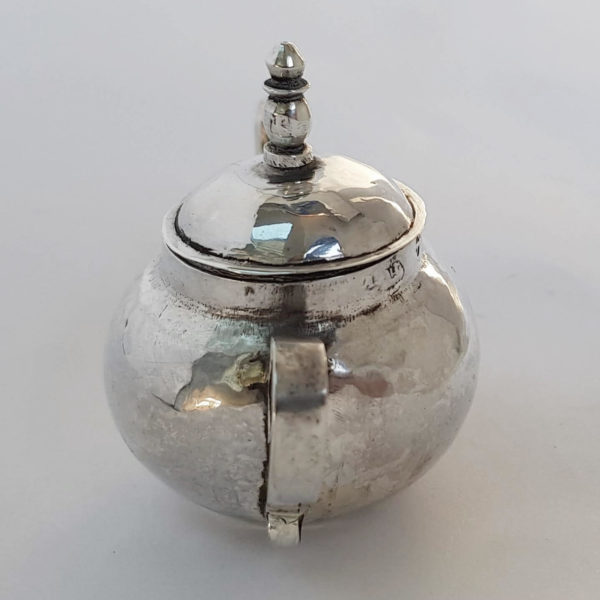 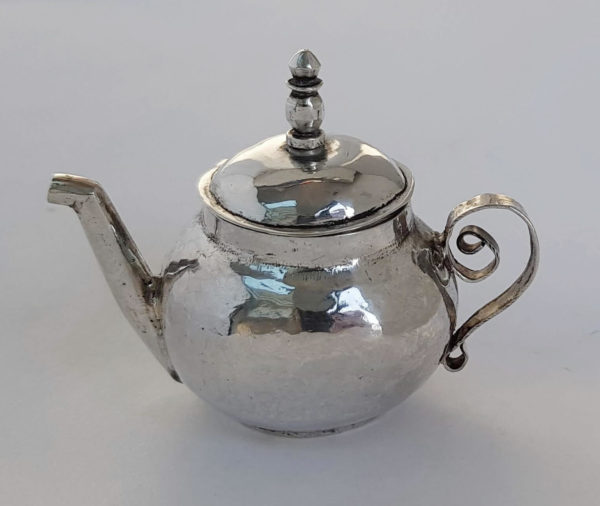 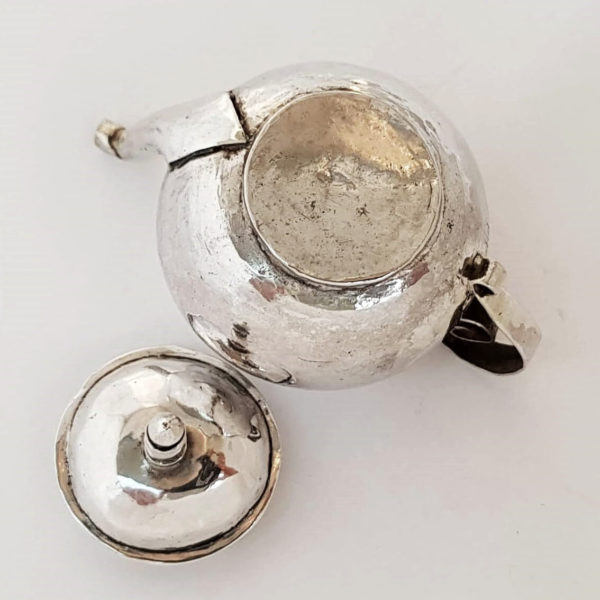 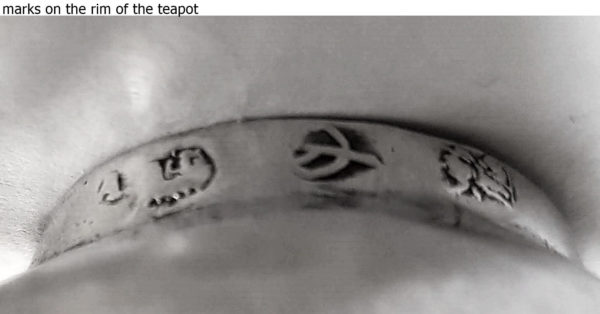 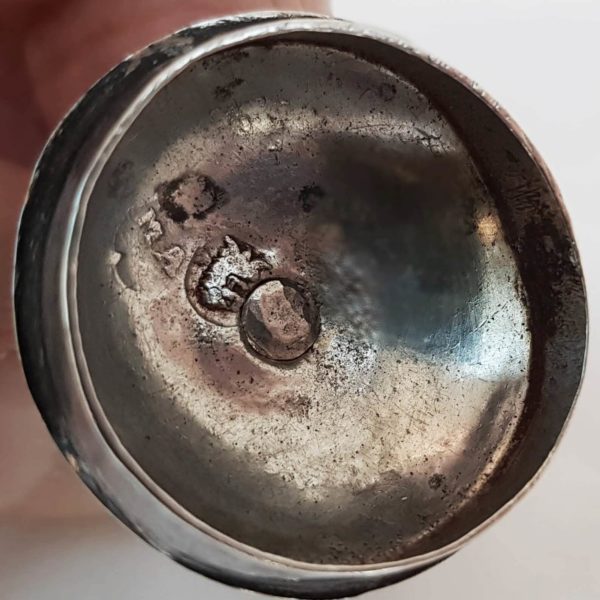 A delightful little collector’s piece. A rare antique silver teapot miniature with a simple scroll handle and pull off cover....

Drinking tea became fashionable in England during the 17th century. Early teapots were of small capacity because of the rarity of tea. Although there are a few 17th century teapots in existence it would be rare to find one dating before 1710.

* Britannia Standard silver is 95.8% pure. In 1696, so extensive had become the melting and clipping of coinage that the silversmiths were forbidden to use the sterling standard for their wares, but had to use a new higher standard, 95.8 per cent pure. New hallmarks were ordered, “the figure of a woman commonly called Britannia” and the lion’s head erased (torn off at the neck) replacing the lion passant and the leopard’s head crowned. This continued until the old standard of 92.5 per cent was restored in 1720. Britannia standard silver still continues to be produced even today.

Literature. Silver toys originated in Europe during the 17th century and were made initially for the children of kings and queens. At that time England was still suffering under Puritanism and it wasn’t until the Restoration of Charles II in 1660 that silver toys were made available in this country. The earliest English silver toys date from 1665 and were made in London; it was uncommon for toys to be made in the provinces. The Dutch were the leading manufacturers of silver toys, their most prolific period being 1725-1750, and by then wealthy royalty, landowners and business men were buying toys for their own pleasure as well as that of their children’s.

The little teapot is in very good condition. Stamped on the rim of the body with a full set of English silver hallmarks, lion and maker’s mark under the lid. Please note that this item is not new and will show moderate signs of wear commensurate with age. Reflections in the photograph may detract from the true representation of this item.