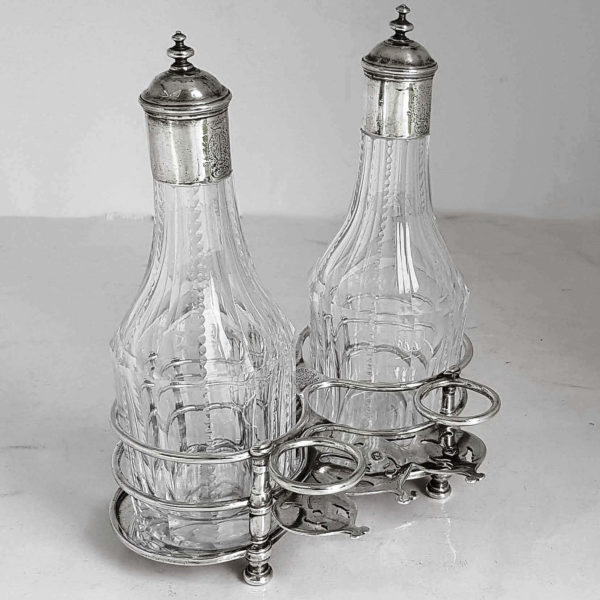 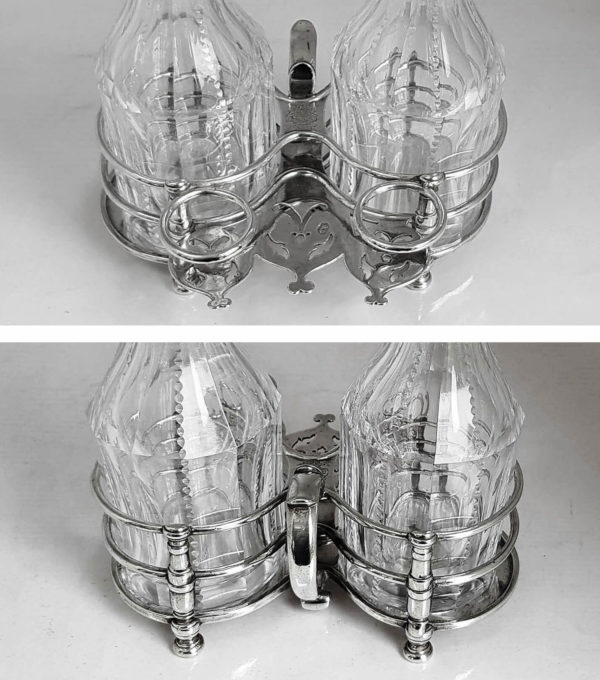 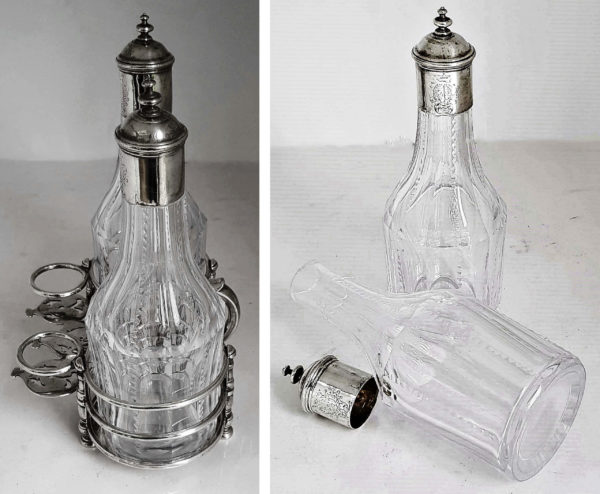 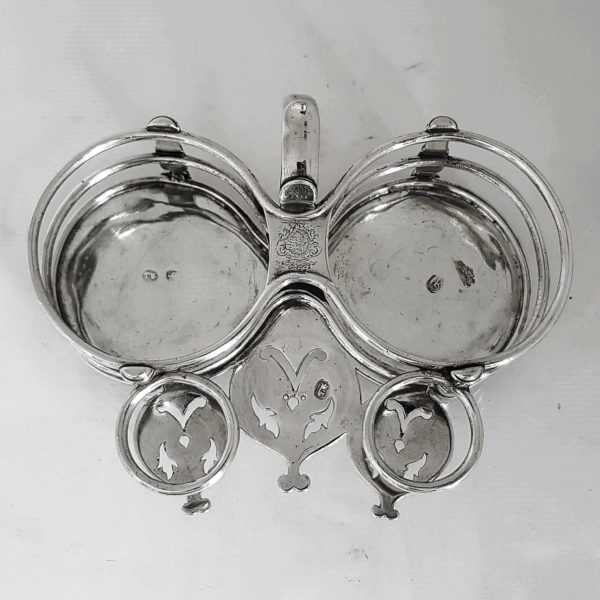 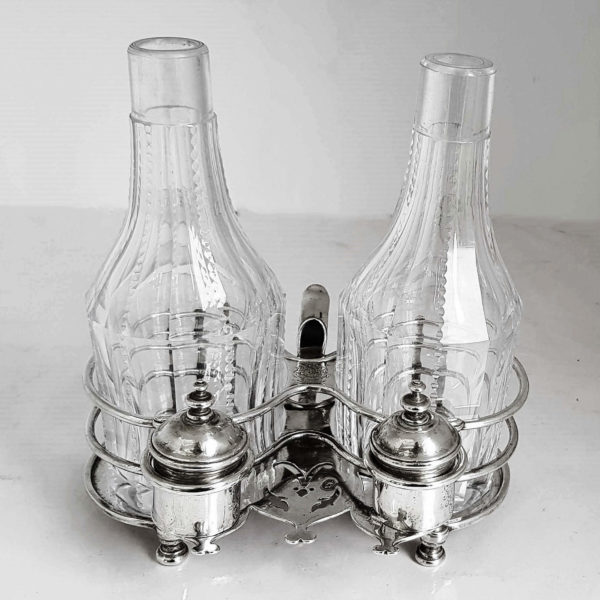 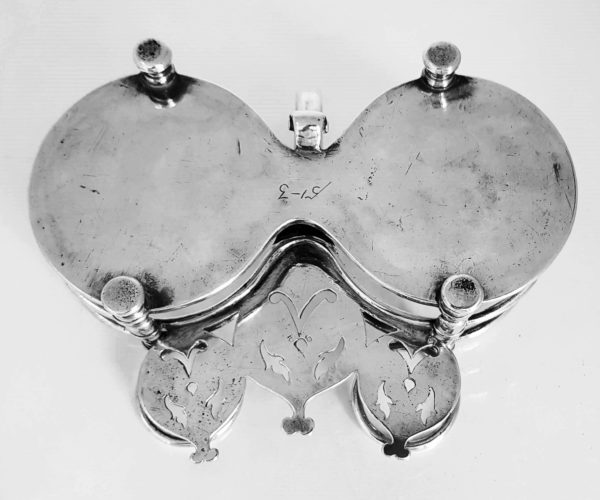 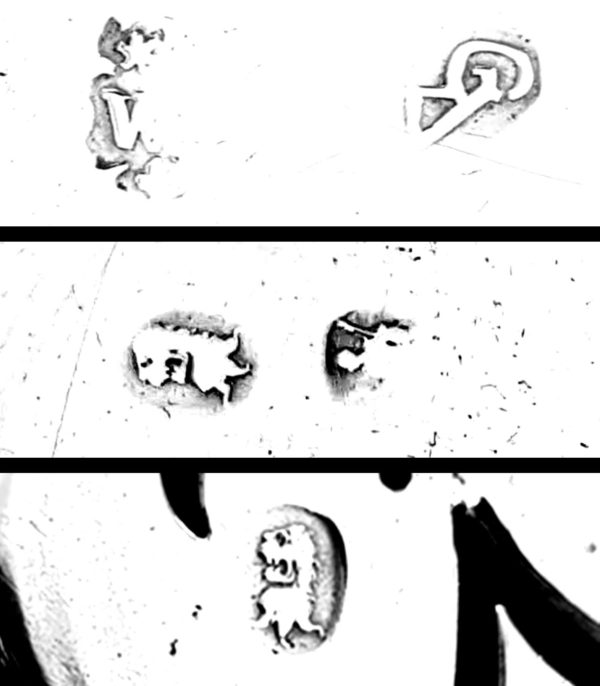 Signed/Inscribed. The stand and bottle tops all have the insignia for the Order of the Garter (the Royal Coat of Arms), the highest order of chivalry. The motto “Honi Soit Qui Mal y Pense” means “Evil (or shame) be to him that evil thinks.’ Silverware bearing this armorial would often have been supplied by the reigning British monarch as part of the costly ambassadorial silver for the British ambassador upon his appointment.

Literature. The earliest antique silver Cruet frames, containing 3 castors and 2 glass bottles, were made from c.1700 onwards. At this early date the two bottle Oil and Vinegar frame was occasionally produced although these were more popular on the continent.

This superb antique silver condiment set is in very good condition. The frame has a full set of English silver hallmarks for London 1704. The bottle tops are unmarked, which is normal for this time, the bottle tops fit snugly in the circular holders on the side of the frame. The bottles are the correct style for the period but are probably not original. The engravings have some wear. All fully functional. Please note that this item is not new and will show moderate signs of wear commensurate with age. Reflections in the photograph may detract from the true representation of this item.

David Willaume, Huguenot maker, born 7 June 1658, son of Adam Willaume, goldsmith of Metz on the Pont des Morts. His first mention in London was in 1686 at the Windsor Castle, Charing Cross. Married Marie Mettayer 1690. Free 1693/94 as David Williams. First mark as largeworker undated probably 1697. Second and third marks 1719. His children were Anne, born 1691, wife of David Tanqueray, David, born 1693, and Adam and Suzanne, born 1694 and 1696, died in infancy. Willaume seems to have retired about 1728 (when David II entered a mark of distinctly different type to his father) and he purchased the Manor of Tingrith, Bedfordshire. Died circa 1741. David Willaume I was an important silversmith and enjoyed the patronage of the wealthiest clients in England. His many outstanding pieces display the highest qualities of rich design and impeccable execution. Among his impressive list of important works are the magnificent pair of wine coolers (Duke of Devonshire), the Luton Hoo toilet service, the pair of ivory mounted vases (British Museum), and the punchbowl and cover (Trinity Hall, Cambridge). David Willaume II, apprenticed to his father the master Hugeunot silversmith David Willaume I in 1707, free 1723. First and 2nd marks entered as largeworker in 1728, roughly the time of his father’s retirement. 3rd mark 1739. He became High Sheriff of Bedfordshire in 1737. Goldsmith to the King 1744 and 1746. Died 1761.