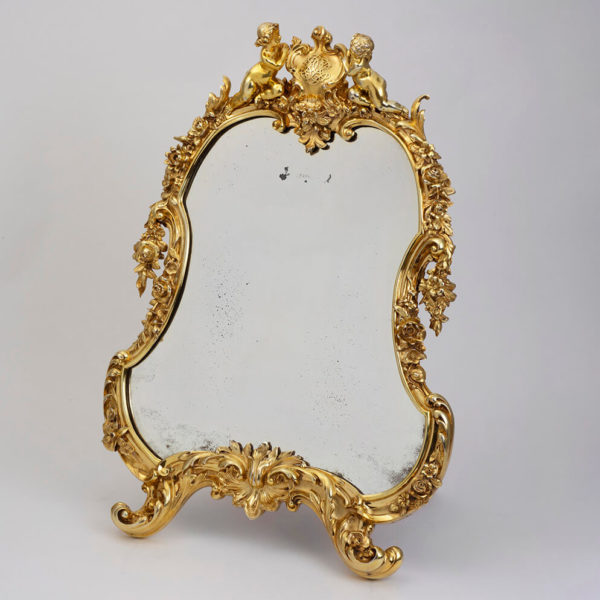 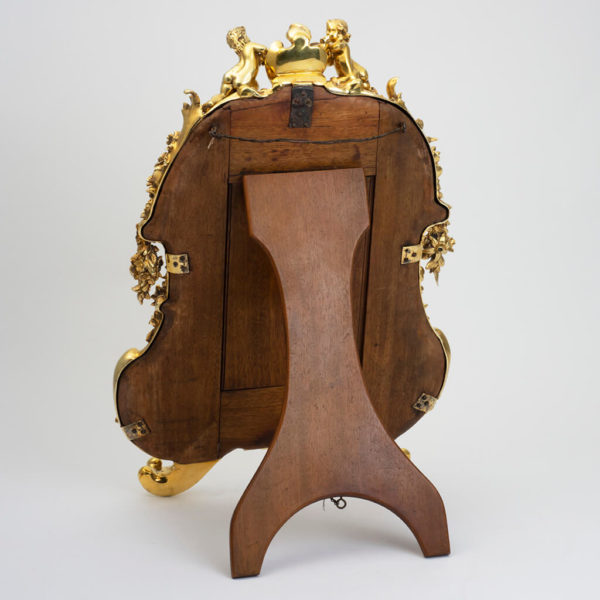 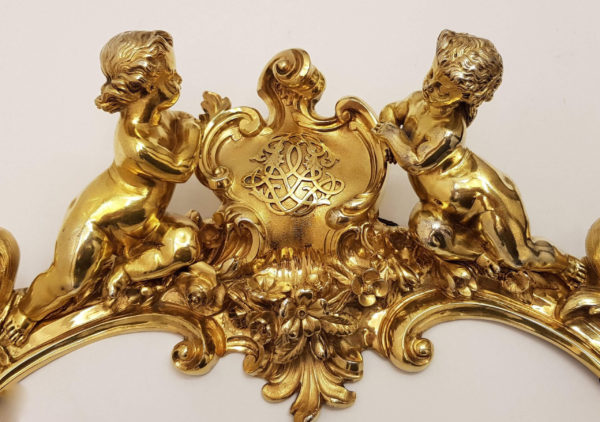 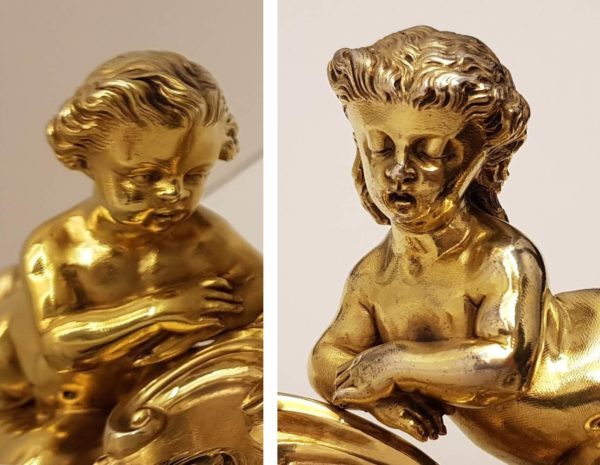 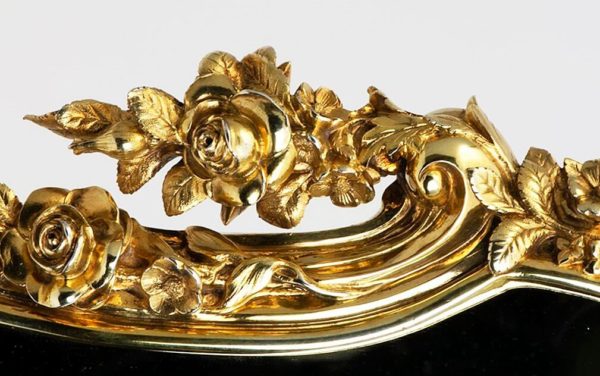 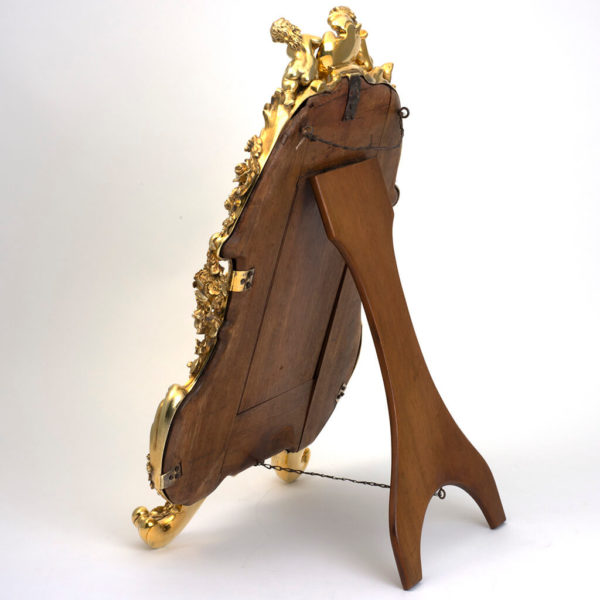 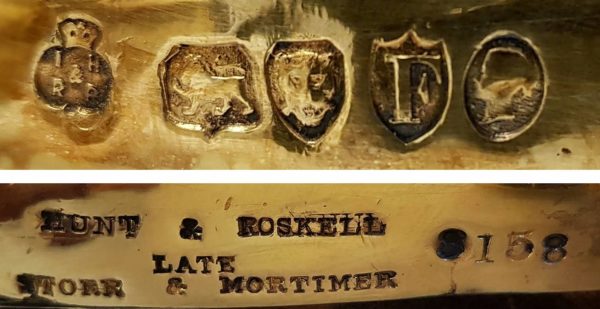 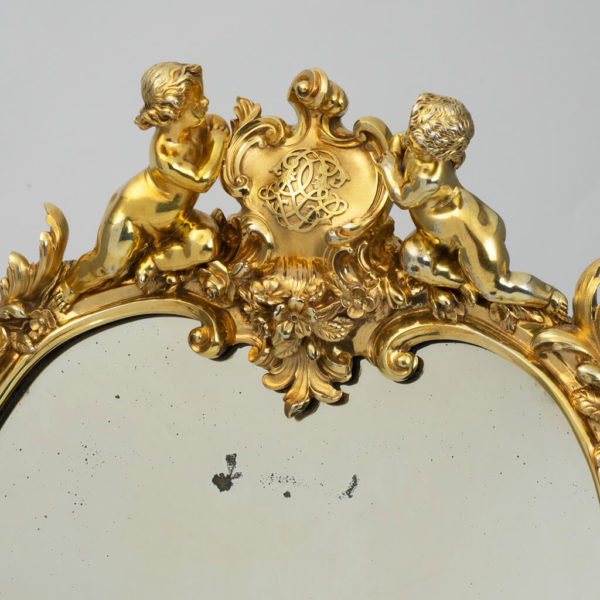 A fine antique silver gilt dressing mirror of waisted form surmounted by two large putti flanking a monogrammed cartouche. The whole frame has magnificent applied decoration in the rococo revival style; the cast pendant floral sprays to the border are particularly stunning. The wooden easel back has hanging hooks and wire.

Marks. Stamped with a full set of English silver hallmarks either side of the frame just above the scrolling feet.

Another mirror by Hunt and Roskell is in the Hermitage Museum, St. Petersburg.
A similar mirror was sold in Sotheby’s New York in April 2010.
Peter Waldron’s book on Antique Silver illustration 709 shows a very similar mirror with ducal coronet about which Waldron states “silver of this type was only made for the grandest household”.

Literature. Antique silver mirrors were comparatively rare prior to the late 19th century. The first examples were usually easel mirrors, made to go with a full dressing toilet set, although the smaller examples were perhaps intended to be hung on the wall.

The silver gilt frame in good condition with light wear on the highlights to the gilding. The mirror glass is old, seems original, and has some wear spots. The wooden back is original, one of the screwed on holding straps has been altered, slight warping to the wood at the top, the easel hinges have replacement screws. The suspension wire at the back is a useful addition.

Hunt & Roskell, a renowned jewellers and silversmiths on Bond Street, London, held the Royal Warrant of Queen Victoria for many years. The firm was the successor to the celebrated silversmith Paul Storr who had left Rundell, Bridge & Rundell to set up his own workshop on Harrison Street near Clerkenwell in 1819. A couple of years later he went into partnership with John Mortimer and began trading from 13 New Bond Street as Storr & Mortimer. In 1826 they took John Samuel Hunt as partner, who brought a welcome investment capital of £5,000 with him. The firm was increasingly successful and in 1838 they moved to new premises at 156 New Bond Street. Paul Storr retired at the end of that same year and the name changed to Mortimer and Hunt operating from 1839-1843. On John Mortimer’s retirement in 1843 the business became Hunt & Roskell, the partners being John Samuel Hunt, his son John Hunt, Robert Roskell Jn. (son of pocket watchmaker Robert Roskell from Liverpool) and Charles Frederick Hancock. The firm grew in size and prosperity creating wonderful pieces of silverware from tea and coffee pots, salvers and candelabra through to presentation plates and cups as well as ornate and decorative table centre pieces. Their jewellery was equally impressive. They exhibited at the Great Exhibition held in 1851 at the Crystal Palace, London and were granted the Royal Warrant by Queen Victoria. Further exhibitions followed both at home and abroad including New York in 1853 and Paris in 1867. By the 1860’s they were reported to be employing 35 people at the New Bond Street shop and a further 80-100 at the factory on Harrison Street. They also worked in collaboration with a large number of additional craftspeople as well as retailing both jewellery and silver from other workshops such as that of Carlo Giuliano and Robert Hennell. The business continued successfully and Robert Roskell’s son Allan and John Hunt’s son John Mortimer Hunt joined in the firm. After the death of John Hunt in 1879, his son and the two Messrs Roskells continued in partnership until 1888 when Allan Roskell and John Mortimer Hunt took over the business between them. In 1889 the partnership was dissolved and the business was sold to J.W. Benson of Ludgate Hill who kept the name and continued trading under Hunt & Roskell until 1897 when it was converted into a limited company Hunt & Roskell Ltd which remained trading until the 1960s.