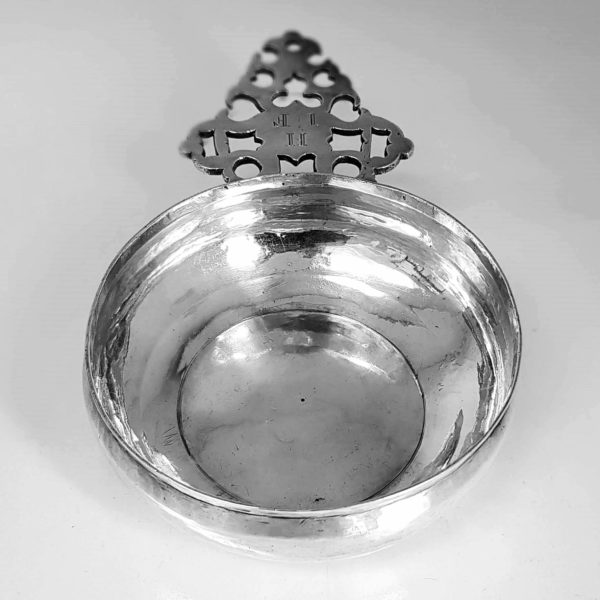 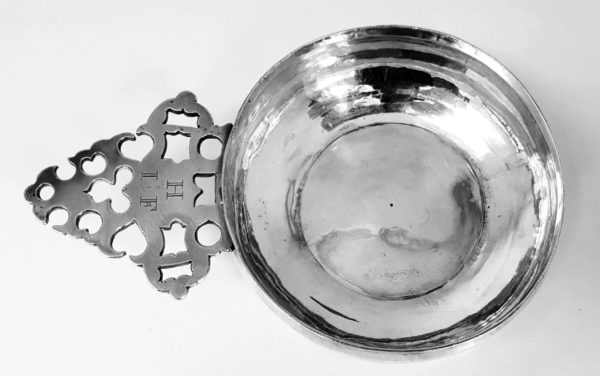 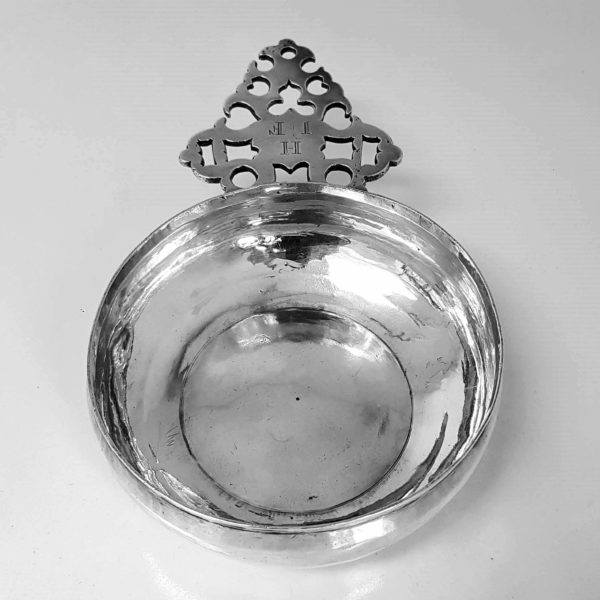 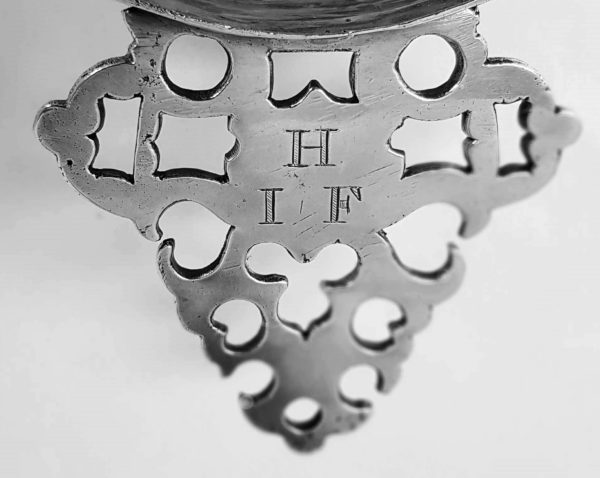 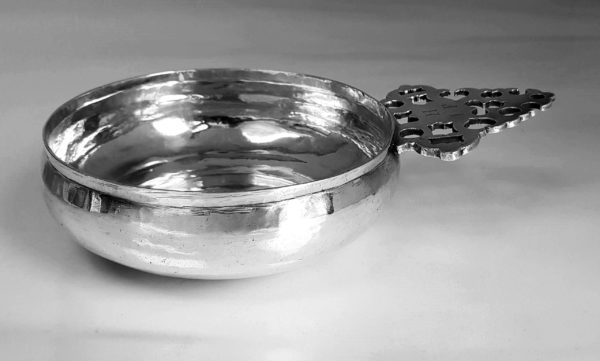 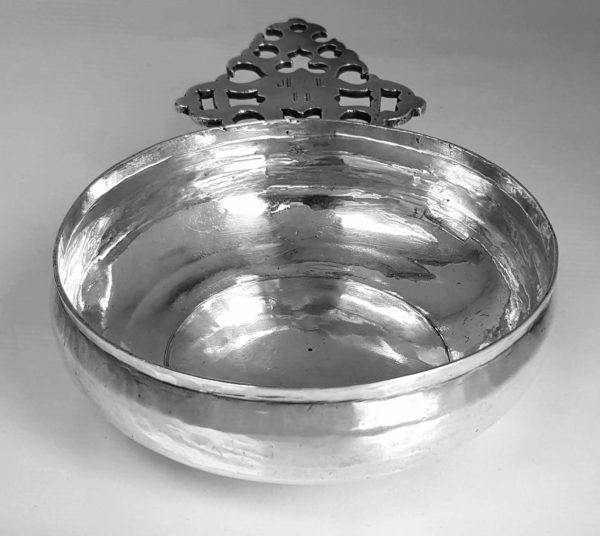 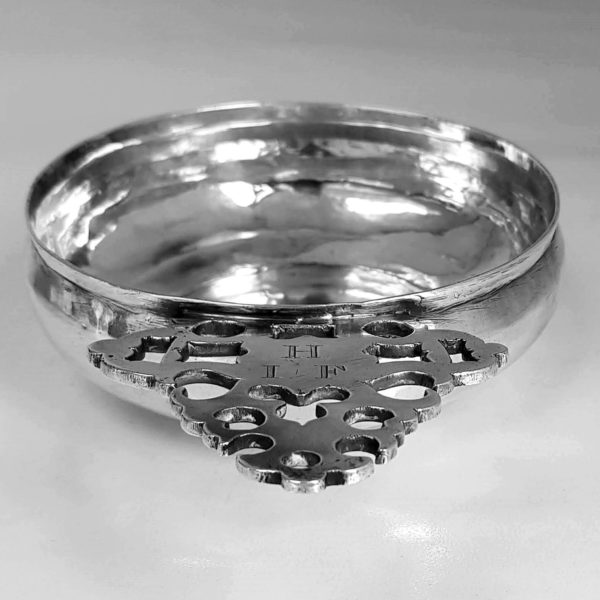 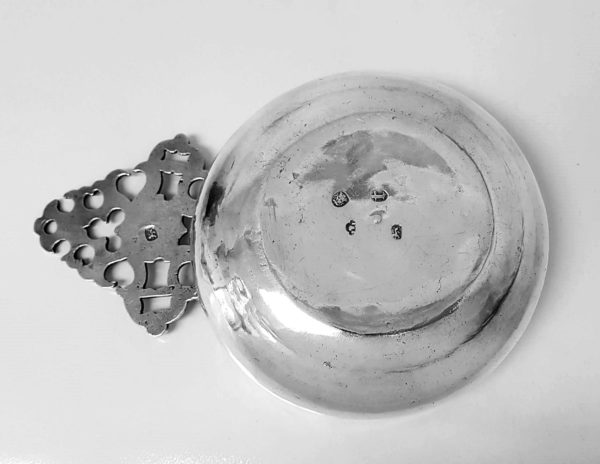 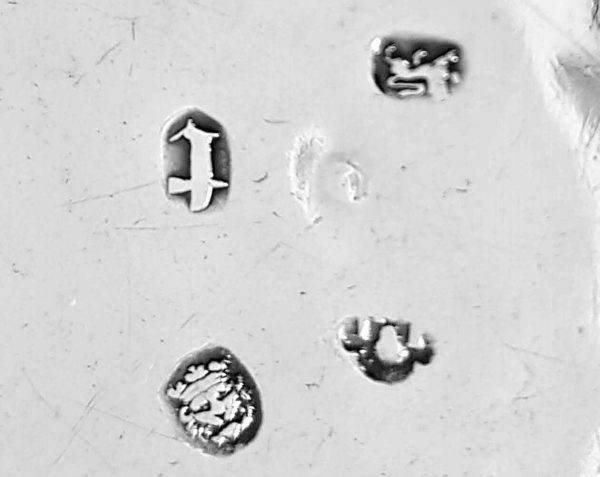 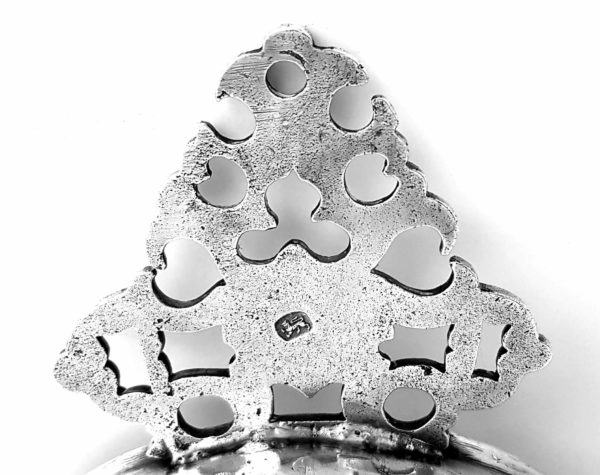 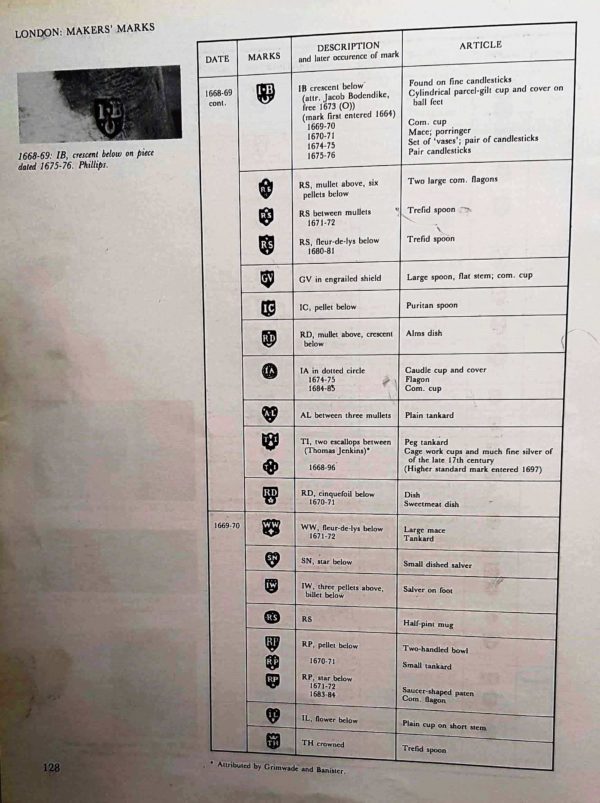 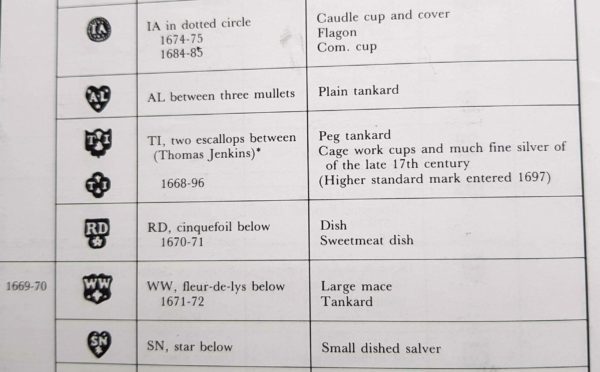 An early English silver side handled porringer (or bleeding bowl) of plain circular form. Very charming with the original hand...

An early English silver side handled porringer (or bleeding bowl) of plain circular form. Very charming with the original hand beaten finish. The shaped and pierced handle has initials hand engraved to the centre. A useful serving bowl, handy for nuts and sweets.

Literature: These shallow bowls are often described as porringers. It’s probably more likely that they were used as a vessel for eating from, especially for feeding the sick, rather than for letting blood. This type of porringer with one ear will either be hallmarked around the rim, or in the centre of the base, either underneath or on the interior.

Signed/Inscribed: *It’s unusual to have a maker’s name for a piece of silver of this early date as there are no precise records of silver makers’ marks prior to 1697. All records were destroyed in the fire at Goldsmiths Hall in 1681 when the Assay Office and apartments of the Assayer and Clerk in the south west wing of the building were burned down.
From 1697 onwards Goldsmiths Hall has preserved a complete record of workmen’s marks, addresses, together with their names and the dates. Sometimes the details of makers can be discovered from old records such as the inventories of noble houses and other institutions. The first surviving record at Goldsmiths Hall is the 1682 copper plate made to start the recording process again. This has recently prompted a study by Dr David Mitchell, supported by Goldsmiths Hall, resulting in the publication of his 2017 “Silversmiths in Elizabethan and Stuart London”. This reference work identifies previously unknown makers marks and assigns marks struck on existing plate to individuals (attributions for 540 separate marks).

This early silver bowl is in very good condition. Stamped underneath with a full set of English silver hallmarks, lion mark to the reverse of the handle.

Thomas Jenkins, London silversmith, no record of apprenticeship or freedom in the Butchers Company. 1st apprentice bound in 1669 and 1st surviving piece with the makers mark TI, two escallops between, dates to 1668/9. A higher standard mark (Britannia) was entered in 1697. Between 1669 and 1700 Thomas Jenkins bound 12 apprentices within the Butchers Company including Jacob, son of Hugeunot goldsmith Samuel Margas, who became free by service in 1706. His own son Richard Jenkins was apprenticed to Ralph Mansell. Assistant 1688. Renter Warden 1692. Third Warden 1693. Master of the Company 1699. Died 1707. Jenkins is described in Jackson's "Gold and Silver Marks" as a maker of much fine silver of the late 17th century.